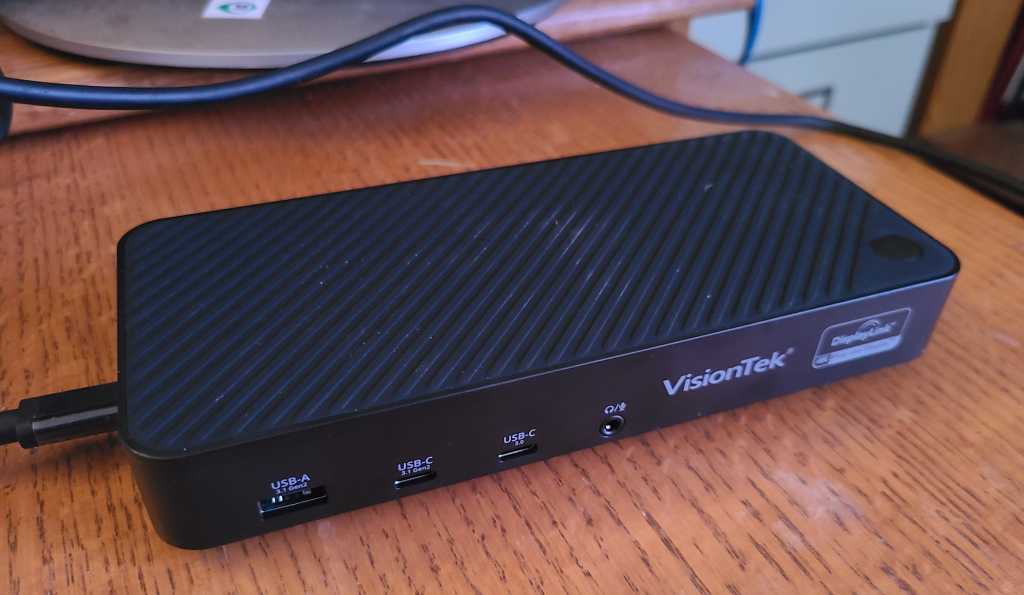 Slash $75 to $100 off of the MSRP, and the DisplayLink dock might make our list of preferred docking stations. As it is, we’re less inclined to recommend it.

First things first: We can’t check to see whether the VisionTek VT7000 Triple 4K Dock supports three independent 4K displays. But it supports two, and supplies a hefty 100W of power to your laptop with a boatload of ports, to boot.

This dock, which uses the DisplayLink compression protocol, will drive 4K displays at 60Hz apiece, and VisionTek claims it will drive three. But our test bench could not accommodate this particular test. Still, we’ve been impressed with how well, and stably, DisplayLink’s 4K-capable docks have been, including VisionTek’s VT7000, for productivity work.

DisplayLink docks walk a middle ground between a traditional USB-C dock and a Thunderbolt dock; they can be used by either a laptop with a traditional USB-C port or a Thunderbolt port instead. DisplayLink technology requires software drivers to be installed to enable the compression, and performance will improve if the USB-C port transfers 10Gbps versus 5Gbps, as most do.

The VT7000 dock itself has a rubbery upper coating, with plastic sides and bottom, where four small rubber feet keep the dock from moving. The dock measures 7.52 x 3.35 x 1.22 inches and weighs 12.4 ounces, rated. It cannot be stood upright, unlike some rivals. Heat isn’t an issue, and there’s a handy dedicated power button to turn off the dock when not in use to save power.

Inside the box, the dock ships with both a 1-meter USB-C to USB-C cable (not Thunderbolt) as well as a USB 3.0 cable with a Type-A connector on one end, and a USB-C connector at the other. A 130W power adapter supplies a rated 100W of charging power to the laptop. A bit oddly, the USB-C cable to the laptop emerges from the side of the dock, though that keeps the other connection and their cables out of the way.

There’s a nice mix of ports, too. On the front of the dock, an audio/mic jack sits close to a 5Gbps USB-C port and a second, though unlabeled, 10Gbps USB-C port. On the far left sits a 10Gbps USB-A port, as well. VisionTek was a bit lazy here, as none of the ports are labeled, and none are explicitly rated to supply power to charge your smartphone.

That matters, as USB specifications (and cables) are confusing enough as it is! But both front-mounted USB-C ports supplied 6.9W via our USB tester, enough to fast-charge a smartphone.

The two rear USB-A ports transfer data at 5Gbps, appropriate for a mouse and keyboard but not for high-speed storage nor charging a phone. Both sit next to a gigabit ethernet port.

The rear display ports make up for this by offering the choice of either a DisplayPort 1.2 port or an HDMI 2.0 port for either of the DisplayLink connections, as well as a dedicated HDMI port with DP Alt Mode enabled. This direct port doesn’t use DisplayLink compression, and can be used if you’re concerned about all of the data passing across the USB-C cable (from ethernet, a mouse and keyboard, and two displays) and creating a choppy experience, or merely to enable a third display.

As a Thunderbolt dock, the VisionTek VT7000 Triple 4K Dock worked well, with rock-solid performance across a pair of 60Hz displays while working with a browser, email, and other office apps. However, connecting the dock to a second device with just a USB-C interface (and the DisplayLink driver installed) caused the displays to act erratically, flickering on and off randomly. Connecting a separate power supply helped, as some laptops equipped with USB-C can’t accept power through those ports.

And despite working perfectly with static content (email, spreadsheets, and the like) across two 4K displays when used as a traditional Thunderbolt dock, playing back protected Netflix content was a bit jittery. Playing back 4K YouTube video was choppy, too—when run at 4K resolution, the video dropped frames like crazy, almost one out of every two. Rebooting seemed to solve the problem, but YouTube then started delivering the content at a lower-resolution bitstream, too.

We’ve generally liked DisplayLink docks because of their flexibility and (at times) lower prices. At about $380, though, the VisionTek VT7000 is somewhat tough to recommend. Essentially, you’re wrestling with DisplayLink’s quirks but at a price where annoyances like that shouldn’t exist. We’d look for something cheaper among our best Thunderbolt docks instead.