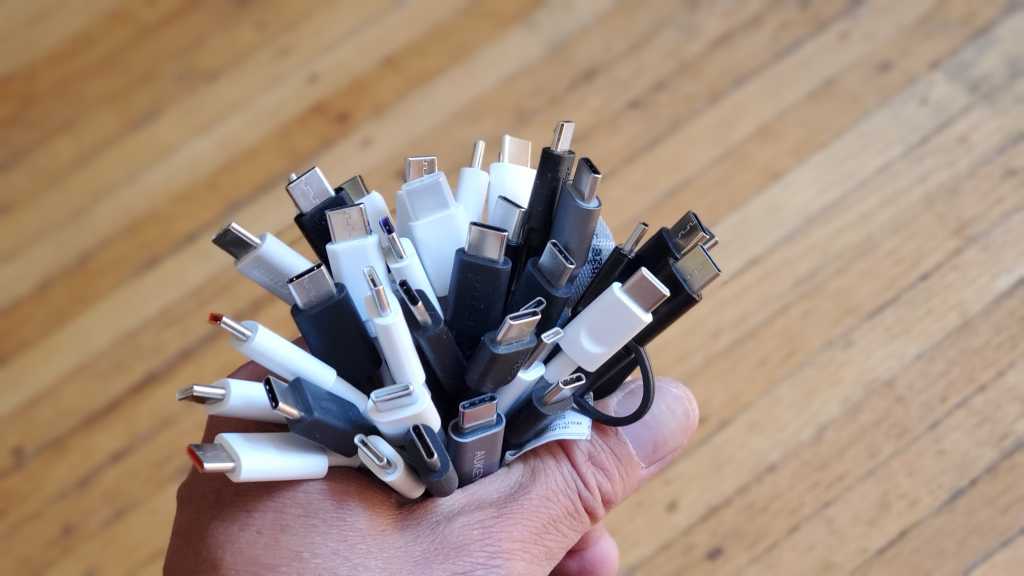 Oh internet, they just came out with USB4 V2 and you just had to lose your s$%# all over again.

Well, I’m here to tell you to calm the hell down because it’s not as bad as you think.

The USB illuminati just announced USB4 Version 2.0, which will double the speed of the original USB4 spec. That sounds good to me, but the internet had to start flipping every single table in sight at the news.

Just chill out, because although the actual logos and verbiage aren’t known for USB4 Version 2.0 yet, I’m damned near certain that’s not what will be printed on the package. How do I know this?

Well, mainly because it’s what was literally said in the original news release: “This update is specifically targeted to developers at this time. Branding and marketing guidelines will be updated in the future to include USB 80 Gbps both for identifying certified products and certified cables.”

So, no, the box won’t say USB4 2.0. Instead, you’ll likely get another version of the same easy-to-understand logo we saw introduced by the USB overlords in 2020 when they decided to actually simplify the branding.

Rather than mention USB4, the number of lanes used, or other confusing stuff that leaves us baffled, a given USB dock, cable, or device should simply feature a descriptive logo, a la “USB 40Gbps” or “USB 20Gbps.” Manufacturers are allowed to also market USB4 40Gbps or USB4 20Gbps but the logos themselves don’t mention the actual specification of USB at all. Just USB and how fast.

Although I don’t know what it will be called, it’s pretty easy to see USB4 Version 2.0’s 80Gbps is probably going to simply be called “USB4 80Gbps,” with the box having a logo stating “USB 80Gbps” on it.

See? Easy-peasy, and nothing to get your undies in a bind over.

Demanding even more details on USB4 Version 2.0 in its name or marketing would be worse.

For example, would it be better to call it USB 5.0? I say no, because the way USB cables and ports work, it may not actually tell you what you want to know: How fast it is. Calling it USB 4.1 would also just take us back to the crazy days of USB 3.0, USB 3.1, USB 3.2 Gen 1, and USB 3.2 Gen 2—raise your hand if you actually know the difference. Few ever do.

Why there’s no space in USB4™

Finally, check your snark at the door over USB4—that’s USB, no space, 4. Yes, it’s a complete break from the familiar USB 2.0, USB 3.0, and USB 3.1 convention, but the reason is simple: You can’t trademark any of those.

This allowed shady vendors to incorrectly mark USB hardware as USB 3.2 without any legal ability to stop them. With USB4, the little ™ on the end means it’s now possible to legally enforce standards for any vendor who describes hardware as USB4. Keep that in mind if you see “USB 4.0” hardware, which could be either intentionally deceptive or the result of a clueless vendor. Regardless, you should think hard and long about buying hardware that doesn’t know the difference.

In the end, if you’ve been spitting hot takes over USB4, you should know that it’s actually designed to improve the consumer experience with USB hardware—not to just annoy the hell out of you.

Yes, USB4 is far from perfect and there will still be some confusion. For example, today’s passive USB4 40Gpbs cables will indeed work perfectly fine and hit USB4 80Gbps speeds under the new USB4 Version 2.0 spec. That’s because USB4 Version 2.0 looks to be using new signaling to increase speeds without forcing you to buy new cables (this will probably be fixed on newer cables marked USB4 80Gbps). But that’s a good thing, right?

And no, I’m not saying USB is easy to understand. In fact, after basically attending USB night school, it’s still confusing to me. For example, the 80Gbps cable above will indeed hit 80Gbps, but only in a port supporting USB 80Gbps speeds. On older PCs it might be limited to 40Gbps or even 20Gbps or 10Gbps. Should the label say “Up to 80Gbps”? Maybe, but there’s only so much you can cram onto a teeny-tiny logo or label.

What I do know is pissing and moaning about it on Twitter and Reddit doesn’t help anyone understand what they need to know, so internet, just calm the F down already.