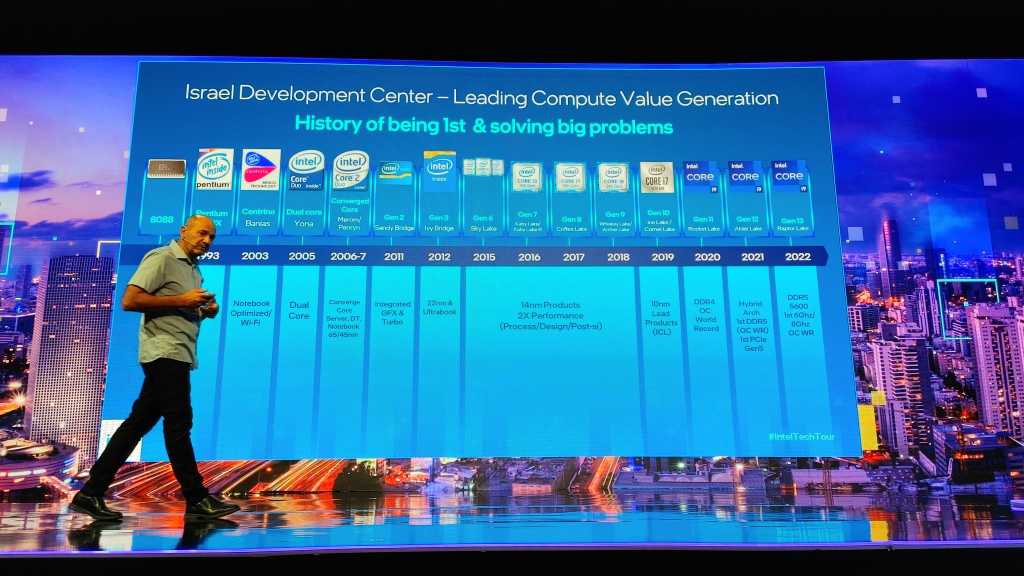 Firing a shot back at AMD official Ryzen reveal, Intel officials said the upcoming 13th gen “Raptor Lake” desktop CPUs will hit 6GHz. Intel’s boost clock of 6GHz for its upcoming chip was revealed at a press event at the company’s famous Haifa design center in Israel, according to numerous press reports.

Much of the briefing is under embargo for the launch of the CPU later this year, but company officials did confirm some performance claims which was covered by Paul Alcorn of Tom’s Hardware here. Alcorn reports that the 13th gen Raptor Lake is touting a 15 percent improvement in single-threaded performance and an eye-opening 41 percent increase performance in multi-threaded performance using SPECintrate_2017. Many consumers may not be familiar with the Standard Performance Evaluation Corporation, but it’s a decades-old industry organization where hardware designers themselves agree what the meaning of “performance” is and to measure it.

Raptor Lake’s 6GHz clock comes two weeks after AMD unveiled that its Ryzen 7000 chips will boost up to 5.7GHz. While both CPUs essentially operate on their own different scales due to power and thermal limits as well as internal core designs, clock speeds still largely influence consumers. And although it’s just a 5.7 percent difference between AMD’s best Ryzen 7000 and Intel’s best 13th gen chip, a nice round 6GHz figure is going to matter more to consumers. The company also showed off liquid nitrogen overclocks of the Raptor Lake hitting 8GHz but that is far less significant for general consumers.

Although Intel is touting a 6GHz clock for 13th gen, it’s not clear if that will come immediately or if it will be limited to a far more special edition version of the chip, Alcorn notes. If it’s the latter, that’s less exciting than all top-end chips hitting 6GHz since “KS” parts usually demand a premium and are generally far more limited in distribution.

Raptor Lake is an emergency edition

Besides its big round numbers, Raptor Lake’s very existence was revealed to be an emergency edition, developed as a contingency plan.

Meteor Lake is, of course, Intel’s next-generation CPU that will move the company from its long-held monolithic chips to a Lego-like, multi-chip design. It will be a sea of change for Intel when introduced next year. Such a big change and Intel’s well-known stumbles in the past is likely why the company decided it needed a contingency plan should Meteor Lake be delayed.

Raptor Lake itself will be largely compatible with existing 12th gen Alder Lake 600-series of motherboard infrastructure, but will also usher in a higher-end and likely tuned for the chips performance 700-series of motherboards. Tom’s Hardware recently outlined MSI documents for an upcoming Z790 board leaked with DDR4 support.

Raptor Lake is scheduled to launch by the end of this year while AMD’s official on date sale for Ryzen 7000 is September 27.