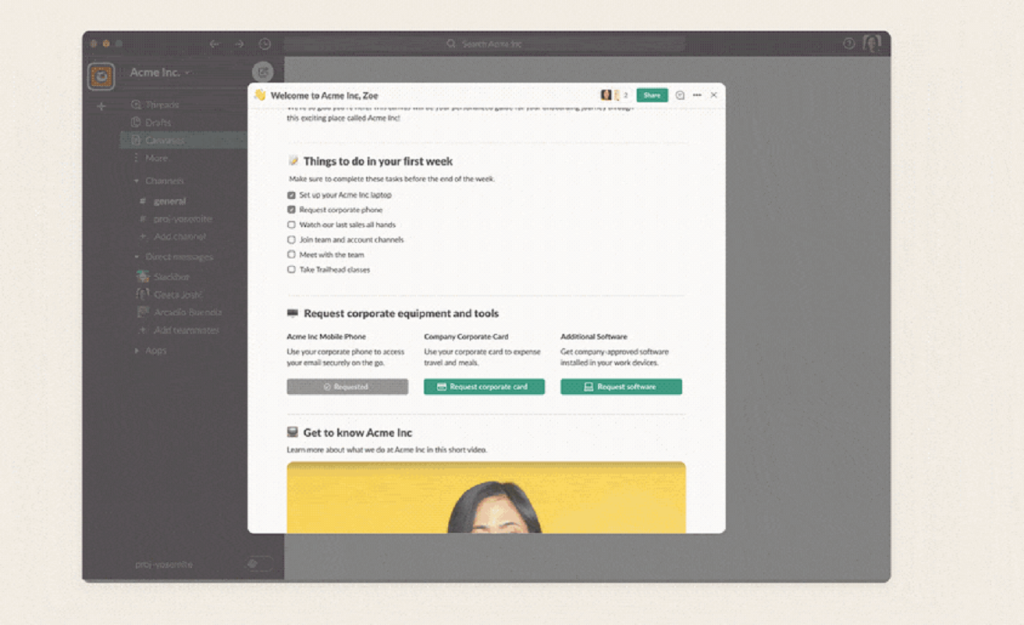 Slack’s evolution as a messaging and collaboration app moves further ahead with the introduction of the “Slack Canvas,” which provides a more unified focal point for small teams.

One key weakness within Slack is the lack of persistent references: you can “pin” a particular message to save it, but any collection of shared knowledge can easily got lost in the ebb and flow of a conversation. It’s often easier to reference an external document or Web site rather than use Slack itself, which is an advantage rival Microsoft Teams enjoys.

Slack’s trying to eliminate that with the new Slack Canvas, which is probably best thought of as a shared document that can be used to store those resources, especially for small teams. While the Canvas could be used to help new employees settle in, one example the company presented was gathering business intelligence around a potential sale: collecting company information, contact information about the client representative, relevant Slack channels, integrations, buttons to quickly automate business processes, videos, and so on. You’ll probably find that Slack’s Canvas crosses over with functions CRM software uses, but without the heavy messaging focus that Slack promotes.

A new Slack Canvas will be created from what is currently the “New Message” icon in the upper left-hand corner, next to your organization’s name. But you won’t be able to try it out until next year, when it launches, Slack said.

And that’s sort of the idea. Slack already offers “huddles,” or ways for a Slack channel of workers to quickly hold an ad hoc audio or video call. Now, pre-recorded video, saved conversations threads and multi-person screen sharing will begin rolling out today, the company said, and will be available in the coming weeks. Again, the idea is that Slack can offer small teams of people what they need to formally (or informally) get the job done.

If the Canvas doesn’t quite do what a team need it to do, Slack is also offering what it calls its new “platform,” available in open beta. Slack’s platform appears to need developer support, with a command-line interface and new SDK, but the goal is to allow developers to build new workflows that can be triggered with embedded buttons and other simplified processes. In 2023, developers will be able to embed workflows directly in a Canvas, Slack said.

Slack understands the fundamental problem — some of the documentation supporting Canvas notes studies that a typical employee can spend hours per work simply looking for the relevant piece of information (was it in email? Chat? A shared document?) rather than acting upon it. Canvas is hoping that by providing a center of gravity to collect these types of information, business workers will spend less time hunting elsewhere… and more time using Slack.

It’s still not clear, however, whether Slack’s own search functions will unearth that relevant bit of information within Slack, or within the Canvases that the company hopes that they will implement. Time will tell, therefore, whether Slack has solved the problem or simply made it worse.