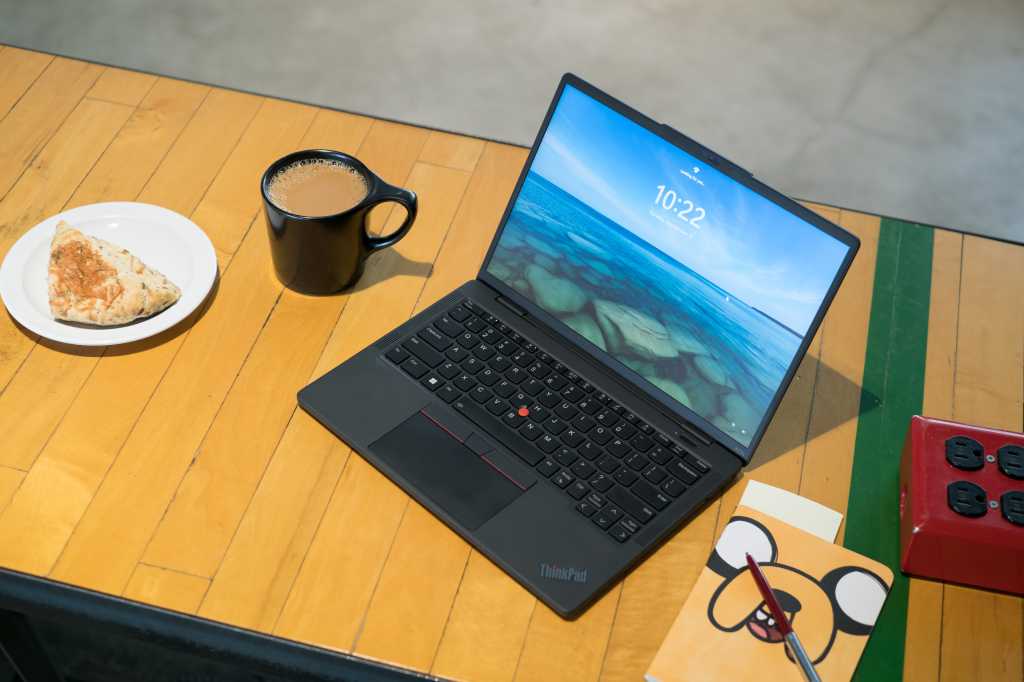 The Lenovo ThinkPad X13s may very well be an IT pro’s dream machine, but when it comes to regular consumer laptops, it’s got some seriously stiff competition.

The story of Windows on ARM is a long one at this point, with a lot of chapters worth skipping. Whether it’s the first Windows RT devices a decade ago, some barely-supported Windows 10-based Snapdragon 835 PCs in 2017, or sultry attempts from this decade like the Samsung Galaxy Book S and Surface Pro X, Microsoft has been trying to make fetch happen again and again and again.

So, it’s 2022, and it’s time for another look at how Windows 11 Pro is working on the latest Qualcomm laptop chip. This time, the new Snapdragon 8cx Gen 3 is inside a compelling little business notebook from Lenovo, called the ThinkPad X13s Gen 1. This premium ultracompact has a high price, but for what you pay, the kitchen sink is rightly included. You can get tons of storage, two biometric login options, 5G internet, a nice matte touchscreen, and more.

Our review unit, which is currently selling for $1,301.40, arrived with the following specs:

Simply put, the ThinkPad X13s Gen 1 is…a ThinkPad. In a weird way, the design of the X13s Gen 1 reminds me of one of my favorite ThinkPads, the X270. While that machine had way more features, it was a compact, slab-like ultrabook that contrasted with the wedge shape that other machines favor.

Like the X270 before it, the X13s is unashamed to be a bit boxy, with gently rounded corners and ever-so-slightly softened edges on the bottom. I never found it was sharp or uncomfortable to hold or use, and its thickness of 13.4mm is consistent basically from corner to corner. The texture of the case is just matte enough to lend extra grippiness, without being overly rubbery or tacky. I didn’t find it picked up fingerprints too readily, at least they were far less visible than the smears I left on the matte touchscreen, keycaps, and trackpad.

If there’s one thing I can say about the overall feel of the X13s it’s that it’s both slim yet solid-feeling. There’s very little flex no matter how you hold or use it, and I get the impression that it can take a beating. Lenovo brags about this machine’s recycled magnesium chassis and I bet that has something to do with the ThinkPad X13s’s rigid feel.

As this is an ultraportable machine, you’d best adjust your expectations when it comes to I/O. Furthermore, because this is based on a Qualcomm chip instead of one from Intel, you can forget the all-in-one versatility of Thunderbolt since that’s only been available on X86 machines. All of this said, the inclusion of 2 USB-C ports that run at 3.2 Gen 2 speeds is awesome. These ports enable data transfer speeds of up to 10 GBps and can easily hook up to your typical USB-C dongles for extra ports, pass-through charging, display output, and ethernet.

On the opposite side is a SIM tray, a laptop locking slot, and a headset jack. That’s all you get! Where this laptop makes up for physical connectivity, you’ll gain in wireless. Not just satisfied with putting in speedy Wi-Fi 6E, Bluetooth 5.1, and optional X55 5G WWAN cellular internet.

The cellular data worked pretty well on the whole, but at least where I live in Seattle, there’s very little mmwave AT&T 5G available, save for a patch near the sports stadiums downtown. Furthermore, mmwave doesn’t work indoors since it’s unable to penetrate many modern kinds of buildings. I’d say that unless you’re a mobile professional who works far away from Wi-Fi, you can save a bit of money by not opting for the WWAN option box ticked.

Low-profile laptop keyboards get a lot of flak, but they’re hard to do right. Thankfully, the switches here in the X13s Gen 1 feel great to use. They might not be to the liking of the die-hard ThinkPad fans out there, but in a device this thin this is a keyboard that doesn’t feel like a punishment. In fact, it’s one I’ve come to really enjoy using while writing this review. Lenovo’s packed in the usual assortment of handy shortcut keys for muting the microphones and disabling the webcam. I tend to rely on the arrow keys quite a bit, and Lenovo has made a little extra room to let these buttons breathe. They’re not constrained by the spacebar row, instead jutting out slightly to accommodate for larger keycaps. Like other ThinkPads, the keyboard backlight is all business, with two levels of brightness.

Since this is a full-blooded ThinkPad, you’ll find the familiar and famous (infamous?) TrackPoint in the middle of the keyboard. It works quite well for precision mousing, and the left/scroll/right click buttons below are super clicky–there’s no doubt when a button is clicked. If you’ve come to depend on the accuracy of a TrackPoint, you won’t be disappointed.

The trackpad is also pretty good. Despite its smaller footprint, there’s a plenty-big trackpad beneath the TrackPoint’s mouse buttons. It doesn’t quite feel like the smoothest glass but I’d say it’s smooth enough for accurately executing gestures and adequately sensitive for everyday use. Overall, I appreciate that you have the option of how you’d like to steer the mouse around, and I found myself using each for different tasks.

You might think a business-focused notebook like this would have a ho-hum display, but I was really surprised by the ThinkPad X13s. Not only is it a taller 16:10 aspect, but it’s a comfortable resolution (1920×1200), comes with a glare-cutting matte finish, and optional touch input as well. At 300 nits, it’s bright enough for daily usage, even if it might not be bright enough to use in direct sunlight. While I wouldn’t do color-sensitive work on this computer, to my eye, the display is vivid, constrast-y, and overall nice to use.

While Apple’s MacBooks and recent Dell XPS’ surprise with their booming speakers, you shouldn’t expect incredible sound from the X13s. This laptop can get impressively loud, but unfortunately the depth of the sound is lacking, especially on the low-end. The system has Dolby branding, which comes through in the stereo separation of sounds, which stood out when watching the trailer for Star Trek: Picard season 3 on YouTube.

Part of Qualcomm’s processor package includes some special image processing, which is put to good use. The webcam in the X13s is rather good, given its own little hump up atop the display. It’s a 5MP unit, which enables the Snapdragon 8mx processor to automatically punch in and track your face dynamically. I was skeptical this would work without diminishing image quality but surprisingly it works well. Overall, this webcam performed way better than others I’ve used recently. It’s sharp, renders colors well, and lacks a lot of the fuzziness that lower-res or over-processed cams seen elsewhere.

The microphones and sound processing provided by the Qualcomm chip are quite good. If you work in a noisy environment, you’ll be able to depend the 3-mic system to capture your voice and not whatever’s going on in the office or café. In an informal test, the mic array completely cancelled out the clacks of a loud mechanical keyboard in the background, isolating only my voice.

Windows on ARM has always sounded better on paper than it’s worked in the real world. But chip improvements and the inclusion of 64-bit app emulation have moved the needle quite a bit this year. In Windows 11 Pro, many apps will probably work, whereas in the past only 32-bit apps were fair game and, even then, performance wasn’t great.

But, unfortunately, a lot of tools we use as our performance benchmarks still aren’t compatible with Windows 11 on ARM. When I tried to install PCMark 10 and run those benchmarks? Well, they ran, but didn’t complete or yield a score. Other test suites didn’t install at all. So, here we are again, with a platform that is maybe better than ever yet not as good as it could or should be. Day-to-day performance mostly felt good to me, but it is too bad that app compatibility remains a barrier to getting work done on Snapdragon.

So, PCMark 10 didn’t work on the X13s, despite a bunch of software and firmware updates. We were, however, able to run the older PCMark 8 Creative benchmark, which will at least let us see the improvements made over older Windows on ARM devices in multimedia tasks.

To give a sense of the Snapdragon 8cx Gen 3’s performance vs a newer, 12th gen Intel laptop, I also ran this benchmark on a brand new Acer with a mobile-focused Intel Core i7-1255u chip inside. Unfortunately, although Qualcomm has started to close the gap, the Core i7 still runs away with the lead.

Qualcomm’s been touting some GPU performance improvements in the Snapdragon 8cx Gen 3 and we can see how far they’ve come with the cross-platform 3DMark Night Raid benchmark. Compared to older ARM systems, this chip absolutely leaves the Qualcomm-designed SQ1 from 2019 in the dust, almost doubling its performance. That said, as much as Qualcomm’s improved over the years, Intel’s not standing still and its Iris Xe graphics score higher yet.

Web rendering speed is important, and that’s why we’ve put past ARM laptops through this test. Microsoft has spent a lot of resources getting its Edge browser competitive and we can see that the work on the ARM version has paid off thanks to the faster Snapdragon chip.

For the sake of comparison, I ran this test in Microsoft Edge on an Apple M1 Mac Mini with similar specs. While the ThinkPad is fanless, both chips have 16GB RAM at their disposal and an eight core design. In either test, the new Snapdragon 8cx Gen 3 is trounced by the 2-year-old Apple M1 no matter how you cut it. It’s also handily embarrassed by the mid-range 12th gen Intel Core i7 in the Acer Aspire.

If there’s been any saving grace for the whole Windows on ARM project, it’s battery life. Although past machines like Microsoft’s Surface Pro X disappointed, others had an obvious edge. The ThinkPad X13s Gen 1, with its 49.5Wh battery, finally delivers impressive performance in normal tasks and, depending on how you work, may even leave you with time to spare.

In our standard 4k video rundown test, the X13s racked up a score of 773 minutes–almost 13 hours continuously looping a high-res video file. This is a fantastic showing for team Snapdragon.

While the ThinkPad X13s Gen 1 still could use some software improvements, this is the best Windows on ARM has ever been. That might be damning this Lenovo with faint praise, but a decade on this finally gets us closer than ever to Real Windows Laptop performance in a tiny, power-sipping, modern package. It helps enormously that the design and product engineering are worthy of the ThinkPad name, making it a nice device to use and carry.

For IT pros, if there’s a road warrior in your C-suite, this diminutive ThinkPad might be exactly what they’ve been dreaming of while snoozing in business class. Taken on its own, there isn’t another business machine that can offer what the X13s can–just make sure all your mission-critical software runs on it before issuing it to the team.

For individuals, this machine makes a lot less sense. There are people out there who would love a long-lasting machine that’s thin and has 5G integrated, but the competition is pretty stiff. Right now, there are a ton of powerful Intel and AMD-based machines that are competitive, stylish, and with good enough battery life. Unfortunately, the ThinkPad X13s falls a little behind the competition.

Brendan Nystedt is a freelance writer and editor who loves computer hardware. He writes laptop reviews for PCWorld, and his work also appears on Wirecutter, Reviewed, and WIRED.