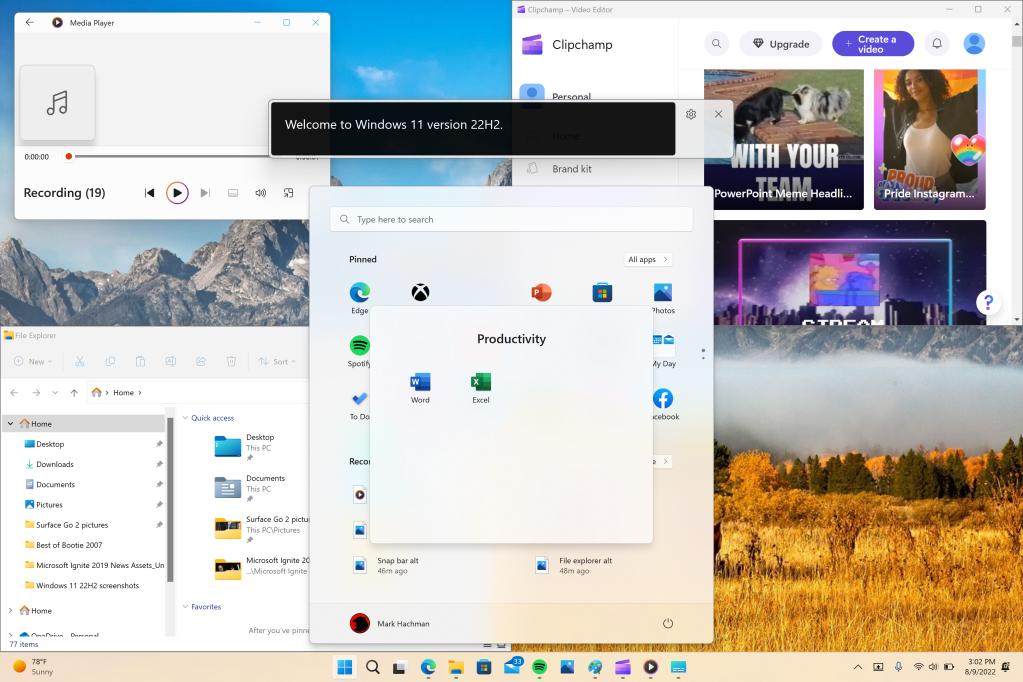 Microsoft’s use of “Windows 11 2022 Update” tips off one key change. Instead of feature releases in both the spring and fall, Microsoft plans just one major Windows 11 feature release per year going forward. Any feature that misses this window will be added in what Microsoft calls “controlled feature rollouts,” with minor Windows 11 updates pretty much whenever Microsoft feels like it.

The first feature rollout is due in October via an “optional non-security preview,” and is expected to add a tabbed File Explorer that has gone missing in the Windows 11 2022 Update. Otherwise, the new feature will be more broadly rolled out in November, Microsoft says.

Microsoft, however, has made previews available of 22H2 for months now, including the Release Preview we’ve used that as the basis of our review of the Windows 11 2022 Update (22H2). The Windows 11 2022 Update (22H2) is a middling release that adds new features — just not ones that users really hoped to see. While our review adds more detail, the key changes the update adds include new folders in the Start menu, a reworking of the File Explorer UI, a Snap Bar, and key improvements in accessibility features, including AI-generated Live Captions for video stored on your PC. But a performance-stealing security feature is also now on by default, in the name of security.

Microsoft is also making a big update to the Windows 11 2022 Update in terms of apps. No, not Microsoft apps — Android apps. Windows 11 only supported a relative handful of apps at launch, and now there are far, far more: 20,000 apps, all courtesy of Amazon.

Our review, however, notes a couple of gaps. For one, File Explorer should offer a tabbed interface, based on earlier preview releases. Likewise, Voice Access, which allows you to control your PC by just your voice, appears to be present but not functional. Microsoft confirmed, however, that Microsoft will add the tabbed File Explorer interface in its first “controlled feature rollout” (previously referred to as a “Moment”) in October.

Microsoft began publicly talking about Smart App Control in April, as a complement to the User Access Controls already within Windows. Essentially, SAC is like Windows Defender’s SmartScreen app, but for Windows: if you download a known app, nothing will happen. But if you download a shady app, or script, and Microsoft doesn’t really trust it, Windows will either ask for permission to run it or block it entirely.

The catch (or benefit, depending on your perspective) is that Smart App Control will only be baked in on new PCs with a new build of the Windows 11 2022 Update installed. If you already own a PC and will be upgrading to 22H2, you’ll need to first upgrade, then reset your PC. That will create a baseline for Smart App Control to go forward.

Likewise, if you wish to turn off SAC after it’s installed, you can do so via the Windows 11 Settings menu. But doing so will also require you to reset your PC once again, Microsoft executives said.

Smart App Control looks like it will be handy for providing a safety net for those who need it — but may be an annoyance for those who wish to install custom scripts, utilities, and the like.

Microsoft is making the free Windows 11 2022 Update available to both Windows 10 and Windows 11, with no end date to upgrade.

Windows 11 2022 Update will be a “traditional” update that you’ll need to agree to and download, via Windows Update. If you’re eager to get it, simply go to the Windows Settings menu, then to Windows Update, and select “Check for Updates.” Alternatively, you can simply leave your PC on and connected to the Internet. Microsoft’s telemetry should already understand the capabilities of your PC, and push the update to it if it meets the specifications.

“The measured and phased rollout will offer the update via Windows Update when data shows that your device is ready, as our objective is to provide a quality update experience,” Microsoft said in a blog post. “We will initially ramp up the offering availability in the first weeks as we monitor quality signals.”

The Windows 11 hardware requirements have not changed, executives said. But for those who want to bypass the requirements and install Windows 11 on an unsupported PC, Microsoft will turn a blind eye.

“It’s flattering for us to see that we have a lot of real fans out there that are willing to take these extra steps,” said John Cable, vice president of program management for Microsoft’s Windows Servicing and Delivery, in a briefing with reporters. “You know, we’re not officially supporting that. And we’ve been pretty clear on that position. So it’s definitely not something that we would encourage. But at this point, we’re not taking active steps to prevent it.”

Can you delay the Windows 11 2022 Update (22H2)? Almost certainly. Currently, you have the option of delaying any and all updates for up to five weeks, a standard feature that can be accessed via the Windows 11 Settings menu (Settings>Windows Update, then click the dropdown menu next to “Pause updates.”) Business users and those with Windows 11 Pro can delay new feature updates for up to a year via a group policy setting. Presumably you’ll have similar options once the additional “controlled feature rollouts” begin shipping, too.

To check that you’ve received the new Windows 11 2022 Update, open the Windows Search box and type winver. While Microsoft isn’t identifying the final build number, you will see some text identifying the new build as “22H2.”