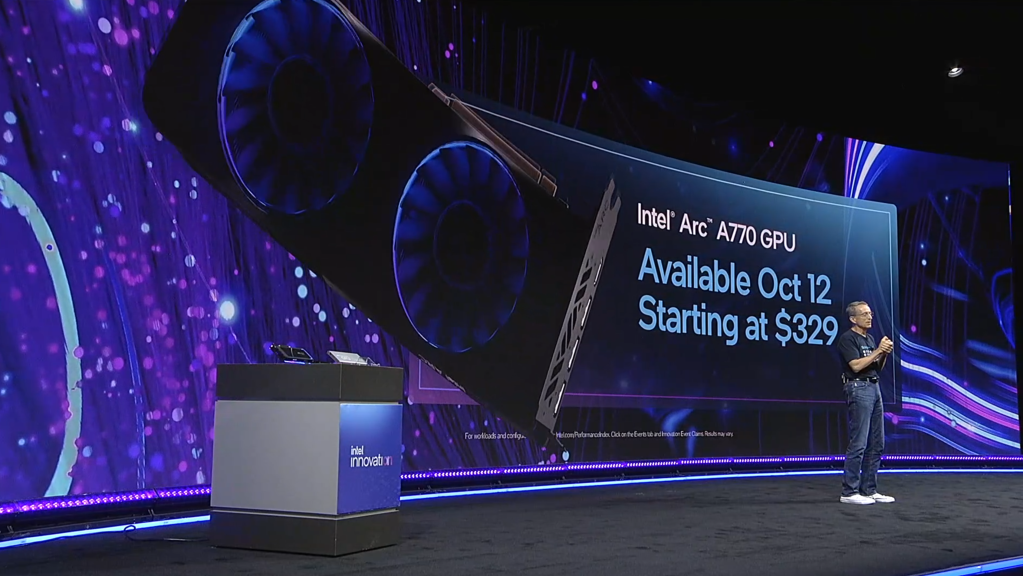 It feels like Intel has been hyping up the debut of its discrete Arc graphics cards forever, but so far all we’ve been able to grab at retail is the low end of the series. That’ll change very shortly. At the company’s Innovation conference, the flagship GPU has finally been given an official price and date: $329, and October 12th.

The top-of-the-line card will come in 8GB and 16GB varieties (presumably the price indicates the 8GB version), both marked as the “Limited Edition” first-party variant. Intel CEO Pat Gelisnger specifically highlighted the card’s affordable nature: though this is the most powerful version of Intel’s debut Alchemist GPU, it’ll be competing on the lower part of the mid-range compared to offerings from Nvidia and AMD. From what we’ve seen so far, the Arc A770 will compete with the GeForce RTX 3060 and Radeon RX 6600 XT, both of which have a retail price of around $350 to $400 in today’s market.

Without offering much in the way of pure benchmarking comparisons, Intel’s presentation mentioned that the Arc A770 has “65% better peak performance, versus competition in ray tracing.” Specifically which card that competition represents, and in what game or benchmark the test was performed, was not mentioned, though in the past Intel has compared the Arc A770’s ray tracing performance against Nvidia’s RTX 3060. Intel confirmed that the Arc A770 is being sent to reviewers before the retail launch, so expect the usual detailed analysis. Intel has previously indicated that it will be aggressive on pricing, positioning its cards based on how games perform in its third tier of testing instead of ideal scenarios.

The Arc A770 features 32 6nm Xe graphics cores running at 2100Mhz, with either 8GB or 16GB of GDDR6 video memory and a 256-bit memory bus. With the ultra-low-end covered and the mid-range being introduced, Intel still has yet to say when the Arc A750 will be introduced. With Nvidia’s ultra-expensive RTX 40-series already announced, and AMD poised to reveal new high-end GPUs in November, trying to claim a position as an affordable alternative could be a very smart move.