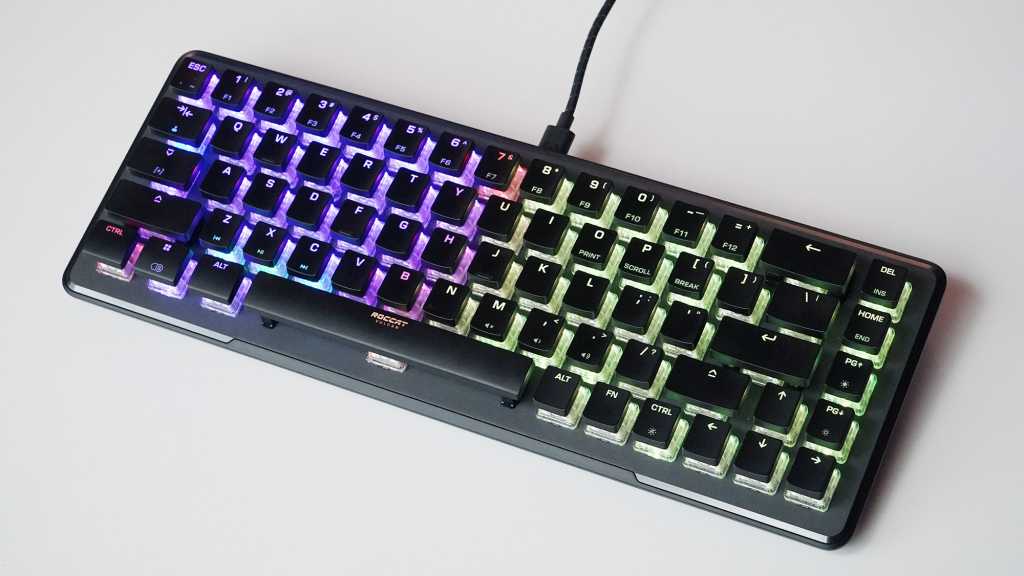 How important is it to you that your keyboard be shiny? I mean really, really shiny, like, used as a backup desk lamp, or a warning light for rocky seashores, or a navigation aid for holiday-themed flying sleds? If you want a keyboard so unbelievably bright that it might just outshine your monitor, the Vulcan II Mini is the one for you.

Not only does this keyboard feature two LED lights underneath every transparent key switch, for a smooth and super-bright lighting effect. Not only does it have keycaps that chop off most of the bottom portion, all the better to see those twinkly lights. No, this keyboard is literally powered by light, or at least its operating mechanism is: Every one of its 67 keys uses a super-fast optical switch.

Frankly, all the lighting tricks in the world wouldn’t make a keyboard worth $150, even with fancy switch tech. It’s a terrible value…but it’s not so far removed from the competition that it’s beyond the pale. So the Vulcan II Mini gets enough right, and makes few enough mistakes, that it’s worth considering if you care more about the bling than the bucks.

If you must have the most dazzling keyboard around, the Vulcan II Mini is it. But those looking for extra customization or software features should look elsewhere.

The colors, Duke! The colors!

The Vulcan II Mini is a 65% wired gaming keyboard, with linear “red” optical switches, a mostly plastic build, and a smart, compact layout. But we’ll get to all of that in a minute. If you’re reading this review after casually spotting the keyboard’s marketing blurbs, you want to know about them lights. Well here they are.

The keyboard uses several tricks to make it the absolutely brightest and most blinged-out board in the neighborhood. Perhaps most obvious is its custom keycaps. The “floating” backlit caps literally chop off most of the plastic sidewalls you see on similar mechanical keyboard designs. To Roccat’s credit, this doesn’t appear to affect their stability or tactile feel at all, an impressive feat. On the downside, they’re rather cheap ABS plastic with a slippery finish, which really isn’t acceptable on a keyboard this pricey.

Next, the switches themselves are completely transparent: The only opaque element is their red stems. This is something we’ve seen on a few similar designs. Lastly and most importantly, each switch sits on top of two—count ’em, TWO!—LEDs, top and bottom. Not only does this mean double the brightness of most mechanical keyboards (even before the transparent switches and fancy keycaps), it means that the lighting animation you can set up in the software is twice as fluid. Transitions from one color to the other, or reactive bits of twinkling underneath your fingers, are doubly smooth.

Does this help you in any kind of practical way? Absolutely not! But it sure is pretty. All these design decisions come with essentially zero drawbacks, too, so even though I’m not a fan of RGB I’m inclined to forgive them. The only issue I ran into was a tendency for the lip of the spacebar to get caught on my thumb, forcing me to push it back down occasionally. The Vulcan II Mini uses a semi-standard layout (only the right Shift key is a non-standard size, and even that’s easy enough to find these days), so you’re welcome to add your own keycaps if you must.

Slick software that doesn’t do enough

Of course, for the true RGB connoisseur, the lights themselves are only half of the equation. You need a driver package that can customize them to your heart’s content. The Swarm system includes the usual per-key programming and a handful of pre-built animations, with access to per-game profiles to boot.

But it also includes compatibility with the older Alienware AlienFX system, if you happen to have a mouse or monitor from Dell’s gaming sub-brand to pair it with. But wait, as the salesman says, that’s not all. Swarm can also sync keyboard lights with the colors that appear on your screen, creating a dazzling, reactive light show that actually changes based on your game. It calls this tool TalkFX.

There’s just one problem. Neither AlienFX nor TalkFX are actually compatible with the Vulcan II Mini, despite being heavily featured in the latest build of the Roccat Swarm software. In fact, looking at the list of compatible keyboards, it appears none of the boards currently sold by Roccat are compatible with either of them. That leaves the Vulcan II Mini with a nice but rather stale collection of animations and lighting tricks, and bereft of the more recent custom game lighting profiles and smart home sync seen in some of the competition.

It also means I wasted two paragraphs of my review describing features this keyboard doesn’t have. Oops. Normally only basic lighting options isn’t enough to sway me when judging a keyboard, but one so finely focused on the light show should have offered more user choices.

I’m rather picky when it comes to my keyboards, and the ultra-light, ultra-fast switches favored by gamers usually don’t agree with me. Which is why I was surprised to find that the linear switches on the Vulcan II Mini are actually really good! They’re stiffer and springier than usual, which helps make up for the fact that you can’t switch them out for alternative Cherry MX-based designs.

But the reason you can’t swap out the switches is that they’re Roccat’s semi-proprietary Titan II Optical design. (I’m betting these are borrowed from Gateron, but I can’t prove it.) Red is the only choice, though Roccat makes them in a tactile Brown for some other recent keyboards.

That’s okay: These 45-gram keys are surprisingly smooth and satisfying, allowing me to instantly acclimate myself even with the slick keycaps. They seem to have achieved hall effect smoothness (see Kailh’s BOX series for an example) with only a standard cross stem. The 1000Hz polling rate is not adjustable, but with a wired design, there’s no reason for it to be. The board is capable of 100% key rollover, for you APM-counting strategy game fans out there.

The layout is the usual 65%—that is to say, a teeny-tiny body that adds an extra column of keys on the right in order to better accommodate a full arrow cluster. That takes care of most of the learning curve, along with a dedicated Delete key in just the right spot.

The software doesn’t allow you to move the Fn key, which is one of my pet peeves, but it matters a lot less here than on a more restrictive 60% layout. All the rest of the keys are available for reprogramming, macros, and five different program or game auto-profiles, with an option to store some on the keyboard’s memory itself. Swarm is less than intuitive, going for a grey-on-black “gamer” look that’s hard on my eyes, but it’s easy enough to figure out if you’re used to these flashy driver packages.

The Vulcan II Mini is shockingly light at just 17.6 ounces, light enough to forget that you’re carrying it in a backpack. While it’s not the absolute lightest board on the market, it’s so easy to move around that you’re unlikely to split hairs. Despite the light weight it still manages to use an aluminum primary deck and include double-stage keyboard feet for comfort, a nice touch.

I’m less thrilled about the center-mounted USB-C port. While it’s always nice to have a detachable option, there’s no way to route the cable to the right or left, and its deeply recessed cavity means that some USB-C cables won’t fit. Don’t lose the one in the box.

I would have liked to have seen a wrist rest option, especially considering the Aurora Borealis-style rest included with the full-sized Vulcan II Max design. Again, that’s an unfortunate omission at the price, but I suppose it’s one less thing to lose on your trip to the LAN party.

The Vulcan II Mini is a comfortable and super-portable compact gaming keyboard, with a smart layout and bearable, if not enjoyable, software. The eye-popping light show of its double LED setup, complete with purpose-built keycaps and optical switches, would have been a lot more impressive if it could tie in with the Wi-Fi-connected lamps in my office.

At $150, you’re paying a lot for those lights that only sync with other Roccat hardware. Razer’s similar optical-powered Huntsman Mini is $20 cheaper, albeit without the much more usable 65% layout, and Corsair’s K65 RGB Mini is $40 cheaper, ditto. Similar offers from Glorious and Keychron offer better programming and customization for less.

So the Vulcan II Mini, despite some high points in build and design, is hard to recommend in pure function at its price point. But if you’re willing to pay extra for those admittedly pretty lights, and don’t mind the lack of flexibility in how you show them off, it might just be worth the splurge.