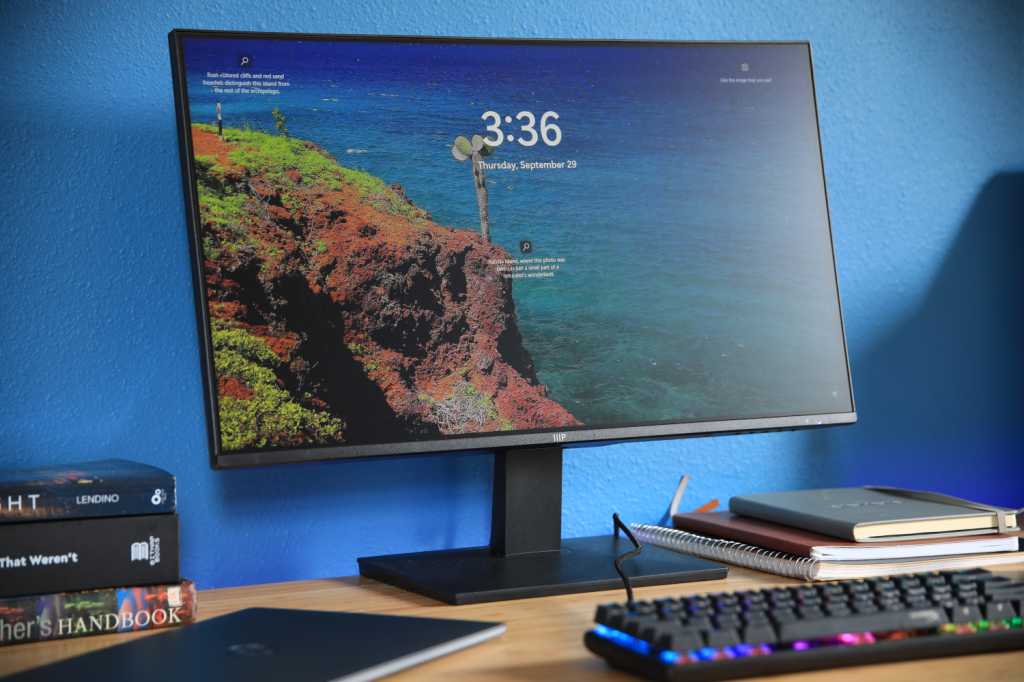 The Monoprice 24-inch CrystalPro delivers attractive color on a budget, but it’s not flawless. However, despite the concessions made to keep this at such a low price, it provides good value for the money. You won’t find many 1080p displays for less, but it still might be worth holding off until it’s on sale.

Monitors sold below $150 make sacrifices to achieve their tantalizing price point. The new Monoprice 24-inch CrystalPro is no exception, but its solid color performance puts it a step ahead of some alternatives.

Note: This review is part of our ongoing roundup of the best monitors. Go there for more information about competing products, what to look for in a monitor, and buying recommendations.

The Monoprice 24-inch CrystalPro 44029 has rudimentary specifications. It delivers 1080p resolution and has an IPS display panel. Refresh rate is increased to 75Hz from 60Hz, but Adaptive Sync support is not advertised. The monitor also lacks DisplayPort.

The Monoprice 24-inch CrystalPro monitor goes for a slim-bezel look with small bezels along the top and sides, plus a larger (but still small) chin. It’s a modern, minimalist look that should work on any desk.

Build quality is meager but avoids any notable pitfalls. The panel’s plastics are thin and a bit creaky but don’t allow any unusual flex or warping when handled. It feels as good as many monitors in the $200 to $400 price bracket.

Monoprice sticks to a simple, clip-in stand that only adjusts for tilt and doesn’t raise the monitor far off a desk. This is a problem for tall owners, as the monitor will sit too low, and there’s no built-in height adjustment. I placed the monitor on a stack of hardcover books.

A 100x100m VESA mount is available for use with third-party monitor arms and stands, though, strangely, it only has two of the four mount locations normally provided. This isn’t ideal but workable given the monitor’s small size and minimal weight.

The Monoprice 24-inch CrystalPro’s connectivity includes just two ports: one HDMI 1.4 and VGA. It’s an odd selection for a modern monitor, as this means there’s a single input usable with most modern computers. The 24-inch CrystalPro isn’t a good choice if you want to connect both a PC and another device, like a game console or streaming stick.

A set of buttons on the monitor’s right chin provide adjustments. They’re less intuitive than a joystick control but offer a nice tactile feel that makes them easy to use in a dim or dark room.

Monoprice’s menu system strikes again with confusing and poorly optimized controls. The direction in which the buttons took me through menus was often not what I expected, and some features (like brightness) took a few too many steps. Monoprice clearly doesn’t consider the menu system a priority, but a few basic improvements to the layout would go a long way.

Despite this, a fair range of image-quality options are available. There’s brightness and contrast, of course, plus a good array of preset modes, a few color temperature presets, and three-way RGB color adjustment. The monitor also offers a few gaming features like a black equalizer for boosting dark areas of games. These options, though basic, are acceptable for the price.

The Monoprice 24-inch CrystalPro’s specifications look rather basic. It has a 23.8-inch, 1080p, IPS panel with a refresh rate of 75Hz. Aside from the slight bump in refresh rate, this is as simple as a modern 24-inch monitor can be. Yet the monitor does have its strengths.

Brightness comes in at a maximum of 261 nits. This is not a high level of brightness but also not too dim, and it will be usable in most situations. I only found brightness unimpressive when I threw open all my windows on a sunny summer day—and it was passable, even then.

Still, if you want bright, look elsewhere. There’s plenty of alternatives that provide a higher level of brightness and some, like the Monoprice Dark Matter 24-inch, are only a hair more expensive.

Contrast ratio comes in a moderate 890:1. This is not an excellent level of contrast for a modern IPS monitor, but also not bad, and about what I expect for the price.

The CrystalPro 24-inch offers a decent sense of depth and dimensionality when used in a dark room. When used in a dark room, however, the monitor’s elevated black levels and hazy “IPS glow” takes away from the experience. Shadow detail is lacking and areas that should appear dark instead look gray.

Color gamut lands at 98 percent of sRGB and only 76 of DCI-P3. This is way off the broader color gamut that’s available in a mid-range monitor but, once again, fine for an extremely expensive monitor.

The limited color gamut will lead to more noticeable color banding and accuracy issues for photo and video editors, but this isn’t the monitor’s intended use.

The CrystalPro 24-inch jumps ahead in color accuracy, providing much better accuracy than the monitor’s competitive set. It’s remarkable, really, to see a monitor in this price range do so well. High accuracy makes the most of the monitor’s limited color gamut. Scenes look realistic and convincing.

This is most notable when viewing video or photos, but also nice for general use, as budget monitors have a tendency to struggle with certain common shades (such as the bright, vivid reds many brands, including PCWorld, use on their webpages).

With that said, the monitor’s budget focus comes across in gamma and color temperature. The gamma curve of 2.3 is a bit off the target of 2.2, so content tends to look darker than it should. Default color temperature came in at 7400K, which is noticeably cooler than the target of 6500K. The image can look a bit sterile and unwelcoming. Finally, the monitor suffers some vignetting, which means the extreme edges are visibly a bit darker than the middle.

The monitor’s 1080p resolution is not sharp. Small fonts can look pixelated or become hard to read, video is often soft, and the games can show aliasing and shimmer along fine details. That said, the monitor’s sharpness is as good as can be expected for the resolution, as the monitor avoids subpixel and dot-pitch issues that can degrade clarity.

On the whole, the CrystalPro 24-inch performs well for its price. It’s not amazing, but it’s good enough that, if somehow forced to use it every day for the rest of my life, I’d be okay. That’s high praise for a display currently sold under $150.

The CrystalPro 24-inch has a 75Hz refresh rate but otherwise lacks anything that will appeal to gamers. This includes support for adaptive sync (including FreeSync and G-Sync).

Motion clarity isn’t great at default settings. Fast camera pans and fast-moving objects introduce major blur that will make details hard to pick out. If you’re playing DOTA 2, for example, the size and color of an enemy hero is discernible while scrolling, but the name and health bar prove impossible to read.

There’s two enhanced response times settings that do slightly improve matters, but only slightly. They also cause overshoot artifacts that are noticeable as bright rings, halos, or patterns behind high-contrast objects.

In short, it’s not a great monitor for fast-paced games. A monitor with a 144Hz refresh rate and adaptive sync will be more expensive, but it’s worth the premium if you can possibly afford it. 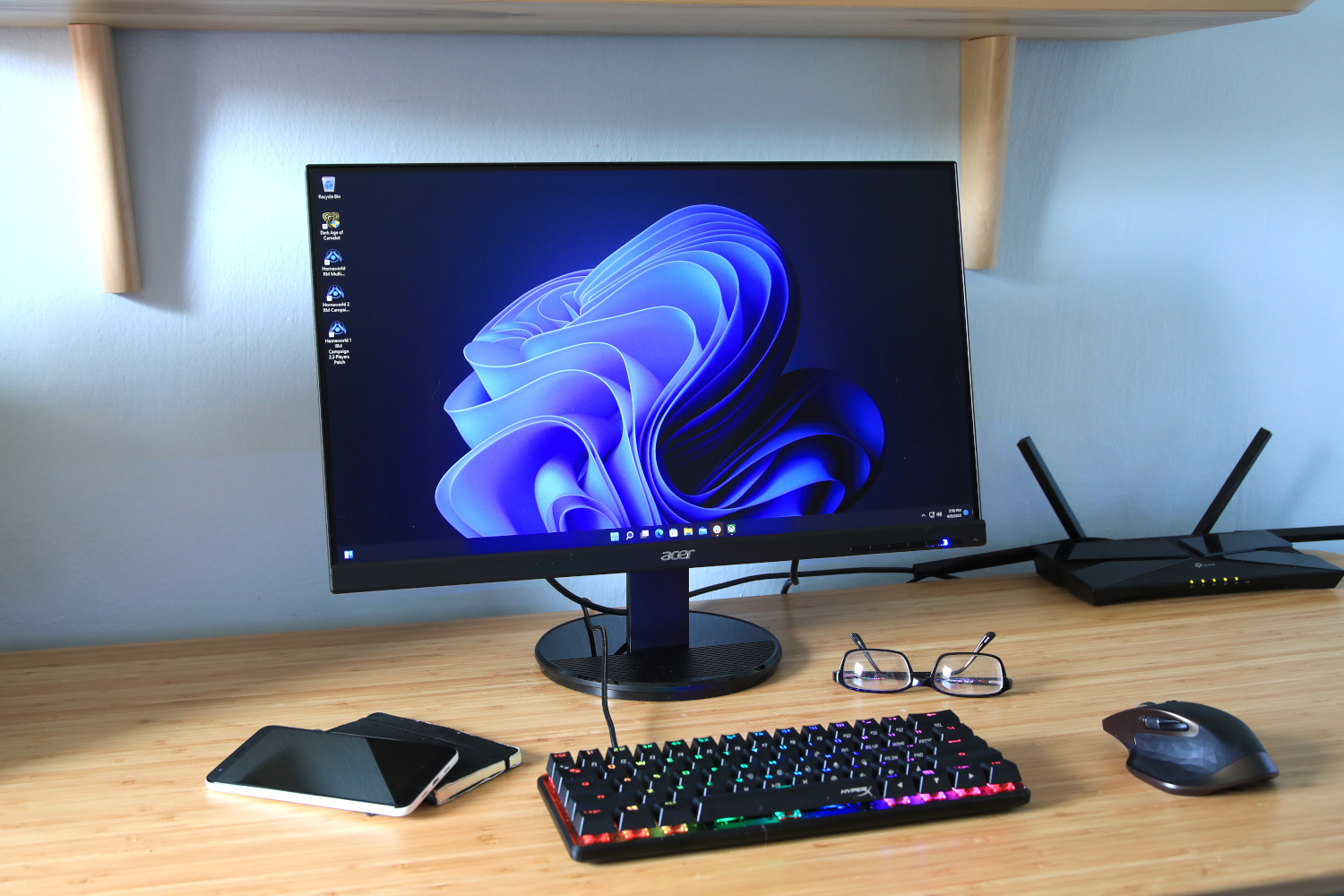 The Monoprice CrystalPro 24-inch 44029 is a good budget option if you want a no-frills monitor with acceptable image quality. Just be sure to check pricing, as budget monitors frequently go on sale: Our top budget monitor, Acer’s very similar K242HYL, is even less expensive.