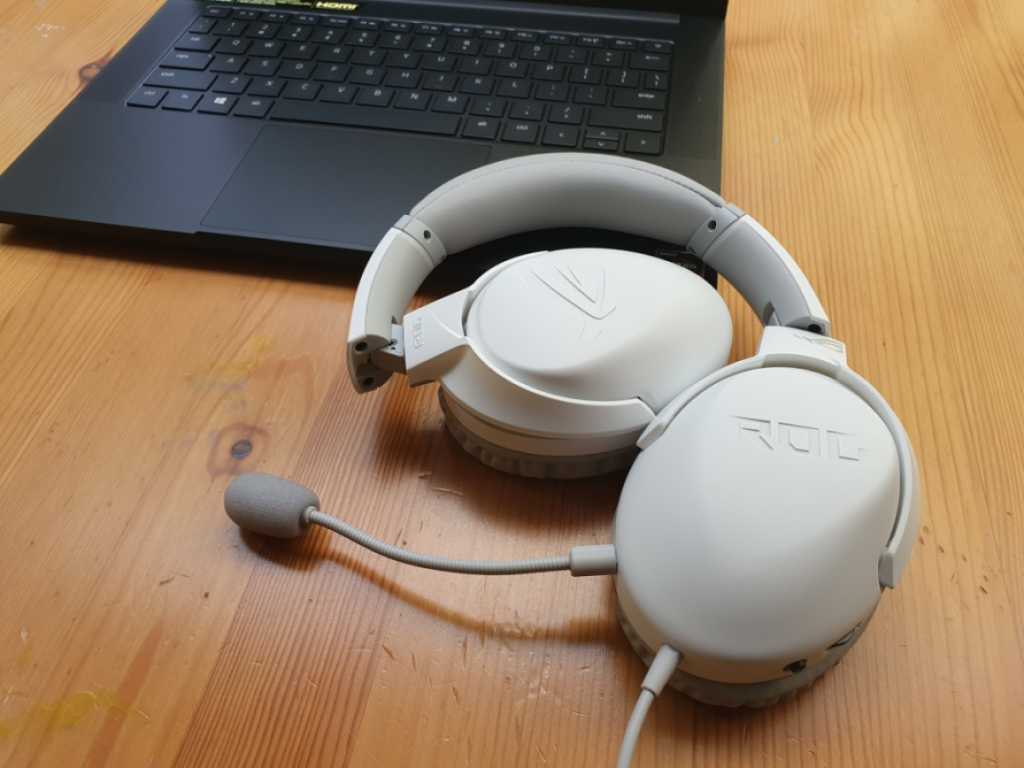 Dominic Bayley / IDG
At a glance

The Asus ROG Go Core Moonlight White is one of the most lightweight and portable gaming headsets you can find. It doesn’t have ANC or spatial audio, but delivers natural-sounding gaming audio all day long.

The Asus ROG Strix Go Core sits in a line-up that includes the ROG Strix Go, ROG Strix Go BT, and ROG Strix Go 2.4. These all differ slightly in functionality—mainly in regard to their connectivity—but they sport roughly the same design. Naturally, the advantage of this is you can pick out the one that fits your needs, without paying for all the unnecessary extras.

That said, the Go Core’s inexpensive $79.99 sticker price remains kind of misleading. Yes, it’s the simple 3.5mm option of the bunch and the cheapest, but it’s no less adapted for gamer life, sporting features you would expect to see in a more premium device. They include decent audio drivers, an extremely lightweight design, and folding earcups—factors that make it one of the most portable and affordable mid-range headsets you can find.

Note: This review is part of our ongoing roundup of the best gaming headsets. Go there for more information about competing products, what to look for in a gaming headset, and buying recommendations.

The benefit of the Go Core’s extremely lightweight design is obvious: Most gaming headsets contribute around 300 grams to the weight of a satchel or bag, but the Go Core lightens the load substantially, weighing just 252 grams (about the weight of 10 nickels)—hence the “Go” in the name, which is a nod to the headset’s excellent portability. Its lightness also ensures it’s barely noticeable on your head—to me it felt like it made just the faintest contact with my ears, and that feeling remained after hours of gaming, when I’d normally expect to feel some discomfort.

The earcups rotate a full 180 degrees and fold upwards to 90 degrees, allowing you to simply pack the headset up into a compact bundle and tuck it away in a bag without bits protruding and jutting into you—or worse, getting broken off by impact. It’s a small benefit but one that you’ll find incredibly useful once you find a case to fit it in—since the headset doesn’t ship with one.

Of course, the rotating cups also help in the comfort stakes too, giving you plenty of space to move your head. Yet another benefit is you can lay them flat on your chest—a simple convenience that let me cool down my head while I waited between games. Ah, to have a completely cool headset one day….

As for the rest of the Go Core’s design, it’s no less flattering. The earcups feel very plush, each one sporting a lightweight layer of memory foam that squishes down effortlessly, keeping your ears feeling pressure-free. And they are a decent size, so they fit well without sitting uncomfortably on top of your ears.

The covering material is a thick leatherette that feels very soft, but as I hinted at earlier, can get a little hot at times. They don’t get spicy-jalapeno hot, but just enough to need to take them off from time to time. This is an unfortunate but necessary consequence of how the headset is designed to block out ambient noise—it relies on the firm seal the material makes around your ears, since there’s no active noise-cancellation technology onboard.

Above the earcups there’s a flexible metal headband with plenty of bend. Although the headband’s segments aren’t numbered, it does click as you extend it, so it’s easy enough to remember your ideal length by listening to the number of clicks it makes. Up top, there’s more leatherette-covered cushioning, so you get comfort all over.

It’s encouraging to see that Asus hasn’t overlooked style as a component of its peripherals. My Moonlight White Go Core looked exceptionally fresh, its dual white and gray color scheme brightly contrasting with the ubiquitous black that has multiplied in my gaming den.

I also really liked the embossed ROG and Asus logos that adorned the sides of the cups, which provide a sense of familiarity with other Asus ROG products that I’ve enjoyed using recently.

While some gaming headsets pack in multiple connectivity options, my Go Core came with a simple 3.5mm headphone cable for a wired connection. Too simplistic? Limiting? Hardly. That still grants you access to just about any device you may have at home via a standard 3.5mm audio or combo port, although the downside is you’ll be tethered to that device while you’re using it.

I mainly plugged into my desktop and laptop PCs, but the Go Core will just as easily hook up to a Mac, smartphone, PlayStation 5, Xbox X/S, and Nintendo Switch—to name just a few.

Besides this, there’s another advantage to a 3.5mm headset: Making connectivity a simple wired affair means Asus can keep the cost down to just $79.99 USD. But if you can’t live without wireless connectivity, expect to pay $120 more for an Asus ROG Strix headset, since the nearest priced wireless version, the Asus ROG Strix Go 2.4, ships for $199.99.

On rare occasions I have received a headset with an ill-fitting 3.5mm cable, so it was worth scoping out how the Go Core’s fared in comparison. Thankfully, it was a precise fit that didn’t spin around or wobble in my ports. Consequently, there was no static that could cause distortion in sound quality. The cables were also thick and strong, so I was confident they could survive my backpack unscathed.

One small peeve, though, is the main cable isn’t detachable from the headset proper, so if you do happen to somehow cut through it, or fall victim to a Instagram headphone-cutting influencer, your headset will be toast.

On the upside, Asus supplies you with an audio splitter cable that separates your audio and microphone into dedicated connections, so you won’t need to go purchasing one; you’ll only have to ensure you’ve got your headset properly selected in your audio settings to make full use of it.

Asus says the Go Core’s 40mm Neodymium drivers produce sound with a frequency response of between 20Hz and 40KHz, which is considered decent for a gaming headset.

To test the audio performance, I tried out the Go Core in a panoply of PC games, some relatively new, like Elden Ring and Sniper Elite 5, and some older classics like Call of Duty: Black Ops. Altogether, it proved a capable performer. From multiplayer deathmatches, to solo expeditions in Elden Ring’s ‘the Land Between,’ the sound was delivered clearly and realistically—enough to immerse me fully in my gameplay.

Three quarters of the audio in my games was in the higher tonal end of the spectrum—so it was easy enough to verify the quality of the Go Core’s highs and mid tones—sounds like the clang of gunshots and ricochets sounded crisp and natural. The headset also relayed quieter atmospheric sounds very clearly—like birds’ chirps, the hum of a powerplant, or the swoosh of chopper blades overhead.

I had to wait a bit longer to hear enough bass to make a judgement, but finally got my chance when the Call of Duty: Black Ops soundtrack cut in between multiplayer rounds. Asus says the bass has been optimized for a “deep immersive experience,” and judging by the deep synthesized notes I heard, I would agree.

If I could nit-pick just one thing about the audio, it would be that the Go Core sometimes sounds a little distant in multiplayer matches, where action happening nearby could have been delivered with fuller audio impact. But that’s to be expected considering the Go Core lacks spatial audio software support, which had it been included, would have brought a fullness and directionality to the sound. Still, apart from being a small inconvenience it never really made a difference to my gameplay.

On the ambient noise front, though, the Go Core fares reasonably well, considering there’s also no dedicated active noise cancellation to speak of. The firm seal provided by the leatherette material in the earcups provides a sound barrier that, on the whole, does an acceptable job keeping a range of sounds at bay.

To be sure, nearby conversations, traffic noise, and the clinking of dishes, were all sounds that became faint and barely perceptible to me with my cans on. Only the cry of a baby and a car alarm pierced through my playtesting, with everything else mainly shut out so that I had minimal distractions.

Accordingly, if you’re tossing up whether you should spend the extra money to buy the $249.99 ROG Strix Go BT over the Go Core for the benefit of getting ANC and you don’t need the Go BT’s Bluetooth connectivity, you probably should just go with the Go Core that does a respectable job cutting out noise—and for $170 cheaper.

The Go Core comes with a detachable cardioid boom microphone that slots in easily to the front of the left earcup. It bends nicely and has a decent length, so it falls close to your mouth. In the box you also get a pop filter that slides over the microphone tip to dampen your voice.

Looking at the mic specifications reveals they’re fairly standard for a midrange headset—it has a unidirectional pick-up pattern with a frequency response of 100Hz to 10KHz and a sensitivity of -45dB. That last spec means you can speak very quietly, and your teammates won’t miss out on hearing all your gaming tips. My testing proved it could get the job done—it reproduced my voice naturally and loudly in causal gaming chats.

Unlike some headsets in the Asus ROG range, the microphone doesn’t come with AI noise cancellation, but I found this made minimal impact, since the unidirectional mic only really picked up sound right in front of it—my voice jabbering relentlessly on Discord. Speaking of Discord, the Go Core is rated Discord and TeamSpeak certified, so expect it to work seamlessly with each.

Software support or no?

It’s fair to say that the Go Core skimps a little on the unnecessary extras, which allows Asus to ship it for such a reasonable price, but that also means it doesn’t have bundled software support. That limits you to your in-game or device settings should you want to adjust EQ, microphone settings, or apply surround sound support.

Consequently, the Go Core might not suit you if you’re an e-sports player or serious audio tinkerer wanting a little extra control over your settings, but if you’re just a casual gamer you will still get by perfectly fine. Plus, you can easily adjust the volume and mute the microphone physically via the left earcup.

Should you buy the ROG Strix Go Core?

The ROG Strix Go Core provides a value proposition that’s hard to resist, covering all your basic gaming audio needs for just $79.99. You get respectable sound quality, extreme portability, and the convenience of 3.5mm connectivity, and in a headset that looks sleek and sophisticated.