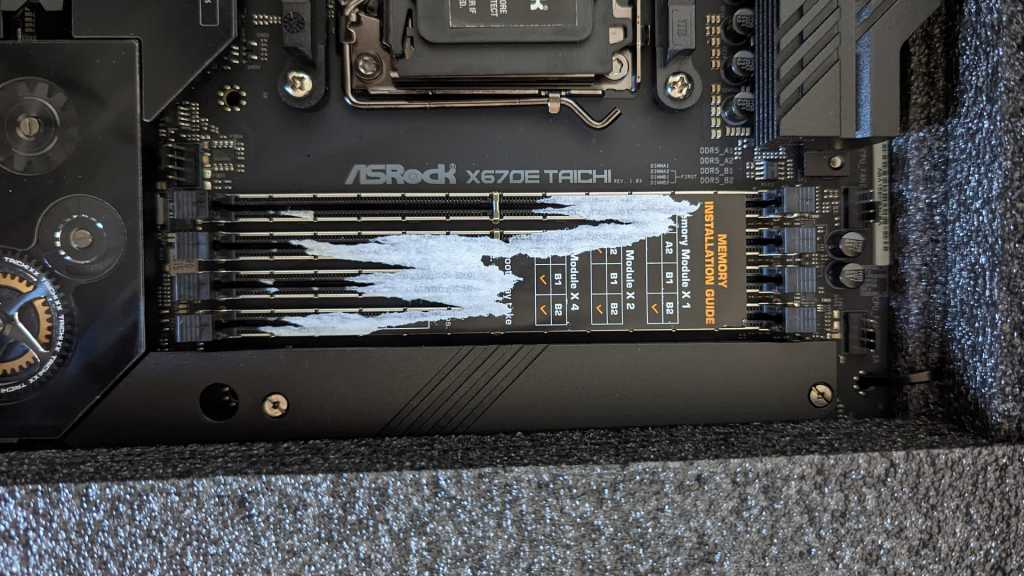 You’d think that a company selling motherboards directly to desktop PC builders would have a little bit of faith that those users can assemble a PC. Apparently, that’s not the case for Asrock, at least on some variants of its high-end motherboards for the new AMD AM5 socket. Several Reddit users opened their X670E motherboards to find a huge sticker covering the RAM DIMM slots, which in at least some cases has caused damage to the slots when the user removed it.

According to the Reddit posts spotted by TechSpot, the sticker is ostensibly meant as a guide for installing the RAM. It shows where to place single or double DIMMs if you’re not using all four slots simultaneously and how long to expect the (very lengthy) first boot to take based on how much memory is installed. All helpful information and perhaps it’s understandable that Asrock would want to highlight it — maybe a lot of people were returning motherboards after putting one DIMM in the wrong slot and watching their computer fail to boot.

But there had to have been a better solution than sticking a piece of paper directly on top of hundreds of sensitive electrical contacts, complete with adhesive. Several users reported that the sticker tore when they removed it, leaving behind a sticky residue and an incredibly delicate cleanup job. Buyers ready to assemble brand new, screaming-fast Ryzen 7000 desktops with these very pricey motherboards were not amused. Some had luck removing the stickers by applying heat beforehand, but others were left with a sticky mess that made their RAM slots inoperative.

The story has a happy ending, or at least a satisfactory one. An official statement from Asrock says the company will accept exchanges on motherboards that have sticker residue on the RAM slots. It also says that an updated version of the BIOS solves the long initial boot problem, and thus new motherboards won’t come with the sticker. Even so, it’s an embarrassing illustration of what can happen when you don’t trust your customers.