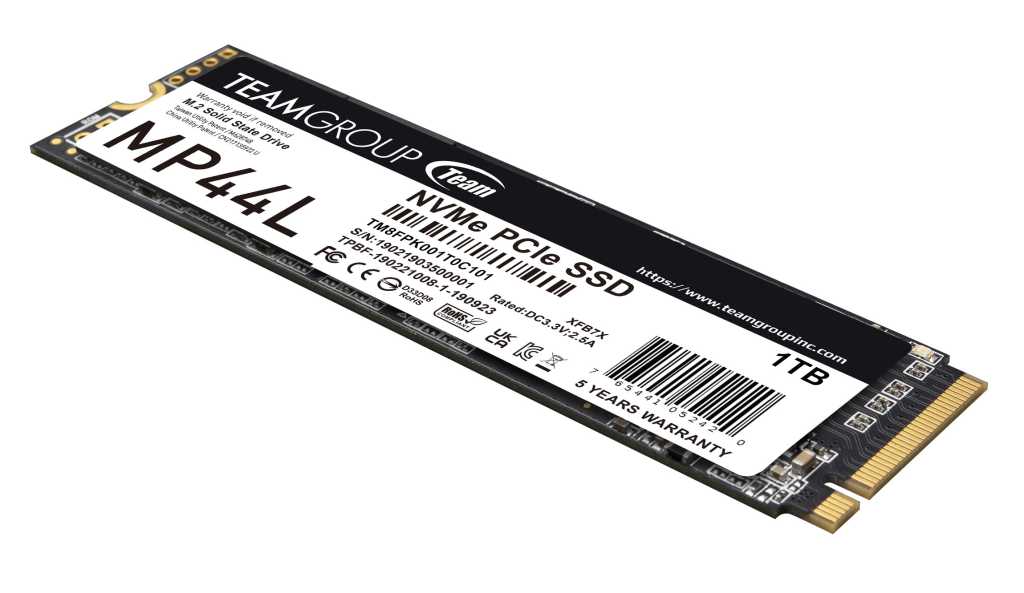 Teamgroup
At a glance

The Teamgroup MP44L is a lower-tier PCIe 4 performer on benchmarks, however real-world speed is very good and there’s no arguing its low price.

While its benchmark numbers may not be showy, the Teamgroup delivers the goods in the real world. It’s also one of the most affordable NVMe SSDs we’ve yet tested. In large part thanks to a DRAM-less, HMB (host memory bus) design.

You can probably guess the basics of the MP44L if you’ve read any of our reviews. It’s the standard 2280 (22x80mm) form factor and the pricing (see below) is a huge clue as to the aforementioned DRAM-less (HMB) design. The controller is Phison’s PS5021-E21T while the NAND is 176-layer (3D, stacked, etc.) TLC (triple-level cell/3-bit).

The 1TB version we tested is single-sided and therefore well-suited to laptop upgrades. Being HMB, the MP44L’s caching is done by treating a portion of the TLC NAND as SLC (single-level cell/1-bit) by writing a single bit instead of three. Writing one bit requires far less error checking and is consequently a lot faster.

Though the MP44L didn’t come close to the top dogs in the synthetic benchmarks, it was a good real-world performer. I’ve included the best-in-class WD SN850X in the charts to illustrate the difference, as well as to point out how sustained real-world performance isn’t all that different.

As you can see above and below, judging merely by CrystalDiskMark 8, you’d probably think the MP44L is a slow SSD. It is compared to a WD SN850X in synthetic benchmarks, but the real world is another matter.

Below you can see that real-world 48GB transfers don’t seem to care much about DRAM. Random write ops will, but not as much as you might think.

Where our 1TB test MP44L did fall off the pace was in the long 450GB write. This is designed to show weaknesses in caching, and it shows up more with 1TB units than 2TB SSDs due to less NAND being allotted for SLC cache.

Below you can see the slightly erratic copy speeds displayed by the MP44L. This is indicative of the controller dynamically allotting more NAND for cache. That said, the time remaining is misleading as it was calculated during a dip, not a peak. The MP44L took only 5 minutes total and the 2 minutes, 15 second Windows 11 estimate shown actually proved to be less than a minute.

For everyday use, the MP44L is a good performer. After all, how many times are you going to write 450GB in one go?

Should you buy the Teamgroup MP44L?

Teamgroup’s MP44L is good-performing bargain NVMe SSD. While it may not deliver the absolute fastest peak performance, it’s certainly fast in the grand storage scheme and will save you quite a bit of money for only a slight and largely unnoticeable (subjectively) performance penalty.