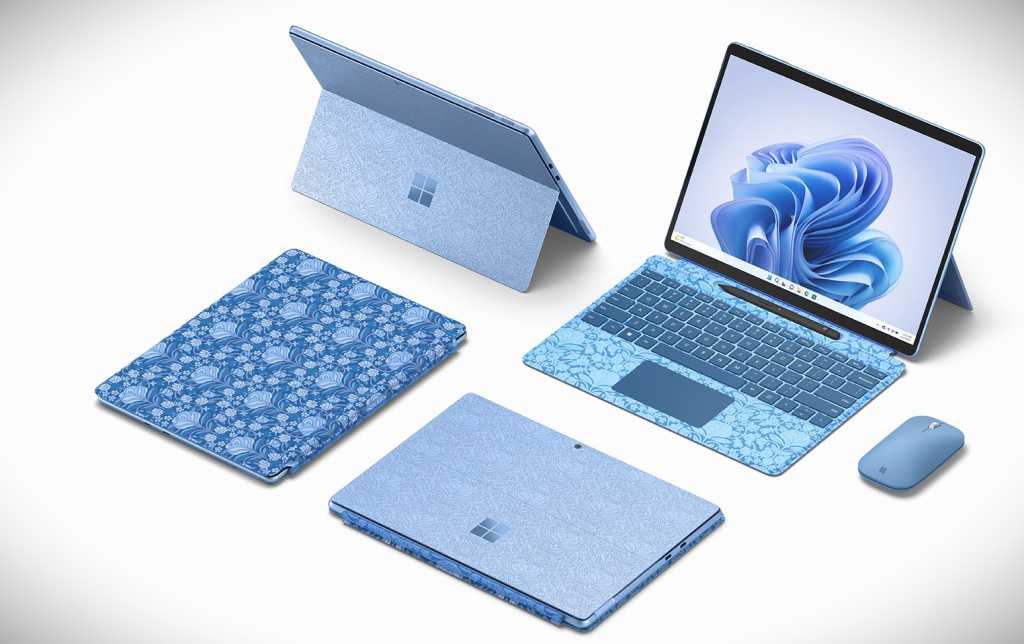 Microsoft’s Surface Pro 9 is noteworthy in one particular aspect: You now have a choice between an always-connected version with an Arm processor, or a more powerful 12th-gen Core chip for more traditional use.

It’s fair to say that that the Surface Pro 9 is essentially identical to its predecessor, the Surface Pro 8, with exactly the same physical dimensions (11.3 x 8.2 x 0.37 inches). Microsoft shaved 0.02 pounds off of the chassis weight, however, so both the SQ3 and Core versions weigh in at 1.94 pounds, with a slight variation for the SQ3’s WWAN options. Granted, this makes the Arm-powered version slightly thicker than Microsoft’s Arm-powered Surface Pro X.

A key feature of the Snapdragon architecture is the neural processing unit (NPU). Recall that Microsoft took advantage of this capability in enabling Eye Contact, an AI-powered feature that makes it appear as if your gaze never wavers from the camera during a Teams call. Microsoft implemented this inside the Surface Pro X, and a more full-featured version, known as Windows Studio, ships with the Surface Pro 9’s SQ3 variant.

There’s something special, too: “To help us celebrate 10 years of Surface, we’ve partnered with London-based global design house ‘Liberty’ to bring art and technology together to create a special-edition Surface Pro keyboard and laser-etched Surface Pro 9 with an exclusive pattern in a vibrant blue floral inspired by the Windows 11 Bloom—available in select markets, only at Liberty and Microsoft Stores while supplies last,” Microsoft’s chief product officer, Panos Panay, wrote in a blog post.

Internally, Microsoft is now using LPDDR5X (versus the SP8’s LPDDR4X) memory and making all of the SSD options removeable. The Surface Pro 9 with 5G, however, doesn’t quite offer all the same goodies as its Core cousin, with older memory technologies and smaller storage options. It appears Microsoft also finally did away with the 3.5mm headphone jack, replacing it with an external Audio Dock instead.

How to choose which Surface Pro 9 to buy

The Surface Pro 9 variants do have a few tradeoffs. For one, Intel’s new 12th-gen Alder Lake chips dramatically outperform their predecessors, the 11th-gen Core chips, while a footnote attached to the Surface Pro 9 with 5G notes that the tablet “will not install some games and CAD software, and some third-party drivers or antivirus software,” due to the Arm chip inside—games with OpenGL 1.2 or above or with anti-cheat software, essentially. Remember, too, that the Thread Director software included in Windows 11 (not Windows 10, commercial users) has been tuned for Intel’s Alder Lake architecture.

Still, the Surface Pro 9 with 5G is the only Surface Pro 9 that offers 5G, and it also offers a moderate improvement in battery life. There are quite a number of different LTE and 5G options that Microsoft will offer, which we’ve included below for those who are interested.

Also, while Microsoft touted its “Windows Studio effects” as a feature for Windows 11’s 2022 Update (22H2), that feature never showed up in the real world. Now we know why: It will depend on the SQ3’s NPU. It looks like the Surface Pro 9 with 5G will offer Automatic Framing (a software-based zoom to “frame” your face in the center of the screen, if possible; the aforementioned Eye Contact feature; Voice Focus, which uses AI to filter out background noise; and Portrait Background Blur. The latter, of course, is used within Zoom and Microsoft Teams already, though it’s a feature of the app, not Windows.

Interestingly, Microsoft tells PCWorld that these features require 15 TOPS, or trillions of operations per second. Only the SQ3 or the related Qualcomm Snapdragon 8cx Gen 3 can deliver this AI performance, Microsoft says.

Microsoft is also saying that the new camera includes a “4-degree tilt,” but it’s not quite clear whether this is a physical feature or the leeway the camera has with Automatic Framing.

Microsoft also included a lengthy list of the various pricing options associated with the various Surface Pro 9 models—which, when you start factoring in the various options for the consumer models versus the Surface Pro 9 for Business, as well as the SQ3 versus Core, can get quite lengthy. It appears that Microsoft hasn’t settled on a few of its high-end prices, either.

We’ll have more on the Surface Pro 9 when and if we can get our hands on a review unit.