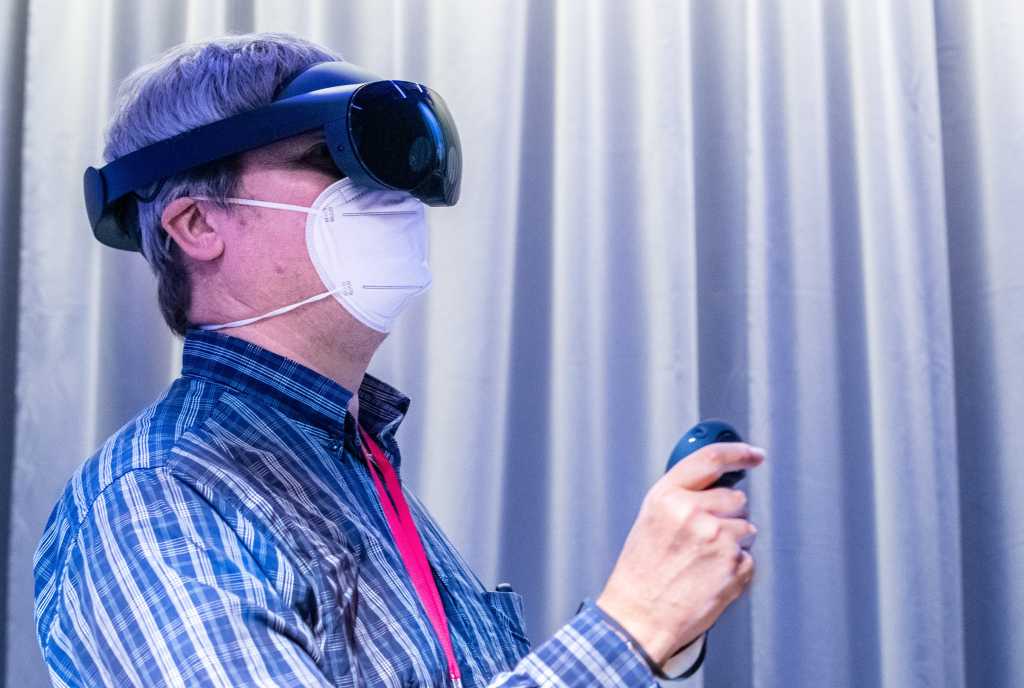 At the end of my hour-ish long demo session of the Meta Quest Pro, I had somewhat of a headache and a bit of disorientation, an unfortunate price to pay for an experience that ranged between truly impressive to somewhat uninspired.

The Meta Quest Pro represents Meta’s stab at a premium standalone AR/VR headset, one that’s confounded by the fact that the company doesn’t quite know what to with it. Executives say they see the Quest Pro as sort of a hybrid between a developer device and an enthusiast headset, where what works and what doesn’t will apparently be settled by some Darwinian leaderboard on which functions are used, and which aren’t. At $1,500, Meta surely won’t sell many.

Frankly, I don’t quite understand how Meta can sell a $1,500 headset with an hour or two of battery life, even with an optional two-meter charging cable that can tether you to a power outlet. I don’t have a Meta Quest 2 to compare the Quest Pro to, but the pixel count has slightly decreased, too, to 1800×1920 pixels per eye– not critical, especially with foveated rendering placing pixels where they’re needed, and a new mini-LED array lighting and dimming pixels like a TV. But on paper, even VR enthusiasts may have some sharp questions of the Meta Quest 2 and its sky-high price tag.

The Quest 2 feels much like Microsoft’s HoloLens. You put it on, back to front, and tighten the strap with a dial in the back. The whole contraption balances on your head on padded rests on the front and back, and felt comfortable enough for its 1.5-pound weight. There’s no measuring inter-pupillary distances or whatnot — it just works.

The Quest Pro succeeds as a mixed-reality headset because of the full-color pass-through cameras. If it’s set up properly, the Quest Pro works as an augmented reality headset, showing the “real world” to you in color and at low resolution, sort of like an old 480p CRT television. You can clearly see and interact with objects around you, provided that they’re fairly large. The field of view is 106 degrees on the horizontal and 96 degrees vertically, which is more than enough to avoid the claustrophobia of trying to fit a VR object on the tiny HoloLens screen, for example. Even better, the “real world” passthrough cameras can be programmed into regions, so that you can walk through a “portal” between the real and virtual worlds. That’s pretty damn cool.

And yet, there are some truly great things about this headset.

For one, the handheld controllers are something of a revelation. Truly independent, they don’t depend on the headset for positioning, and you can finally forget about them and wave them about as you would your hands. (The Meta Quest Pro does have hand tracking, though the headset cameras have to see your hands.)

Each controller has three independent cameras that track its path through space, and they work really, really well. In one demo, Meta constructed a virtual Jenga tower with realistic physics, and the controllers’ two independent triggers allowed me to poke and then grab various blocks with excellent sensitivity. It all felt somewhat like the decision to use keyboard commands versus a GUI — each controller has two buttons, a menu button, two triggers, and a thumbstick, but I was happy just pointing and clicking at menu options using the controllers. (Meta didn’t allow us to capture in-headset photos.)

Each controller also has a small, delicate haptic feedback sensor, too, communicating what objects “feel” like when you interact with them. Object physics felt quite natural: I was able to fling, accurately, virtual darts by grasping them between “thumb” and “forefinger” using the triggers, and squeezing a teacup a bit too hard cracked it. Other demos asked me to play mini golf on the physical floor. Meta’s press materials would lead you to believe that these controllers can be extensions of your hands. It’s not too far off.

Where I’m not as convinced about the Meta Quest has to do with my understanding of what it’s good for.

As a curiosity, the Meta Quest Pro is fantastic. The Tilt Brush app, which we’ve seen for years, remains a truly mesmerizing version of Microsoft Paint in virtual space. I faked my way through Tribe, a virtual DJ app, that was far too cool for me. But soon, you wonder, what did I pay $1,500 for, again?

I wrote a separate story on what I thought of Horizon Worlds/Workspaces, Meta’s metaverse for businesses. I wasn’t that impressed. One of the employees demoing the app said that he spent as much four hours in VR meetings. Four hours! I’m not sure my eyes could take it.

The other apps that Meta showed off didn’t do much for me, either. Worlds was a boring app led by a rather earnest, nice gentleman (sorry, Haldun) but it wasn’t much more than Google Maps in virtual space. And that was it, really. Maybe businesses will benefit from interior design or floating product concepts in virtual space, but I can’t really recommend it.

The Meta Quest Pro feels like a product that we’ll talk about for a day or a week or so, and then fade away, while consumers go back to trying to figure out how to pay their bills. Justifying a $1,500 VR headset with just two hours of battery life? In this economy? Talk about a tough sell.

Full disclosure: historically, our VR coverage was anchored by Hayden Dingman, who knew so much about virtual reality that Meta hired him. My AR/VR knowledge consists of testing the original Microsoft HoloLens and some experiences with Oculus and other VR hardware in the intervening years.