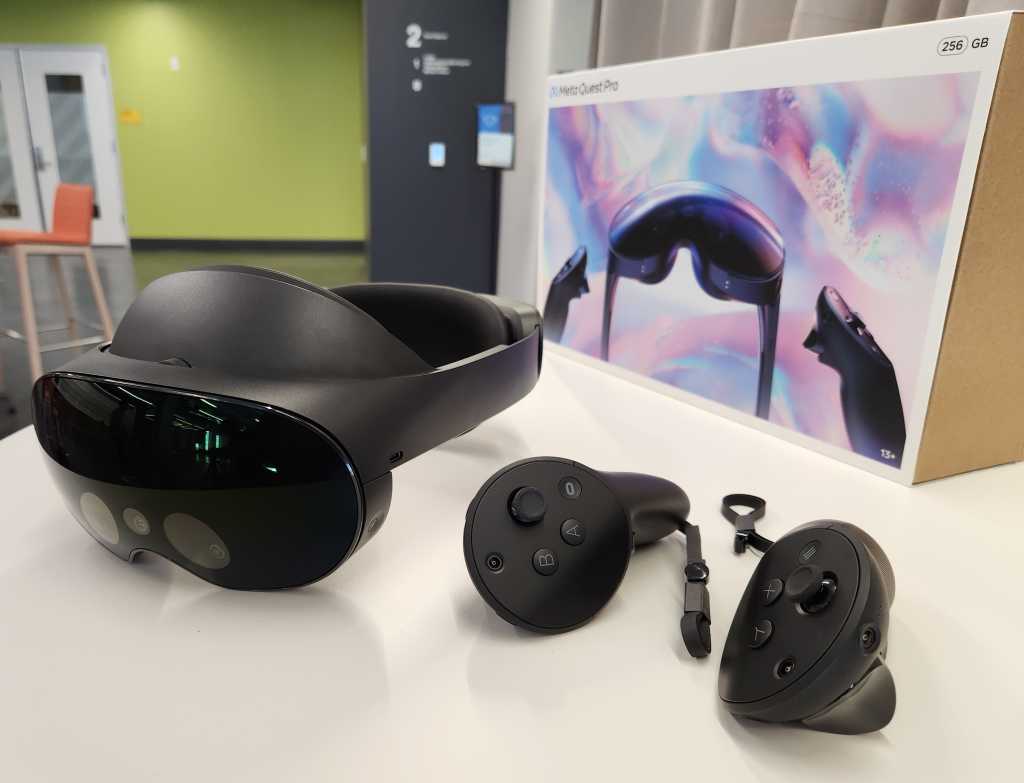 Meta’s new Meta Quest Pro is a $1,500 attempt to figure out what experiences people want in virtual reality.

Just a few months after Meta (Facebook’s new business name) actually raised the price of its standalone Meta Quest 2 consumer headset, the company has released a more powerful version that will form the foundation of a second, premium product line, executives said. A key improvement is in the Meta Quest Pro controllers: they can now determine their position in space completely independent of the headset, and can even be used as a stylus — with an odd little virtual nib, too.

Meta “took the foundation of a great gaming headset but it’s becoming even more,” said Anand Dass, director of Meta’s Metaverse content. Until now, the Quest Pro was known as Project Cambria.

The problem is that Meta executives don’t seem to know what to do with it. In a press conference, they described it as an experiment of sorts, working with developers and enthusiasts to figure out what works and what doesn’t. The difference is that Meta is hoping that businesses will adopt the Meta Quest Pro, in much the same way Microsoft pivoted from the consumer to the enterprise with the HoloLens 2.

The Meta Quest Pro is all about tradeoffs

In all, the Meta Quest Pro is both heavier and more powerful than its predecessor, the Meta Quest 2, with less battery and fewer pixels, but an improved rendering capability and field of view. It’s an unusual combination of tradeoffs for a premium device that’s almost four times the price of its cheaper cousin.

Somewhat surprisingly, the pixel count has slightly decreased as well. The Meta Quest 2 offers 1,832×1,920 pixels per eye. The Meta Quest Pro offers 1,800×1,920 pixels per eye, though they’re apparently spaced closer together, as Meta says that the Quest Pro offers 37 percent more pixels per inch than the Quest 2. That’s offset, however, by the Quest Pro’s use of foveated rendering and a new “pancake” optics stack, which Meta says increases object clarity: 25 percent improvement in sharpness in the center of your view, and a 50 percent improvement to the periphery. There’s even 500 LED blocks that use local dimming, increasing the available contrast like a TV.

The Quest Pro maxes out at the industry-standard 90Hz refresh rate, with a 72Hz option. That’s roughly comparable to the Quest 2, which launched at 72Hz, then added 90Hz and later 120Hz experimental modes for games. The field of view has increased, though; 106 degrees horizontal/96 degrees vertical, versus 89 degrees horizontal/93 degrees vertical in the Quest 2. A wider field of view translates into greater immersion.

Finally, the Meta Quest Pro weighs 722 grams (1.59 lb), versus the 503g (1.11lb) that the Meta Quest 2 weighed, though the weight perches on your forehead, with the battery counterbalanced by the weight of the lens assembly.

Meta does make some compromises. For one, the $80 Compact Charging Dock is designed to be convenient enough to be placed upon and charged when not in use, and there’s a two-meter charging cable that can be used as a power tether to keep the device charged, executives said. Otherwise, the charging dock will charge to a full battery in about two hours, Meta says.

Meta ships the Meta Quest Pro with the charging dock, controllers, and partial “light blockers,” to help turn the Meta Quest Pro into more of a VR device than a hybrid AR/VR headset. And remember, you don’t have to use a Facebook ID to log in — just a Meta ID from the same company.

What makes the Meta Quest Pro stand out

Beyond the numbers, however, three new features stand out. Meta’s new controllers use three independent cameras, mounted within the controllers themselves, to instantly determine where in space they are and communicate this information back to the headset via SLAM controller tracking. (The Quest Pro uses both Bluetooth 5.2 and Wi-Fi 6E for data communication.) Each controller includes a menu button, a thumbstick, two extra buttons for control, and both thumb- and index-finger triggers.

The result is much finer peripheral sensors than Meta’s technology has allowed for in the past. The individual triggers can be programmed to “grip” objects, and small haptic sensors in the controllers themselves communicate feedback on whether you’ve “grabbed” the object in question. The improved precision also translates into the ability to “write” notes in VR using the small pen nib — which is quite odd, given the shape of the controllers, but precise enough to actually allow inking in virtual space.

The other new addition is full-color mixed reality. The Quest Pro includes ten MR/AR sensors, with five pointed at your face and an additional five pointed at the world around you. This allows for hand tracking without the need for controllers, but also allows you to “see” the world around you with the headset on via the passthrough cameras. Now, you can see this external view in full color.

Developers can also define “regions” in virtual space to show mixed reality versus virtual reality, so that you could pass through a portal from the real world into virtual space. “Meta Quest Pro’s high-res outward-facing cameras have 4X the number of pixels as Meta Quest 2’s cameras, enabling the headset to recreate the environment around you in VR with greater fidelity,” according to the company.

The user-facing cameras have another function, though — they track 72 different aspects of your face, and communicate them to whoever is interacting with you. The result allows Meta to more accurately represent your face, from the movements of your eyes to your smile, teeth, even whether your cheeks are puffed up or not. This eye tracking and facial expressions are off by default to preserve privacy, but, Meta clearly hopes that you’ll turn them on to make your virtual experience more like real-world interactions.

Beyond that, though — well, Meta seems to be a little in the dark.

According to Meta executives, there are 400 AR apps on Meta’s app store that will work with the Quest 2, and they’ll work on the Quest Pro now as well. Meta hopes that users will turn to the headsets for professional use, including both Horizon Worlds (the Meta metaverse) and its work-specific variant, Workspaces. There’s even a Meta-optimized version of Adobe Acrobat, a mindfulness app, AutoDesk optimizations for the Meta Quest Pro, and more.

But what apps remain a year from now, or more — well, Meta doesn’t seem to know. After all, even its own employees don’t seem to be in any hurry to use Horizon Worlds, its metaverse app.

“How these use cases get adopted, and which ones stick — that will help us inform which use cases make sense to bring down to our entry line of products,” said Rupa Rao, a member of the product management team at Meta and lead for its VR devices. “So the development of both lines of products in parallel allow our developers to push the boundaries of what’s possible in VR. And based on our reaction to our customers, and those use cases, decide how to bring it into our entry lineup.”