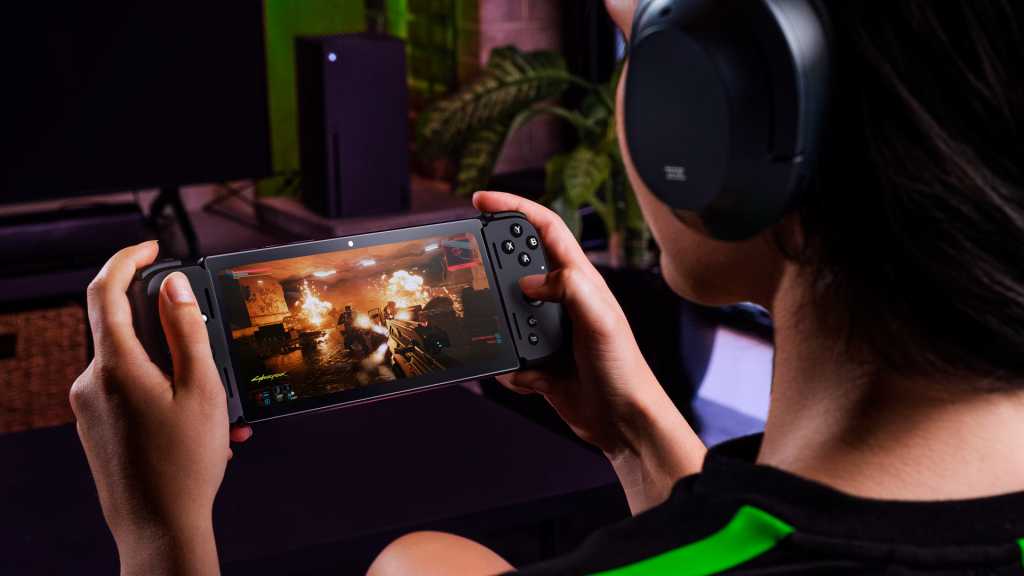 Razer is no stranger to mobile gaming, having released two Android-powered phones and several phone controllers in the past. But the new Razer Edge is its most ambitious mobile gaming device to date. Ostensibly a small Android-powered tablet (not, we are assured, another phone), its custom add-on controller in the Kishi style makes it an erstwhile competitor to Nintendo’s Switch. But while Nintendo has always relied on its own brand as a platform, Razer and its partner Verizon are leaning on the emerging power of streaming games to get players excited.

Tiny tablet, not a phone

The core of the Edge is a 6.8-inch tablet, with an extra-wide 1080p AMOLED screen with an impressive 144Hz refresh rate and 288Hz touch sampling. Underneath is a custom-made Qualcomm Snapdragon G3x processor, boasting an octa-core design that can boost it up to 3GHz with the help of active cooling. Other specs include 8GB of RAM, 128GB of storage, a 5000mAh battery, “immersive Hypersense haptics,” Wi-Fi 6E for low-latency streaming, and a front-facing camera. It’s all running on a custom-tuned build of Android 12.

But that’s only half of the story. What makes this a gaming device instead of a rather nice, if small, tablet is the Kishi V2 Pro controller, which plugs in and locks onto the screen segment. Again, this is reminiscent of the Nintendo Switch, albeit without the wireless controllers (it connects via USB-C with a pass-through charger and headphone jack). The Kishi controller includes all the standard console controls in an Xbox-style layout, with programmable buttons, full analog triggers, and precision micro-switches.

Streaming on Wi-Fi or 5G

And what, pray tell, will you be playing on the Edge? While the device will run Android and have access to thousands of mobile games via the Google Play Store (and the Epic Store for easy access to Fortnite, no side-loading required), Razer is focusing on game streaming services to make the Edge appealing. It’ll come pre-loaded with apps for Nvidia GeForce Now, Xbox Game Pass, and Steam streaming. (Amazon Luna should be playable, but the recently axed Google Stadia is a no-show in Razer’s promotional materials.) This makes the Edge a more powerful and flexible take on Logitech’s G Cloud console, rather than a direct competitor to the AMD Ryzen-powered Steam Deck, which focuses on running PC games on its own hardware.

Razer has one more trick up its sleeve: a partnership with Verizon. The pair will release a 5G version of the Edge exclusive to the American carrier’s network. Though it is a mobile device, Razer was emphatic that the Edge is not a gaming phone, as it has made in the past. “This is not the Razer Phone 3,” we were emphatically told. The Edge 5G won’t be able to make phone calls or send texts on its own, though you can load up VOIP apps via the Play Store if you want to.

The Wi-Fi version of the Razer Edge will launch in January for $399.99, with its controller attachment included. The Edge 5G will come later for an undisclosed price, sold exclusively by Verizon. (Razer didn’t say whether the streaming-focused device will have access to more forgiving unlimited 5G wireless plans.) Razer is taking reservations for the Wi-Fi version now, as well as opening a limited early beta tester program. You can go to rzr.to/edge to apply.

Can Razer compete with Valve and Nintendo?

The mobile market has certainly expanded in interesting ways since Valve introduced the Steam Deck. It’s aligning into two broadly disparate clumps: relatively large, PC-based hardware like the Steam Deck, built on the excellent integrated power of AMD’s Ryzen APU designs, and Android-based devices like the Edge and G Cloud, which either focus on streaming or on low-powered emulation of older console games. And speaking of consoles, Nintendo still absolutely dominates mobile gaming, even though the Switch (itself based on Nvidia ARM hardware) is six years old at this point.

Can Razer crack the code to find a place in the mobile market? The odds seem long. The last time a PC-focused brand tried was when Nvidia made the original portable SHIELD. Android failed to distinguish itself as a gaming platform…though that could be more of a mobile gaming issue than an Android one. Nvidia eventually transitioned the SHIELD away from gaming and into a kick-ass set-top box, abandoning the Android gaming market to a few “gaming phones” and low-powered but popular emulation devices.

The Razer Edge is $400 for the basic version, $50 more than the Logitech G Stream, which is already $50 more than the standard Nintendo Switch. Portable gaming has historically gone to the lowest bidder, and Nintendo has them both beat with the Switch Lite at just $199. Between advances in integrated graphics power and game streaming, we’re seeing full-powered PC and console games go portable for the first time. Is there room in the market for Valve, Nintendo, and a streaming-focused alternative from Razer or Logitech? It’ll probably take another year at the very least for gamers to decide.