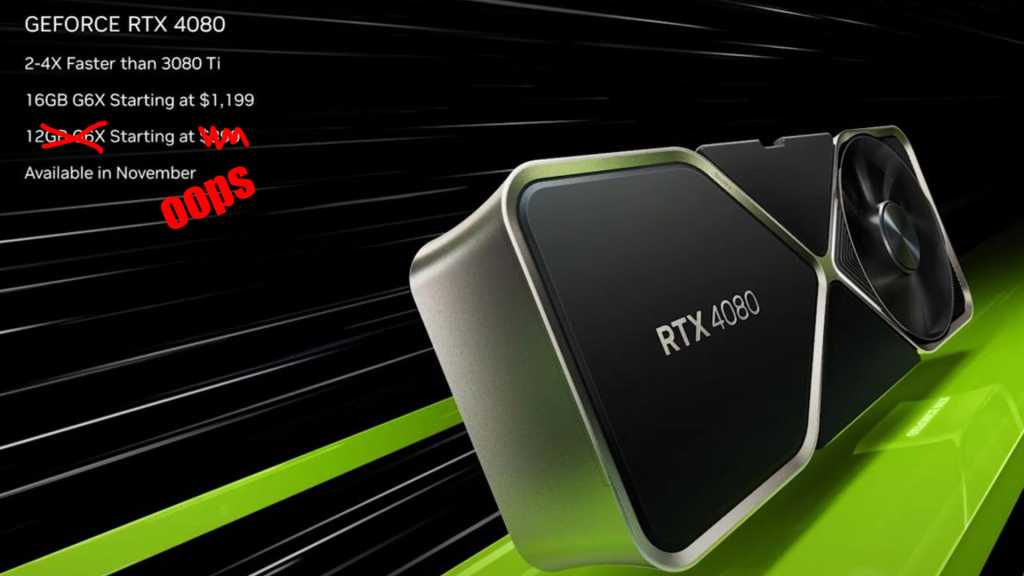 Ever since the launch of the enormously expensive RTX 40-series, featuring the RTX 4090 and both 16GB and 12GB flavors of the RTX 4080, some gamers have called foul on Nvidia for the last entry in that list. The 12GB variant of the latest GeForce RTX 4080 card isn’t just a dip in memory, as the name implies, it also lowers several other key specs. Some gamers (including yours truly) said that it would be more appropriately called the RTX 4070, and priced as such. Nvidia seems to agree on the former point, if not necessarily the latter: The GPU maker is canceling the 12GB version of the card, for now.

“The RTX 4080 12GB is a fantastic graphics card, but it’s not named right,” admits Nvidia in a short-but-sweet blog post. “Having two GPUs with the 4080 designation is confusing.” The company is referring obliquely to the fact that the 12GB version of the card has a different chip design with markedly fewer CUDA cores and a more restricted memory interface, plus a very slightly boosted base clock. The price for the 16GB version of the card is $1,199 and seems to be unchanged, while the 12GB version was formerly set at $899, both considerably more than their RTX 30-series equivalents.

“So we’re pressing the ‘unlaunch’ button on the 4080 12GB,” says Nvidia. Exactly what it plans to do with presumably thousands of ready-to-ship graphics cards isn’t specified, though the company notes that the 16GB version of the RTX 4080 is ready to go for its retail debut on November 16.

Whatever its plans, Nvidia certainly isn’t going to throw away huge batches of expensive graphics cards. This is pure speculation on our part, but perhaps Nvidia will hang on to them and make the 12GB 4080 the RTX 4070 it should have been in the first place. Maybe it will even deign to lower that price a bit—with Intel and AMD poised to take advantage of Nvidia’s hubristically high prices, it couldn’t hurt.