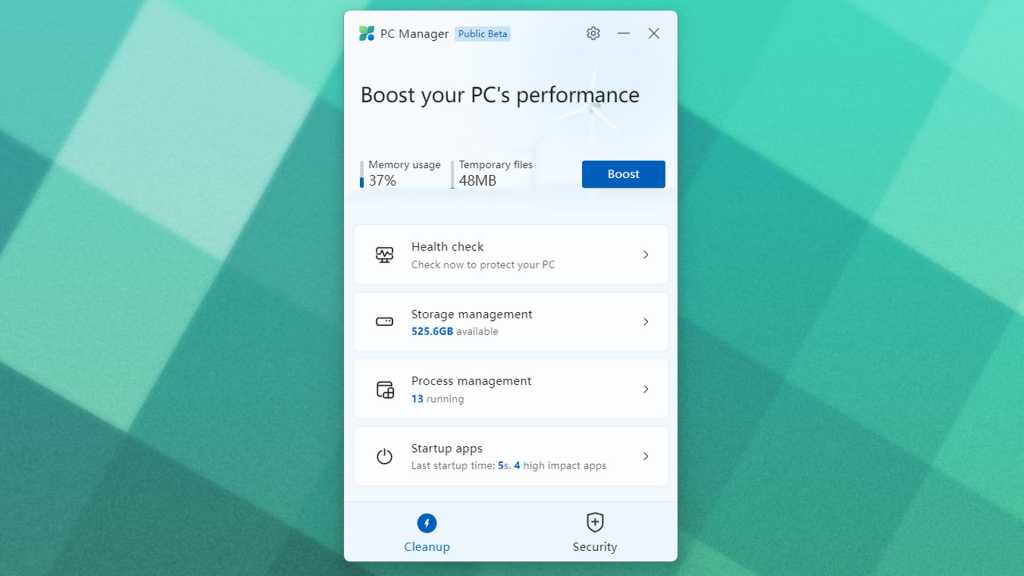 Windows often gets bogged down with unnecessary files, kind of like a teenager’s bedroom floor. Microsoft has improved both Windows itself and the tools designed to manage it in the last few years, and it looks like the company is preparing yet another way for users to keep their PCs running smoothly. A beta version of “PC Manager” has appeared on a Microsoft site in China, apparently offering a completed tool that should look familiar to users of the classic CCleaner freeware.

Though the site is entirely in Chinese, the tool itself has Microsoft’s publisher signature and appears to be safe and complete, and it installs in English on my PC. It offers a centralized location for several tools that are already present in disparate parts of Windows’ various settings menus and management programs. The apparently complete tool will clear away unused temp files, perform a deep scrub of storage disks, and quickly show running processes and startup programs (which has been easier to find in the Task Manager since Windows 10). The “Security” tab is basically an easy interface for Windows Update and Windows Security.

The app was spotted by The Verge, which notes a lot of similarities to freeware PC optimization tools like CCleaner. It’s also yet another example of Microsoft’s less-than-subtle push for users to switch to its Edge browser. The “Browser Protection” tab offers a dedicated switch button. But bringing back an easy-to-use, easy-to-recommend cleaner tool might be a big deal for those of use who are our family’s de facto tech support departments.

For more than a decade, a program called CCleaner was at the top of every freeware recommendation list. It was an idiot-proof way to clear up the often-messy Windows registry and other unwanted files gunking up a hard drive. But after the developer was acquired by Avast in 2017, bundled with the often-pushy antivirus software, and accidentally came with a trojan horse infecting millions of computers, it had a hard and fast fall from grace. CCleaner is still offered by Avast in both free and paid forms, but it’s been largely eclipsed by other freeware and more user-accessible tools built into Windows.

Despite the tool being marked as a “Public Beta,” Microsoft hasn’t made any mention of PC Manager outside of China. We’ll be keeping an eye out for a wider release. In the meantime, check out our guide to the best free software for your PC. Microsoft’s new tool might just make the list once it gets a proper launch.