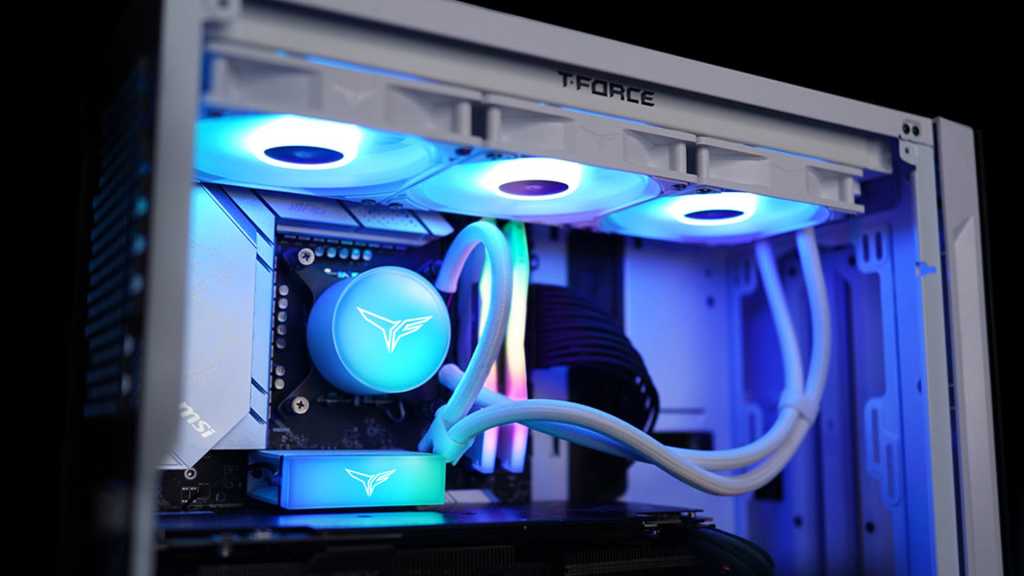 As flash storage becomes the latest PC component to succumb to the temptation of flashy LEDs and oversized coolers, PC suppliers are more than willing to indulge the excesses of builders. Those with more money than sense might want to check out the latest all-in-one liquid cooler from TeamGroup. Not only will the T-Force Siren Duo360 ARGB cooler (just rolls off the tongue, don’t it?) cool your CPU with shiny LED goodness, it’ll cool down your fancy M.2 SSD as well.

Tom’s Hardware spotted the new design, scheduled to launch to the usual retail subjects sometime in November. The cooler’s preconfigured loop includes dual translucent water blocks for the CPU and the SSD, compatible with all the latest hardware designs, including Intel LGA 1700 and AMD AM5 sockets. The SSD cooler works with M.2 modules up to 80mm in length, and yes, that includes cutting-edge PCIe Gen-5 models. If you’re feeling creative, the RGB-LED lighting module on top of the SSD water block can be magnetically detached and stuck somewhere else inside your case. The various lights are compatible with LED manager programs from Asus, Asrock, Biostar, Gigabyte, and MSI.

Doing the thermal work is a 396mm-long water block with three 120mm fans, naturally festooned with their own LEDs. TeamGroup claims that when it’s all set up and ready, it can reduce the operating temperature of a full-load Gen 5 SSD by “more than 50%” from 100°C. Of course in order to actually use the full system, you’ll need a motherboard that exposes its M.2 slots somewhere in reach of the tubing going to and from both the radiator and the CPU — 430mm and 230mm, respectively. Break out the rulers before you buy it.

And how much does it cost, pray tell? The whole kit and kaboodle will set you back $399 when it launches next month. That’s a lot, but honestly, if your system is so powerful and running so hot that you need custom liquid cooling just for your storage, it might just be worth it.