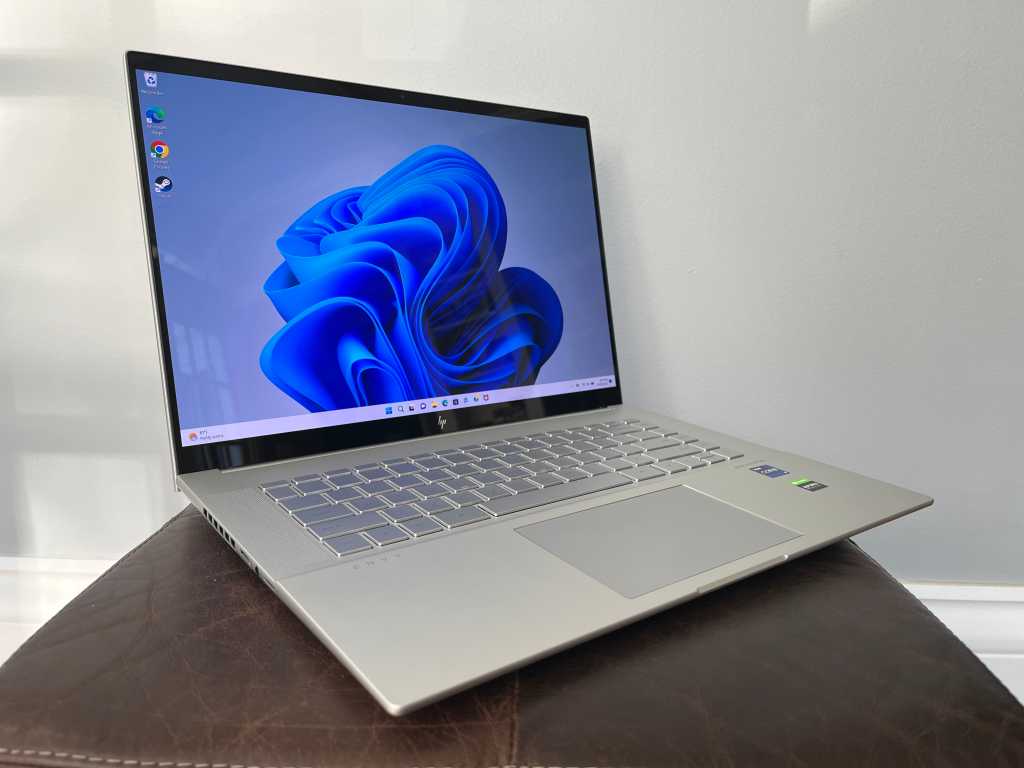 A big, 16-inch 16:10 laptop for content creators, the HP Envy 16 falls short of competitors from Asus and Dell.

The HP Envy 16 is a big-screen, content-creation laptop that packs a punch. With a roomy 16-inch 16:10 display, media professionals and hobbyists have plenty of space on which to work. And our test system features an OLED panel that offers a dynamic image with a stellar contrast ratio. Powering the display on our test system is an Intel Core i9-12900H CPU and Nvidia GeForce RTX 3060 GPU, a duo that puts our test system on the high end of the price scale.

HP offers smart and wide-ranging configuration options for the Envy 16 and, while you can configure a model for your needs and budget, you’re stuck with a rather hefty travel companion. At just over five pounds, the laptop is heavy even among 16-inch 16:10 models. I’m also not wild about HP’s trend of outfitting its laptops with low-contrast keyboards that feature silver keys and gray key symbols, a design decision that puts form over function. In the end, the Envy 16 doesn’t surpass better content-creation options from Asus and Dell.

Our HP Envy 16 test system is priced over $2,000 and features the following specs:

The OLED display option is not yet available in the US. With just the touch-enabled 2560×1600 IPS display, the cost of our test system would be $2,199.99. Upgrading to the OLED panel will likely push the price close to $3,000. However, HP did not provide pricing info for the OLED panel. While our OLED panel provides bright white and true black levels, the 2560×1600 IPS display should be more than sufficient to create a crisp image across the 16-inch display. What you lose in contrast ratio and resolution you gain in refresh rate, going from 60Hz on the OLED panel to 120Hz. If you might be looking to put the RTX 3060 GPU to 3D gaming use in addition to content creation, the faster panel is of great importance.

The Envy 16 is a sea of silver. The all-aluminum chassis features a silver lid, silver keyboard deck with silver keys, and a silver bottom panel. With branding and design flourishes at a minimum, the laptop looks built for business. The company’s funky HP logo is centered on the lid and below the display, while Envy badges are located on the keyboard deck and the back edge of the display lid. There’s also Bang & Olufsen branding on the keyboard deck to signify the sweet tuning of the laptop’s quad-speaker alignment. (I’ll get to the Envy 16’s impressive audio output in the next section.)

Not quite an inch thick, the Envy 16 cuts a fairly trim profile for such a large laptop. It’s certainly more compact than gaming laptops and other high-end models that must keep RTX graphics from overheating. Looks can be deceiving, however, because the Envy 16 is heavier than it appears. It tips the scales at five pounds, which is on the heavy end of the scale for a 16-inch laptop. By comparison, Lenovo ThinkPad Z16 weighs only 4.3 pounds, and HP’s own Spectre x360 16 weighs only 4.45 pounds.

Let’s start with the good news on the keyboard. The keys are roomy and well-spaced and offer snappy feedback. HP also omitted a number pad, which I consider addition by subtraction. A numpad often makes an appearance on 16-inch laptops but does not here. I’d rather have the keyboard centered under the display with no shortened keys than have it shifted over to the left with some keys diminished to accommodate a numpad. In place of a numpad, the Envy 16 has a helpful column of keys on its right side with Page-Up and Down, Home and End keys. Along the top row of Function keys are two appreciated inclusions: a key to mute the microphone and another to kill the webcam. Both keys have small LEDs so you know when each is enabled.

Now the bad keyboard news: with the Envy 16, HP continues its trend of outfitting its laptops with a low-contrast silver keyboard. The silver keys with gray key symbols make it impossible to read the keyboard in certain light. The keyboard can look blank, as if it’s some sort of touch-typist test. And the keyboard backlighting often doesn’t help since it just adds white light to the light silver keyboard. Why not stick with the tried-and-true black keyboard with white symbols? There’s a reason that’s the standard.

The touchpad is big enough not to feel cramped yet compact enough to avoid bumping it when you don’t intend to. Its matte finish offers smooth gliding, and it accurately recorded my mouse gestures. The click response is spot on with the perfect amount of travel and a quiet response.

The 4K 16:10 OLED panel on our test system is awesome. Incredibly sharp picture with an unparalleled contrast ratio and absolute black levels. It’s rated for a sufficient 400 nits and  covers 100% of the DCI-P3 color gamut. Colors look accurate and details remain visible in the brightest parts of an image as well as the darkest. For creators doing detailed image or video work, an OLED display offers clear advantages over an IPS panel.

The 16-inch 16:10 aspect ratio makes the display feel much larger than the 15.6-inch 16:9 widescreen display on last year’s Envy 15. If you’ve been working on a small laptop connected to an external monitor, the Envy 16 provides enough screen real estate that you won’t need to link up to a monitor as much. It provides enough room to juggle multiple windows and work with two windows side by side. Unless you spend much of your time in front of your laptop watching movies, the 16:10 ratio is the way to go.

If you are looking for a content-creation laptop that can also double as a gaming laptop, however, then you might want to forego the 60Hz OLED panel for the 120Hz IPS option. HP offers a lower-resolution 2560×1600 IPS panel with or without touch support, and each has a refresh rate of 120Hz that’s a better fit for fast-moving games. And with the optional RTX 3060 graphics, the Envy 16 does have some 3D gaming capability.

The webcam provides two items on any laptop buyer’s checklist: a 1080p resolution and IR capabilities. At 1080p, it displays a crisp, well-balanced image that’s far superior to the grainy, over-exposed result of an older 720p camera. And with IR, the webcam works with Windows Hello to let you login via facial recognition — easier and more secure than a password. And while it doesn’t have a physical privacy switch, you can kill the camera by toggling a Function button on the keyboard.

With its four-speaker array, the Envy 16 produces booming laptop audio. There are two speakers that fire upwards from either side of the keyboard, and there are two speakers that fire downward from the curved front edge of the bottom panel. The sound is surprisingly robust, with clear highs that are separate from the mid-tones and a bit of bass on the bottom end. The speakers have enough oomph for watching movies and shows without headphones — dialog was clear and effects sounded powerful. And music playback was enjoyable, a rarity among laptops.

A pair of USB-C ports with Thunderbolt 4 support highlight the port selection, but you also get two USB Type-A ports, which saves you from having to keep track of an adapter. Oddly, the USB-A port on the left side has a drop-down jaw while the USB-A port on the right does not require such awkwardness. I almost ripped the jaw off once by accident when putting the heavy laptop down on a table — handle with care. With no obvious need for the inclusion of a second USB-A port, I’d rather HP skipped it. There’s also an HDMI port and a MicroSD card reader, a useful inclusion specifically for a content-creation laptop to streamline getting files from your camera to the laptop.

To compare the Envy 16’s performance to that of the competition, we assembled a mix of other content-creation laptops as well as gaming laptops with midrange RTX GPUs, from the Lenovo Legion 5 Pro with RTX 3070 graphics to the Asus VivoBook Pro 15 and MSI Katana GF76 with RTX 3050 Ti graphics. In between these two bookends are other system with the same RTX 3060 GPU as the Envy 16.

Our first benchmark is PCMark 10, which measures performance on everyday computing work including office productivity tasks, web browsing, and video chats. All of the laptops here are overqualified for running general office apps. The Envy 16 was highly competitive with this very competitive group with a score above 7,000, although we would have guesses that it along with the other Core i9-based laptop in the Acer Predator Triton would have finished first and second and not behind the trio of laptops based on the Core i7-12700H CPU.

Our HandBrake benchmark tests how a laptop is able to handle crushing CPU loads over a lengthy period—in this case, transcoding a 30GB MKV file to a format suitable for Android tablets using HandBrake, the free video encoding utility. The Envy 16 finished in the top half of the chart but was well off the pace set by the other Core i9-based laptops and also behind the Core i7-based Lenovo Legion 5 Pro and the Acer Nitro 5 that features the Ryzen 7 6800H chip.

Next up is Cinebench, another CPU-intensive test but one that renders a complex 2D scene over a short period of time. The Envy 16 also finished near the top of our Cinebench chart. With a result north of 2,000, the Envy 16 is highly qualified for image editing and other media-creation chores.

Although the Envy 16 isn’t geared toward gamers, we ran two of our 3D benchmarks on it to assess its gaming capability. On our Shadow of the Tomb Raider benchmark run at 1920×1080 with the Highest graphics preset, it averaged 97 fps. On the more demanding Metro Exodus at 1920×1080 at the benchmark’s Extreme preset, it managed only 30 fps. Both framerates are in line with what we’ve seen from other RTX 3060-based laptops and indicate the Envy 16 is capable of playing AAA titles as long as the resolution and quality settings are kept in check.

To test a laptop’s battery life, we loop a 4K video using Windows 11’s Movies & TV app, with the laptop set to Airplane mode and earbuds plugged in. We set the screen brightness at a relatively bright 250 nits to 260 nits, which is a good brightness for watching a movie in an office with the lights on. With a large, high-resolution display powered by a high-performance CPU/GPU combo, the Envy 16 has challenges in terms of providing long battery life. HP smartly equipped the system with a large, 83 watt-hour battery that allowed the Envy 16 to last longer than 11 hours on our demanding battery drain test. That’s an impressive result among the large, high-powered laptops assembled here.

Not one to envy

As configured, our loaded HP Envy 16 test system provides ample power for content creators. However, at a price well over $2,000, it begins to feel as though we’ve left HP’s midrange Envy territory and entered the realm of the company’s high-end Spectre line. There isn’t anything about the Envy 16’s look that’s outright objectionable, but the sum total feels a bit disappointing given the price. The chassis is heavy, the low-contrast keyboard is annoying, and the overall plain silver look is a bit boring. Plus, the drop-jaw USB-A port is a pointless inclusion.

While we applaud HP’s wide-ranging configuration options for the Envy 16, we’d still steer creative pros to one of our two favorite content-creation laptops, the Dell XPS 17 or the Asus VivoBook Pro 16X OLED.