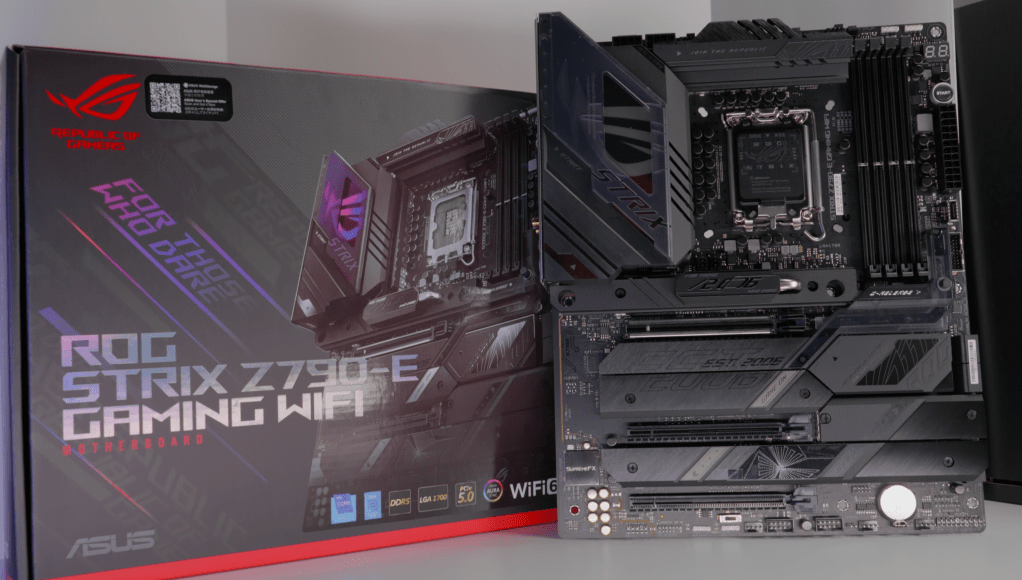 Thiago Trevisan
At a glance

The Asus ROG Strix Z790-E Gaming Wifi is a really solid next-gen motherboard. It comes loaded with all of the best performance features needed with any unnecessary extras. Asus builds their ROG line with gamers in mind and this board is no exception—PCIe Gen 5 and DDR5 included. It strikes a good balance between high-end design and strong performance features for a reasonable price.

With the introduction of Intel’s 13th-generation Raptor Lake, we’ve got some new motherboards to savor. Some of the most finger-lickin’-good options have come from the Asus ROG Strix lineups of the past—packing great features for the price.

Will the new Z790 generation keep up the trend and entice you to indulge? Today we’re looking at the Asus ROG Strix Z790-E. We’ll go over the features, design, and performance. For its $499 MSRP, should this be on the top of your list if you’re upgrading to Intel’s 13th-gen? Let’s find out!

The Asus ROG Strix Z790-E has traditionally been a great entry point into the higher-end motherboard space. ROG, or “Republic of Gamers,” branding tends to signify models with more features and gamer-focused niceties on the design side.

Let’s look at the basic specs, and then we’ll discuss which should matter the most in real-world use cases. Coming in a slightly smaller box than some of the other ROG motherboards, such as the ROG Hero, it still includes some nice accessories: Wi-Fi antenna, ROG stickers, ROG keychain, and other miscellaneous items such as cable ties.

The specs below really cater to the gamer market—some content creators may need to step up to the Hero line if they need faster I/O or more SATA ports.

The hearty spec list above points to the Strix giving gamers exactly what they need—and less of what they don’t. This board is optimized for gaming in its DNA.

PCIe Gen 5 and DDR5 are both here, which can easily keep up with today’s PCIe Gen 4 GPUs, including the mighty Nvidia RTX 4090. The new Z790 chipset has stronger DDR5 RAM support compared to Z690, plus faster maximum speeds, too.

You can install as many as five M.2 drives here—and one of them can even be PCIe Gen 5. While you’ll only get four SATA ports, this no-frills approach is exactly what gamers will likely make more use of.

USB ports are abundant, including a single ultra-fast 20Gb/s 3.2 Gen 2×2. You won’t get Thunderbolt 4 or the faster USB 4 40Gb/s on the back, but Thunderbolt 4 is still available as a header on the motherboard.

Audio connectivity is competent, with the ROG SupremeFX ALC4080 Codec.

Gamers like to build and tinker, and the Strix-E delivers those goodies on the features side too. Clear CMOS for when your overlock goes awry? It’s here. Need to do a BIOS flashback? Yep! Plus, we love the onboard start button for those times when your build isn’t quite ready yet. To top it off, a handy post-code readout is also included in the top right for diagnostics.

There are plenty of “quality of life” features here that gamers will enjoy, too. Do you like swapping out M.2 drives or GPUs often? Asus has their Q-release and Q-latch systems, making these previously arduous tasks much easier. (I’ve lost more M.2 screws than I can count.)

The $499 MSRP ROG Strix-E hits the design cues in precisely the way gamers will appreciate. Robust build quality, plus unique touches—primarily in the clear left cover, make this a winning combination.

Attractive M.2 armor also covers the PCIe area of the motherboard, with interesting details everywhere the eye can see. To keep the cost reasonable, the board doesn’t have a beefy backplate like you’d find on the ROG Hero, but you’ll never see that anyway. What it does have is loads of eye candy and creative graphical touches adorned across the front design—making it a proud addition to your gaming build.

The Q-Code display is both functional and aesthetically interesting—it signifies that this gaming motherboard means business!

The surrounding upper VRM area is beefy and includes some of the aforementioned quirky design elements that the Strix is often known to have.

18+1 power stages is plenty even for the mighty Intel Core-i9 13900K. These new CPUs are pushing out higher power and heat than ever before, so this is certainly an area that must be a priority on a gaming motherboard.

DDR5 RAM also has a more robust implementation over its Z690 predecessor, dual-channel memory capable of overclocking to 7800. The previous Z690 Strix-E typically went to 6400, a nice boost! While you may not be overclocking your RAM that high, Z790 does offer general DDR5 improvements under the radar that will make for better optimization and stability, especially across more than two sticks of RAM. (Z690 typically favored two sticks of RAM only for maximum performance.)

The Asus BIOS and software suite are back, and they’ve been optimized over previous generations. On the software side, Armory Crate is excellent and a jack-of-all-trades. You can set fan profiles, get driver updates, and play with Aura Sync RGB settings. This is great to have under one unified piece of software.

On the BIOS side, the same easy-to-use UEFI BIOS that Asus is well-regarded for, is here. Easily set memory profiles, fan curves, and loads of CPU-tweaking options if you’d like to tinker. Automatic overclocking is also here, which can have varying results based on your cooling solution.

Should you buy the Asus ROG Strix Z790-E?

The Asus ROG Strix Z790-E really hits home for those who want the best performance, but don’t need extraneous features. It has mighty CPU taming VRMs, and a delightfully playful design that enhances the gamer aesthetic.

The $499 MSRP is certainly more than justified with the awesome included “tech upgrades:” You will be on the “next-gen” train here with PCIe Gen 5, DDR5, and support for the latest Intel CPUs.

The Strix-E hits the right balance of “high end” while still packing great features for the dollar. Those users who need more features will be better served by motherboards such as the Asus ROG Z790 Hero, which offer Thunderbolt 4 (and other features that may be attractive to content creators, too.)

Gamers will find nirvana right around this level, however—with all the goodies that you want for a great gaming PC build, without the excess that you won’t use. Plus, it looks very cool, too!