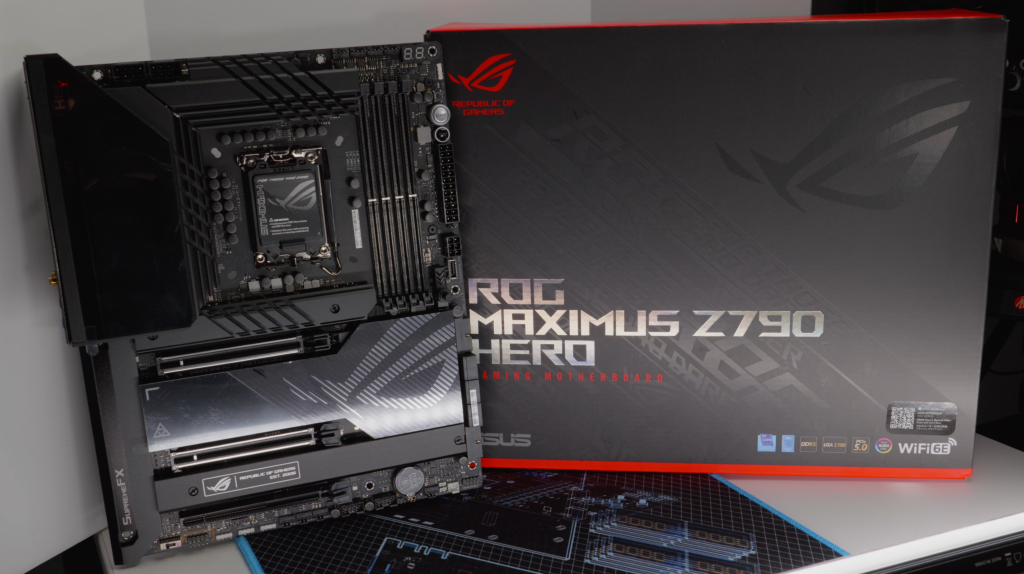 Both gamers and content creators will find a lot to like in the Asus ROG Maximus Z790 Hero. It’s well designed and has all of the next-gen features both parties need, such as PCIe Gen 5, Thunderbolt 4 and USB ports, and plenty of M.2 slots. It lacks 10GbE networking, which you would expect with a premium board like this, but that’s far from a deal breaker. Overall this is a fantastic next-gen motherboard with a relatively affordable price tag that will appeal to a wide audience.

There are many clever ways to riff on this motherboard’s name, but we’ll spare you the puns and metaphors and dive right in to see if this is the “Hero” motherboard that we’ve been looking for. (Okay, we couldn’t resist.)

Perhaps the best candidates to match this heroic offering from Asus are in the form of Intel’s new 13th-generation CPU lineup, such as the i9 13900K. This chip is bursting with fiery performance and power-draw that are superhero-caliber!

The Asus ROG Maximus Hero is up to the task of meeting the i9 13900K where it’s at. This Z790 iteration of the illustrious “Republic of Gamers” (ROG) lineup aspires to be the perfect blend of function and aesthetics.

If the Asus ROG Strix Z790-E is ideal for gamers, the Z790 Hero takes it up a notch—both gamers and content creators will be spoiled by the bevy of extras. We’ll go over the specs, features, design, and performance. Will the extra feature set entice you to choose this board over other options? Let’s find out!

The Asus ROG Maximus Z790 Hero clocks in at an MSRP of $629, which puts it near the mid to upper echelon of motherboards. (Still shy of the more expensive behemoths such as the Asus ROG Extreme we reviewed for Z690)

Let’s take a gander at the basic specs below, and what you’re getting for the price. We’ll subsequently discuss the most consequential.

You’ll be able to use both Intel’s 12th- and 13th-gen CPUs with Z790, along with your existing CPU coolers.

The box is bigger than most standard motherboards, including a few neat included extras that denote the Z790 Hero’s premium pedigree. Of note is the Asus M.2 Hyper PCIe card, allowing you to add two additional M.2 drives, one being capable of PCIe Gen 5. Other included accessories range from the driver USB drive and ROG stickers, to extra cooling hardware for adding small fans.

The Hero adds a host of features that go beyond purely gaming necessities and appeal to content creators, too.

The Z790 Hero, much like the ROG Strix, has everything you’d ever want for a sweet gaming build. Where the Hero really starts to shine is in its extra features, which round it out for content creators too.

Z790 continues the next-gen upgrades introduced with Z690, such as DDR5 and PCIe Gen 5. While current GPUs such as the RTX 4090 are still only PCIe Gen 4, you’ll have tons of future-proofing here.

On the Hero, you’ll get two PCIe 16x PCIe slots, which both offer the awesome Q-Release button. If you’ve ever tried to remove your GPU out of a tight PC build, you’ll know how valuable these quick-release buttons are allowing for easier access!

USB ports are plenty here, and you’ll get one that’s the newer 20Gb/s 3.2 Gen 2×2 too. Of interest to workstation users and content creators is the inclusion of two Thunderbolt 4 ports, with speeds up to 40Gb/s. Thunderbolt has a large ecosystem of supported accessories, from speedy external drives to even external GPUs, something content creators can appreciate.

M.2 options are interesting here: three onboard PCIe Gen 4 slots supplemented by the PCIe Asus Hyper M.2 card for two additional slots. Some motherboards will provide more slots onboard, but at the expense of PCIe lane compromises. At least here you have the option to add them with some easier access. Of benefit to the onboard slots, is the Q-Latch system, making toolless installation possible. This is a great innovation since those tiny M.2 screws are often difficult to work with!

You’ll still get six SATA ports for those who need it, which exceeds the four SATA ports found on lower-tier motherboards recently.

Audio connectivity is nicely represented, with the ROG SupremeFX ALC4082 Codec and audio outputs on the back, including digital.

Networking options are fine, with Intel’s 2.5GbE and 6E Wi-Fi. We’d like to see 10GbE offered on this level of motherboard, like what is available on the Asus ROG Extreme, however.

The useful overclocking features are here too, of course. A handy start button on the motherboard itself comes in clutch when you’re on a test bench, or simply testing your new PC build. Clear CMOS and BIOS Flashback are also present—staples of premium overclocking motherboards.

The $629 MSRP ROG Maximus Z790 Hero feels solidly built, and substantial in the hands. Part of that is thanks to the impressively robust backplate—with a tastefully done Asus ROG logo. This accentuates the premium feel of the Z790 Hero in both visual and tactile quality.

The impressive design continues on the front with just the right amount of RGB touches to make it appealing. You’ll get a beautiful display on the I/O upper-left area of the motherboard, customizable in the Asus Armoury Crate software. Asus calls this “Polymo Lighting.” We like to call it “cool shiny lights,” since it’s a colorful display of eye candy!

The M.2 and PCIe area has functional and attractive styling, with the Asus ROG logo once again prominent. Reflective surfaces abound, although when in use, they’re often hidden by the GPU and bright RGB effects.

Rounding out the rest of the design, you’ll have the imposing VRM heatsink letting you know this motherboard is ready for action! Careful with those fingers; this is high grade stuff!

Asus calls the 20+1 power stages its “Teamed Power Stage Design” because of the use of “Phase Doublers.” This ensures maximum performance while keeping voltages and thermals in check. Strapping Intel’s i9 13900K to this, even overclocked? No worries, these VRMs will easily handle the scorching monster without breaking a sweat!

While the Z690 Hero also has the chops to handle the latest CPUs, the Z790 has a few added performance benefits. When it comes to DDR5, Z790 has improved stability and higher overlocking limits for the fastest RAM kits. Asus says it’s due to improved signal routing—so you’re welcome, overclockers. Go have fun! (Non-overclockers will also benefit from added stability and better compatibility with 4 -DIMM RAM configurations on the Z790, too).

The Asus BIOS has been renowned for ease of use and support for deep tinkering for those who want it. Sure, easy automatic XMP profiles and Ai overclocking are here, too. If you want to change RAM timings, or adjust minute details on a CPU overclock, you’ll be like a kid in a toy store here.

If you prefer to keep your mad-scientist role-playing out of the BIOS, Asus Armoury Crate software is here for that. Easily adjust fan curves, and Aura Sync RGB options aplenty. It can automatically check for driver updates, although we always recommended occasional checking of the Asus website—sometimes BIOS updates and the like are released faster there if you need to update. Otherwise, the software has great visual appeal and is generally easy to use.

Should you buy the Asus ROG Maximus Z790 Hero?

The Asus ROG Maximus Z90 Hero is a delightful motherboard that bridges the gap between gamers and content creators. For gamers wanting premium build quality, chock-full of options, you can’t go wrong. It’s going to look great in your build with its tasteful RGB, too. At $629, it’s more expensive than previous-generation Hero offerings, but it’s also packing the latest and greatest technologies, which aren’t cheap to implement.

For content creators and those wanting to use the board as a workstation, there’s a lot to like here, too. Thunderbolt 4, plenty of USB, and five slots for M.2 drives with the included Asus Hyper PCIe card, for example. Six SATA ports will give you even more storage options, too. If you don’t need 10GbE networking, there is little else that you will need.

If you want a high-end, premium-feeling motherboard, without having to shell out the dough for the uber-class options, the Z790 Hero makes for an excellent choice with little compromise.