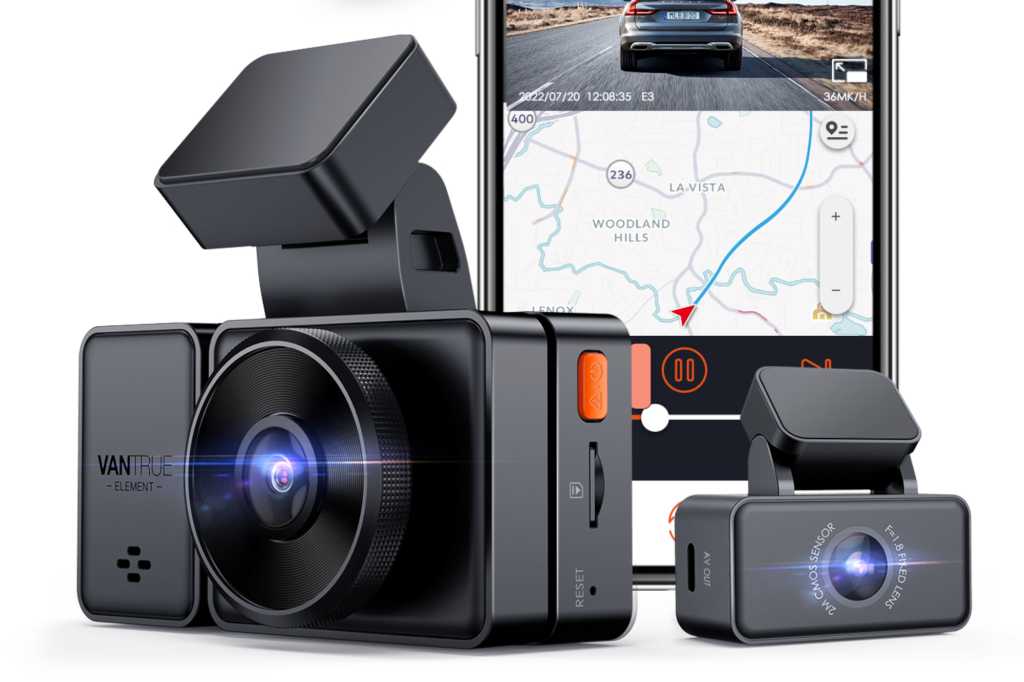 Vantrue is back on form with this affordable (relatively) three-camera (front, interior, rear) system. The video from all three cameras is very good in both bright and low-light situations. It also features GPS, voice control, and phone connectivity. Good stuff.

My last look at a Vantrue dash cam was the Element 1 (E1), a clever, compact design with weak video captures. Day captures were passable, but important details in night captures such as license plate numbers were nearly impossible to discern. To optimize the image required either adding or removing a polarizing filter.

That was then; the three-channel Element 3 (E3) is now, and it’s a different animal entirely, producing very good captures day and night from all three of its cameras. Good on the company for the polished comeback.

Of course, the E3 is also twice the price at $300, but in performance and features, it’s competitive with the top-ranked Cobra SC 400D, which costs $100 more. The E1 wasn’t competitive with a whole lot when it came to video.

Note: This review is part of our ongoing roundup of the best dash cams. Go there to learn about competing products, what to look for in a dash cam, and buying recommendations.

The Element 3, as the name hints at, is a three-channel system featuring 160-degree field-of-view 1440p front captures, plus 165-degree FOV/1080p interior and 160-degree FOV rear captures. All at 30 frames per second. There’s also a 2560x1994p mode for the front camera, though the uptick in detail is mild.

The front and interior cameras are housed in the same single body, while the rear camera attaches to the back window and is connected via a cable. All connections are Type-C. Nice.

However, this brings me to the one issue I had with the Element 3—the cable that connects the rear camera to the main body uses straight rather than right-angled Type-C connectors.

The cable being thick makes it somewhat difficult to bend and the straight connections stick out in ungainly fashion. This made hiding the cable difficult on the rear window, and negatively affected my ability to place the front camera where I wanted it. Hardly a deal breaker, but puzzling on such an otherwise clever design.

Note that there are angled Type-C adapters available on Amazon for less than $10. Not that that excuses Vantrue.

Vantrue might’ve mitigated the effect on front placement if you could connect the rear camera to the semi-adhesive mount, but that only supports the Type-C power cable, which, ironically, is angled! If you forego the rear camera, you can connect the angled power cable to the main body. Then again, buy a cheaper front/interior camera is that’s what you want.

While the semi-adhesive mount of the front/interior unit is adjustable only vertically, the front camera’s lens body can be tilted both vertically and horizontally—a clever trick I haven’t seen before. It will also accept the optional $20 polarizing filter. The rear camera also uses a sticky mount.

The Element 3 opts for physical multi-function buttons on the bottom of the main body rather than a touch display for navigating features and setting things up. Said setup was relatively easy and you’re walked through the process when you first power on the camera. The provided display, while not touch, is a very crisp and colorful 2.5-inch IPS unit with wide viewing angles.

Vantrue includes a Bluetooth remote “emergency” button that can be mounted in a convenient location so you don’t have to reach up to the camera to save a snapshot or the current video.

Of course, everything must connect to your phone these days and the E3 does that. I wax cynically, but the app is very handy, allowing you to offload videos and interact with the embedded GPS info to see exactly where you’ve been. Note that the E3 and phone communicate via Wi-Fi so your phone will lose its Wi-Fi internet.

Having been singularly unimpressed with the Vantrue Element 1’s video (especially at night), it was nice to see the company back on its game with the Element 3. The video captures from all three cameras were excellent during the day. Of course the 1440p front was more detailed than the 1080 interior and rear captures, but all still showed good detail, color and motion compensation.

I’m paying special attention to the latter these days after my recent experience with the Garmin DriveCam 76 and its shot-through-jello wobbling issues. (Once a hallmark of older GoPro technology.) The Element 3’s capture quality isn’t quite the best I’ve seen, but it keeps the horizon steady.

As with the Element 1, I found the front captures slightly over-exposed at the default setting. This can be ameliorated in the settings section. All the captures shown below were taken at the default exposure settings.

You might notice an extremely faint horizontal line through the rear captures (the first is directly below). It’s a heater wire, not a defect in the camera. It’s what happens when you install without measuring. Regardless, you can see that the general quality from the rear camera is quite good.

I did have to reduce the g-sensor sensitivity to stop the camera from saving everything in the “Event” folder. But that’s not unusual for my car with its stiff street/track suspension (Ohlins, if you must know).

The Element 3’s biggest area of improvement over the Element 1 is the night captures shown below. They were A-OK all around—i.e., from all three cameras. This is, again, without the polarizing filter.

Above is the front nighttime capture, which shows far more detail with the Element 1. Below, you can see that the nighttime interior shots are also great thanks to the infrared lighting.

You can even discern detail out the rear window using the interior camera, and there’s none of the blow-out from the infrared that you see with some cheaper units.

The rear captures at night are more than passable, as well. Note that my window wasn’t pristinely clean and there’s still the blurry line in the middle from the heater wire. Sorry, I was finished testing by the time I discovered it. Don’t make the same mistake with placement if you want perfect captures.

One small issue with the E3 was super sensitive/aggressive power cycling. Merely turning the ignition key from interior power-on to crank-the-starter position caused the camera to shut down and restart. Not a huge deal, but a tad annoying and it takes 10 seconds or so before you’re recording again.

If you haven’t read our “What to look for” section in our Best dash cams roundup, a super capacitor such as that in the E3 will last many more charge cycles and function better in the cold, but rarely keep the camera powered on for longer than it takes to save files. Batteries allow the camera to stay on longer in case the 12-volt is killed in in incident, but eventually wears out and doesn’t perform well under really cold conditions.

Should you buy the Vantrue Element 3?

The Element 3 proves Vantrue back on point in terms of video captures and design—the adjustable lens body is a particularly clever feature. If it weren’t for the ungainly rear camera cable and slightly over-zealous default exposure setting on the front camera, I’d have no complaints at all. Still, it’s a worthy bargain of a three-channel system.