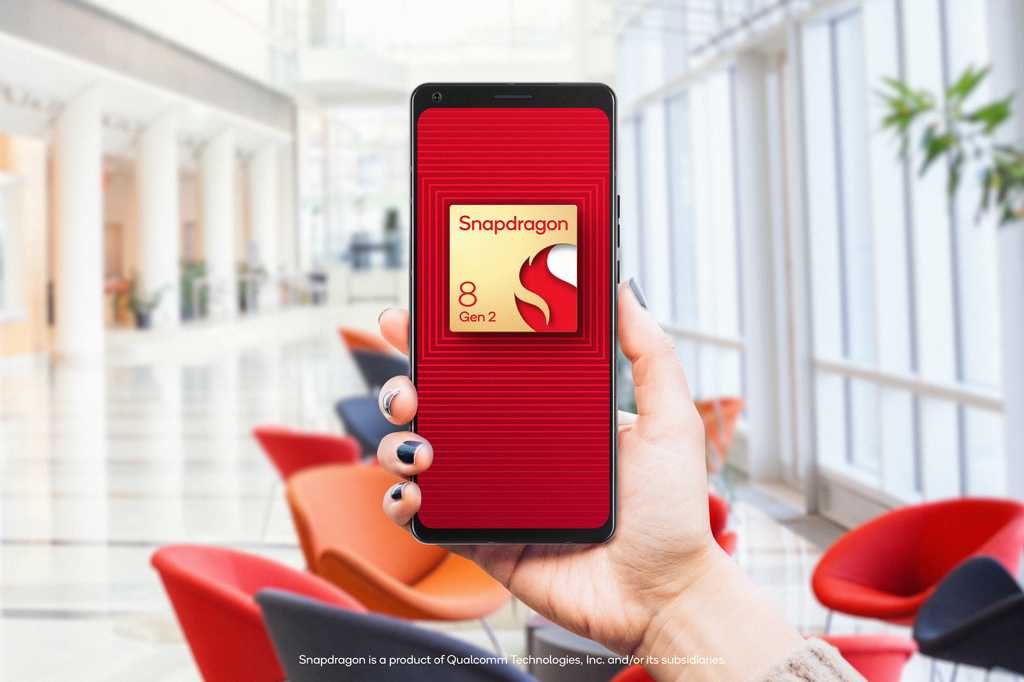 With AI capabilities — and not just compute power — becoming key features of smartphones and even PCs, Qualcomm’s new Snapdragon 8 Gen 2 smartphone chip leans heavily on how AI can improve photos and your other mobile experiences, executives said. Key additions include real-time hardware ray tracing, the ability to sense and optimize different “layers” in your photos, and massive connectivity upgrades whose throughput will likely outpace your home Internet connection.

Specifically, AI will be used to power a number of new experiences in Snapdragon-powered phones, which will debut this fall. Smarter cameras will try to interpret what you’re shooting and enhance it before you even take the picture, not afterwards, executives said. What Qualcomm now calls an “always sensing” camera will also remain in low-power mode, scanning the world around it; you’ll be able to hold up the phone to scan an QR code even if the phone is in standby mode, they said. The phone will also use its AI capabilities to improve cellular connections, as previous phones have done.

So far, Qualcomm hasn’t said much about the Snapdragon 8 Gen 2 Arm chip, though the company promises more details will be added during its Snapdragon Technology Summit, going on now in Maui, Hawaii. Qualcomm launched the Snapdragon 8 Gen 1 last year, and the capabilities of the chip, as well as its name, imply an upgrade rather than a generational refresh.

From an overall performance perspective, Qualcomm claims that the Hexagon DSP, which powers its “Snapdragon Smart” features, will be 4.35 times faster than the Gen 1 chip. Its integrated Kryo CPU cores will be 35 percent faster (and offer 40 percent more power efficiency) while its Adreno GPU will offer up to 25 percent faster performance.

But it’s fair to say that the Snapdragon 8 Gen 2 will likely power your next Android smartphone. Qualcomm has relationships with most smartphone suppliers, including Samsung, though the latter was not in a list of names of companies expected to use the new platform. Qualcomm’s Snapdragon 8 Gen 2 partners include Asus Republic of Gamers (ROG), Honor, iQoo, Motorola, Nubia, OnePlus, Oppo, Redmagic, Redmi, SHARP, Sony, vivo, Xiaomi, Xingji/Meizu, and ZTE, the company said.

Qualcomm’s Snapdragon 8 Gen 2: what’s in it?

The design of the Snapdragon 8 Gen 2 slightly differs from Gen 1. Qualcomm didn’t break down the details of the individual cores, but executives told reporters that there will be a single 3.19GHz “prime” core, the Arm Cortex-X3, and four performance cores, running at 2.8GHz. Cisco Cheng, the senior director of product marketing for Qualcomm, said that the four performance cores — which have been rumored to be the Cortex-A715 — are made up of “two distinct architectures” that can support both 32-bit and 64-bit applications. Another key difference is that there are only three “efficiency” cores, rather than four, which are designed for low-power, background tasks.

Rival MediaTek, which is vying to push Qualcomm out of premium smartphones, disclosed its own Dimensity 9200 chip earlier this month. It too, is based on Arm, and its performance core runs slightly slower at 3.05GHz.

Most smartphone chips share some commonalities between PC processors, namely the inclusion of a CPU or compute core, graphics, and wireless I/O. To underscore the point that AI is a key driver of the chip, however, Qualcomm disclosed that it has included what it calls a “Hexagon direct link,” which basically can use the Hexagon core to inject AI into the chip’s other capabilities.

Snapdragon chips already include a Sensing Hub, which controls everything from sensors that detect your presence and gaze, gestures, ultrasound and more. Cheng said that the Sensing Hub’s AI capabilities have been doubled again, with a second AI core, also providing 50 percent more memory for processing more information.

It’s the camera, though, where AI is typically applied, and where you’ll see the most benefit from AI. With the Snapdragon 8 Gen 2, the camera’s “cognitive” image signal processor (or ISP) will run what Qualcomm calls a “realtime segmentation filter,” where it will try and interpret the various “segments” of what the camera is seeing. What this will mean, executives said, is that the camera will try to put a photo of a nature scene in its best light as you’re previewing it with the camera, understanding the part of the photo that’s the “sky,” the part that might be “grass” or a “face,” and so on.

“It’s trained to understand facial landmarks like face, eyes, and glasses,” Cheng said. “It can understand the background and then take these layers and adjust it in real time so that you get these compelling images. This is essentially precise Photoshop edits, in real time.”

Otherwise, smartphone cameras powered by the Snapdragon 8 Gen 2 will be capable of capturing up to 108 megapixels from a single camera at 30fps, or up to 36Mpixels from all three cameras. Video capture capabilities will include 8K HDR at 30 fps, and slow-mo 720p video capture at 120 fps.

The Snapdragon 8 Gen 2 also applies AI to the wireless connection, including to extend the wireless range and signal strength. Inside the Snapdragon 8 Gen 2 will be the new X70 5G modem. This is the first Snapdragon phone platform that can support 4X carrier aggregation or even use a pair of 5G SIM cards simultaneously — useful if you’re traveling in Taiwan with a dual-SIM phone. In that case, you’d be able to receive a 5G call from a relative while using a second, local SIM to surf the Web using that data plan.

Qualcomm’s FastConnect Wi-Fi block will support Wi-Fi 7, including what it calls “simultaneous high band multi-link” — a smart connectivity solution where your phone will link multiple high-bandwidth channels together, offering up to a whopping 5.8Gpbs (if a nearby Wi-Fi router supports it, of course). Cheng said that using the multiple lanes will also reduce latency to as little as 2ms, ideal for cloud gaming.

While the number of people playing games on mobile phones reaches into the multiple billions, the number of users playing mobile 3D games, or first-person shooters, is somewhat smaller but still sizeable: the mobile version of Player Unknown: Battlegrounds (PUBG) tops 1 billion downloads. (Analyst firm Newzoo says that mobile game revenue will drop by 6 percent this year, however.) That’s enough to justify the latest addition to the Snapdragon arsenal: real-time hardware ray tracing. Qualcomm will announce support from several game publishers to build in support for its features, which will include ambient occlusion, reflections, and soft shadows.

The integrated Adreno GPU features both increased performance and power savings of 25 percent, Cheng said. Games that use the Vulcan API (specifically version 1.3), should see a 30 percent performance boost, he said. Cheng said that the graphics upgrades would be paired with dynamic spatial audio, also a first for the Snapdragon platform.

The Adreno chip will also add support for HDR Vivid, a Chinese HDR standard, as well as a technique called OLED aging compensation to prevent burn-in. Snapdragon phones using the new chip will be able to display 4K at 60Hz, or 1440p at 144Hz, the company said.

Qualcomm isn’t expected to announce a Snapdragon 7 chip for cheaper smartphones at its Technology Summit, however. Qualcomm typically releases a “Plus” variant for gaming phones in a few months time.