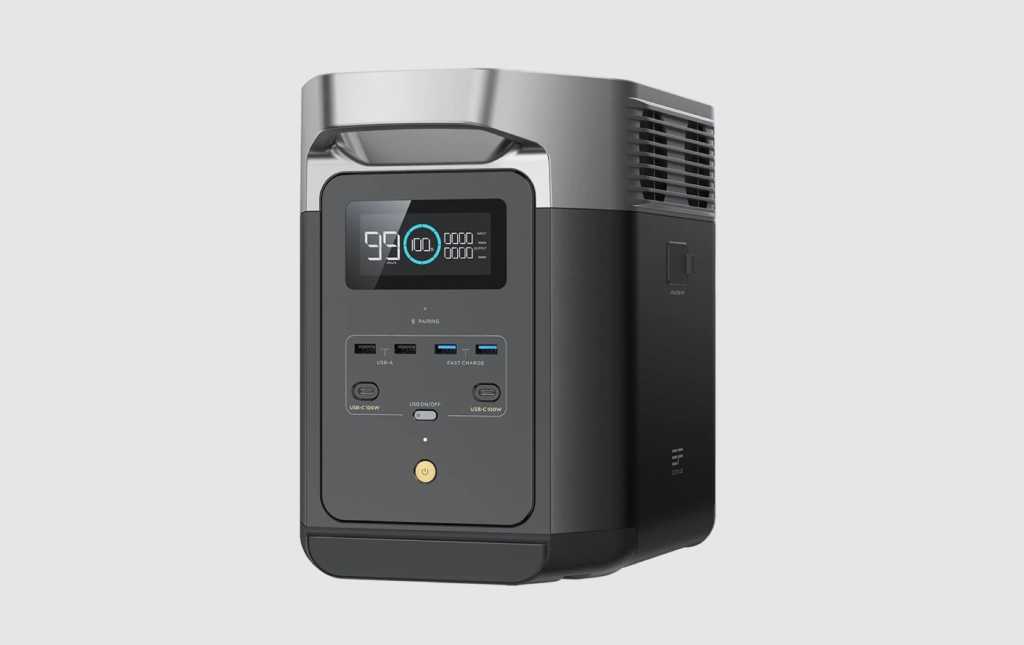 EcoFlow has long been recognized as one of the most technically advanced power station brands around, with one key weakness: battery chemistry. With the Delta 2, EcoFlow addresses that by moving to lithium iron phosphate cells, which more than triples the duty cycle of the battery.

That’s likely to ease the minds of consumers who expect to heavily use their power stations.

To be honest, arguments over battery chemistry might be a little overstated. With the original 1,000WHr Delta, for example, it would take 800 full discharge cycles before the battery’s capacity would drop to 80 percent. That’s similar to what you would see in a laptop or phone, which you would actually charge and discharge daily or every other day.

But most people are unlikely to give a portable power station that kind of a workout unless you’re permanently off the grid. Realistically, it’ll sit around until it’s used for a camping trip or occasional power outages.

But going from 800 charge cycles to 3,000 thanks to the lithium iron phosphate chemistry is understandably very attractive to many people. In fact, with that many charges cycles, you might even consider using it as an ad-hoc UPS for your PC, keeping it plugged in full time.

In truth, that would work with a laptop, but probably not a desktop. That’s because the Delta 2 takes 30 milliseconds to take over once power has been cut. On most desktops following the ATX specification, a PSU can go 16ms before power is lost to the system. The 30ms is simply too slow for most desktop PCs to not immediately reboot with the Delta 2.

This doesn’t impact laptops, which have a battery to rely on while power is switched over. Similarly, fans, refrigerators, and most other household equipment doesn’t mind losing power for a fraction of a second. There’s no concern about losing data.

The Delta 2 doesn’t change much externally from the original model, with handles on both ends that are strong enough to lug around the 27 pound power station one-handed if you need to. EcoFlow has moved the AC and solar charging ports from the side of the unit to the back on the Delta 2. The solar ports continue to be based on the fairly common XT60 connector so you can connect aftermarket solar panels to it if you want. If you go this route, pay careful attention that the voltage of your solar panels remains below the Delta 2’s limit of 500 watts. Or stick with an EcoFlow-branded setup to be sure.

We tested the Delta 2 with the company’s 220-watt bifacial panels and could push 140 watts to 150 watts from a low-angle fall sun. That was enough to offset our refrigerator’s power consumption of 172 watts, and yes, you can charge the Delta 2 while using it.

Charging over solar is great, but cloudy days can make charging very tedious and nerve wracking if you’re worried you won’t have time to recharge before the sun sets. If you’re in a pinch during a power outage and can’t wait hours and hours to charge the station via solar panel, the Delta 2 has impressive AC charge rates if you can get it to a working outlet.

Plugged into AC, the Delta 2 can charge at up to 1,200 watts, which lets you take it from zero to 100 percent in about an an hour and 20 minutes. The Delta 2’s aggressive charge input doesn’t run at 1,200 watts the entire time—like most laptops and phones, it eases back as it approaches full power to preserve battery longevity.

The XT60 port can also be used for DC charging in your car (that cable is included). You also get a cigarette car lighter and two 5.5mm “barrel” ports. The cigarette charge is rated at 12.6 volts and 10 amps, or 128 watts, while the two barrel charger ports can hit 38 watts a piece at 12.6 volts. You should know that 12.6 volts over the car charger is fine, but some devices may want the full 13.6 to 14 volts a typical car alternator provides to operate. If your device needs that much voltage, the Delta 2’s DC-out may not work for it.

The Delta’s front features four USB-A ports, and two USB-C ports. We checked the USB-C ports, which report they support USB 3.0 Power Delivery charging at 5 volts, 9 volts, 12 volts, 15 volts, and 20 volts, all at 5 amps. That means both ports can charge a USB-C laptop at up to 100 watts without issue.

Two of the USB-A ports are the standard 5 watt, while the two blue ports on the right support more advanced charging rates using QuickCharge 2.0 and 3.0 up to 12 volts, as well as Samsung’s AFC up to 9 volts, and Huawei’s FCP up to 9 volts or 18 watts.

The backside of the Delta 2 features six AC plugs, four are two-prong rated for the standard 15-amp output of a most American homes. The last two plugs are three-prong and rated for 20 amps. The AC output is rated at 1,800 watts total with a momentary surge rating of 2,700 watts. Turn on the Delta 2’s X-Boost mode and it can push 2,200 watts for an extended period of time. EcoFlow says X-Boost is best suited for devices that don’t need exact voltage such as a heater or power tools, and also says you should have only one port for those times. We’d recommend, for example, that you not run a rack of desktop PCs in X-Boost mode due to the lowered voltage EcoFlow uses to reach the sustained higher 2,200 watts.

We’ve seen reports from early reviews of the pure sine wave on the Delta 2 being a little less than pure under heavy loads but looking at the output under a 1,600 watt load, all appeared fine.

For capacity testing, we fully discharged the Delta 2 twice to condition the battery and then charged it to 100 percent for run-down tests. For that we plugged a watt meter into the AC port and measured the energy output using a 200-watt incandescent light bulb and a small space heater drawing 800 watts. Results for both the 200-watt bulb runs reached 80 percent of the Delta 2’s 1,024Wh-rated capacity. Since the output rates can be different whether you’re discharging over AC or DC, we also ran the Delta 2 down over its USB-C port with load set to 20 volts at 3 amps or 60 watts. That’s the typical maximum charge rate for a small laptop if it were dead. Under actual use, most small laptops can use from 5 watts to 30 watts. The DC output was 828 watt hours, or basically 80 percent of its rated 1,024 capacity.

Under heavier loads of 800 watts, we saw the capacity drop to 71 percent, however. The lower capacity may be due to the efficiency of the inverter under higher loads, how the battery discharges under a much heavier load as well, and additional power use by the Delta 2 such as its loud fans. We’ll get to the fan noise discussion below.

With an 81 percent capacity, that means the Delta 2 gives you an actual effective capacity closer to roughly 821 watt hours—not 1,024 watt hours. That’s only slightly behind the 84 percent efficiency of competing brands.

We can’t review the Delta 2 without mentioning one of the things that bugs us the most about it: the fan noise. Under high charge rates and high discharge rates, the Delta 2’s two fans spin at very high RPM, which we measured at 57dBA three feet from the unit when the fans were on. Even worse, it’s a small-fan, shrill 57dBA. When charging at the unit’s maximum 1,200 watts, the fans kick on at full speed. It does ramp down at lower charge rates, but even on its lowest setting of 200 watts, it will run the fans and hit about 50dBA.

Perhaps more annoying than fan noise during charging though is the fan noise during discharge or use. Power stations are supposed to be silent, but when running the Delta 2 at anything above 900 watts, the fans are at full speed. That means, if you’re running the coffee maker on battery, prepare for some fan noise while you’re at it. It’s probably as annoying as some inverter-based gas generators.

At lower discharge rates, it’s actually not that bad and running a 1990s-era refrigerator, which uses about 172 watts, you can barely hear the Delta 2 over the fridge’s own noise.

We can actually somewhat excuse the Delta 2 (and any power station’s) fan noise on heavy loads, as keeping the inverter and batteries cool is important for longevity and safety.

What bugs us is the fans triggering at anything above 120 watts. If you hoped to power medical equipment in your bedroom and it uses more than 120 watts, you’ll have to listen to fans or run an extension cable out of the room.

The good news is, EcoFlow officials tell us they plan to address the fan noise in an upcoming firmware update to the unit. The company has done so for other models after the initial release, so here’s hoping it will improve.

Speaking of firmware updates, we actually had to install two firmware updates to the unit out of the box, which we think is a good sign. It tells us the company is actively supporting the product rather than never, ever issuing updates.

The Delta 2 now adds support from Android and iOS devices, which the original lacked. The Delta 2 can connect to your Wi-Fi network for monitoring remotely via the internet, or if no Wi-Fi is available, you can directly connect your phone or tablet to the Delta 2 using Wi-Fi Direct. It worked fine for us, but a Bluetooth option in addition to Wi-Fi would be even sweeter, as you wouldn’t have to fiddle with the connection without internet. EcoFlow requires a login, which will annoy some. We’ve also read reports that you have to connect the app to the internet occasionally, which will be irksome to someone truly off the grid.

In our experience, the EcoFlow app has generally been very reliable and intuitive to use. We did experience some bad calculations as it was trying to figure out real-time run-time estimates but that’s to be expected. Real-time predictions on how many “hours” of battery life are inherently as unreliable as your car trying to tell you how many miles per gallon are left not knowing you’re about to drive up a bit mountain.

Perhaps one of the coolest features of the Delta 2 over the older model is the addition of its Extra Battery Port on the right side of the unit. This lets you connect the functional but unimaginatively named Delta 2 Extra Battery to add 1,024Wh of capacity—it’s basically another Delta 2 unit without the AC and DC ports and ups, the total capacity to 2KWh.The even larger 2KWh Delta Max Extra Battery let’s the Delta 2 reach 3KHw.

What we really appreciate about the modular approach versus one big power station is the weight. Each can be transported separately, and can stack nicely.

Although we didn’t review it, EcoFlow also makes a “smart” gas-powered inverter generator that plugs into the same port.

Should you buy the EcoFlow Delta 2?

Overall, the Delta 2 gives you class-leading charge rates over AC, decent efficiency, and the ability to easily expand capacity. Moving to lithium iron phosphate is the icing on the cake though, providing much, much longer duty cycles. The 5-year warranty is also a bonus. Our only real ding is the fan noise, but hopefully that will get addressed in an update. At its competitive price of $999 (currently $899 on Amazon), the Delta 2 ranks as one of our top picks for a fairly priced, powerful, advanced power station with tons of expansion.