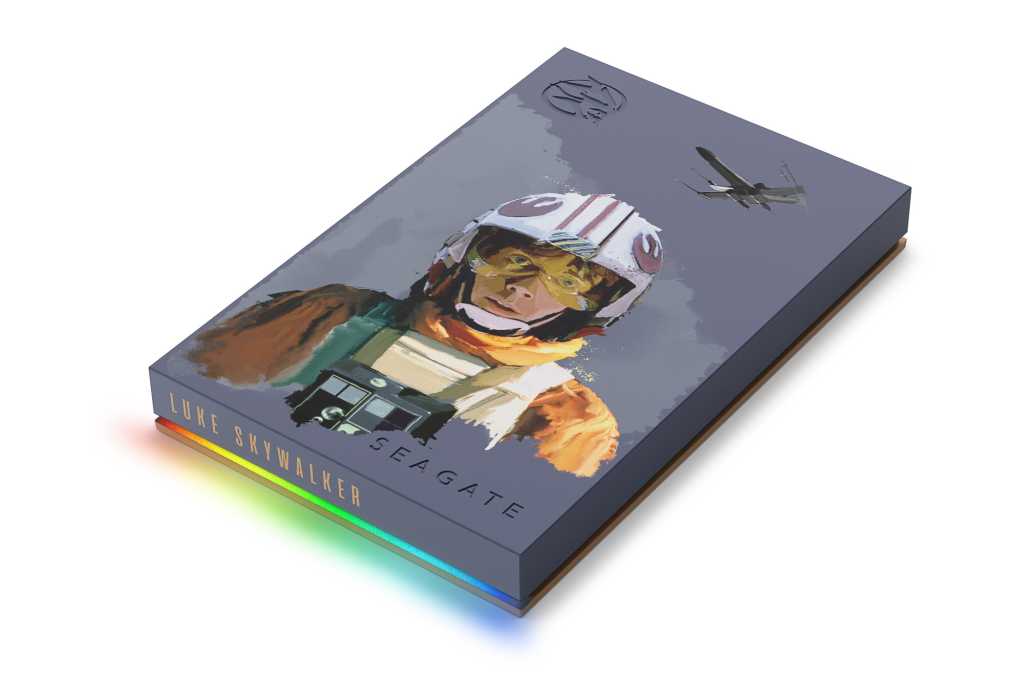 Image: Seagate
At a glance

This old-school Star Wars-themed external 2.5-inch, USB (5Gbps) hard drive delivers good performance at a decent price per gigabyte. You can have more capacity for less, but without the fun graphics and configurable RGB lighting.

Apparently, Star Wars sells (or pays) well—the latest drives we’ve seen from Seagate have nearly all been themed to that fantasy universe. However, after Mandalorian Beskar, the company has reverted to old-school Star Wars with images of Luke Skywalker, Darth Vader, and Han Solo adorning the company’s latest special edition hard drives.

Why the originals rather than Rey and Kylo? Don’t know. But one might guess it’s based on which merch sells better. 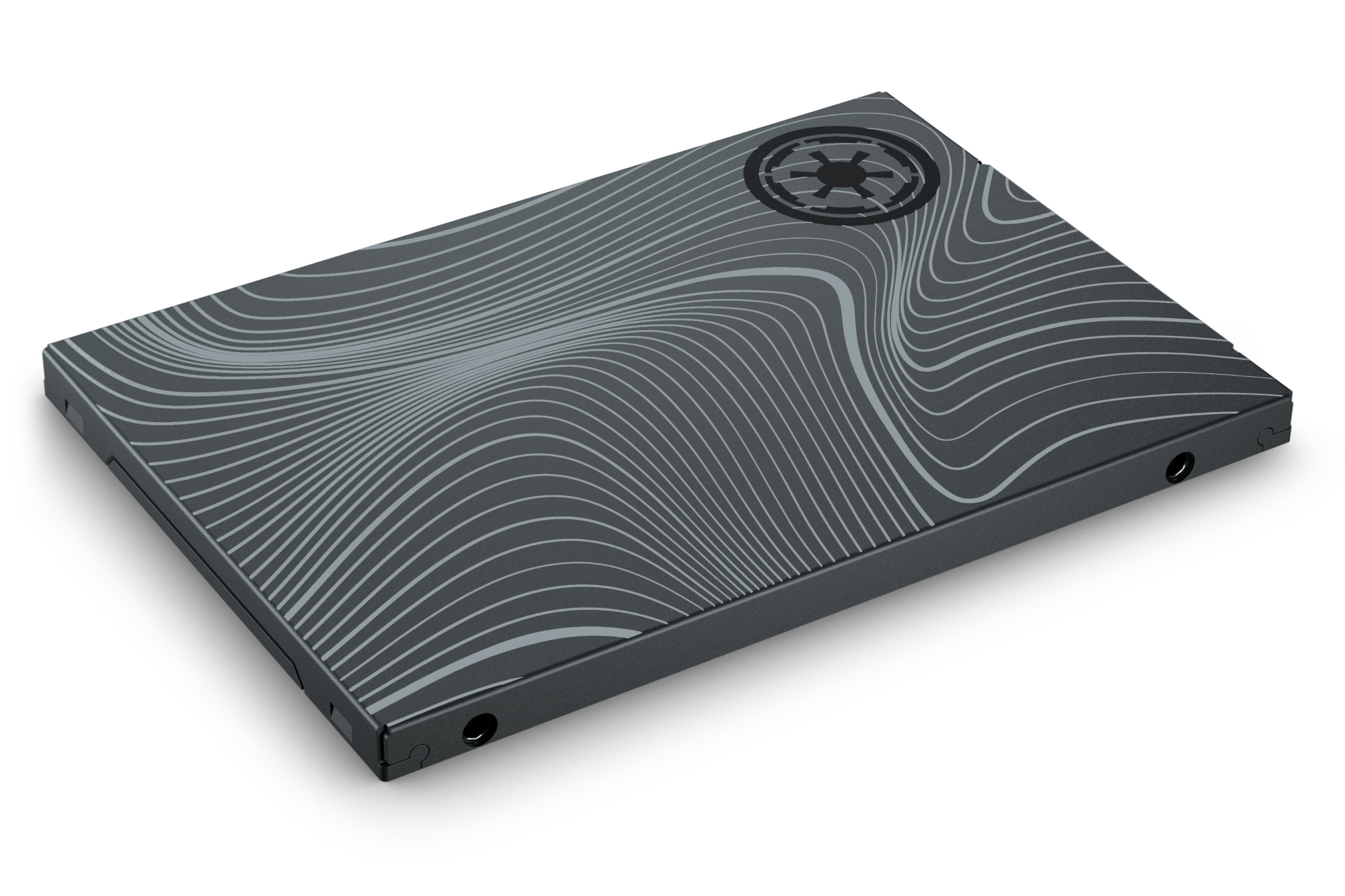 To that end, these are the characters in their ’70s/’80s prime, not the grizzled versions from the latest trilogy. Luke Skywalker on the 2TB drive that Seagate sent us is the brash, optimistic, soon-to-be Jedi in his X-Wing flight suit, not the green-milk swilling cynic that Disney corp put out there.

Note: This review is part of our ongoing roundup of the best external drives. Go there to learn about competing products, what to look for in an external drive, and buying recommendations.

The $110 MSRP, 2TB Luke Skywalker special edition is largely your standard 2.5-inch, 7,200rpm external HDD. It follows Seagate’s recent styling habit of squaring off the corners on its storage products. This makes for a striking form factor, but also produces sharp edges that might catch on shirt pockets, backpack linings, etc. Still, I’ll take it, snags or not.

As noted, the top of the drive I tested features a rendering of the original optimistic SW hero in his orange flight suit and helmet on a medium gray background. It’s a suitably artistic and nostalgic rendering that I quite like. I’m less impressed with the separate bottom surface, which is tan and sports a Lucas Film logo, and doesn’t seem in keeping with the theme. The top and bottom sections create a sandwich for the RGB lighting.

Said RGB lighting is something I rather enjoy about Seagate’s storage products. Not so much for the rainbow pattern or FX (breathe, spectrum, blink, slide, etc.), which are entertaining enough, but because I can color code the light according to the content the drive holds. Of course, you can label your drives for easy ID, but where’s the fun in that?

You’ll need to download the Seagate Toolkit to control the lighting. Toolkit sits in the system tray for easy access and performs a number of other functions as well. You can see the relevant RGB settings in the screen capture shown below.

I must admit, while the SWTOT (Star Wars The Original Trilogy) drive is a retro homage, I was still surprised that Seagate opted for an old-school powered micro-B USB port on the drive. Seagate include the appropriate cable, but orientation-agnostic Type-C would’ve been a nice touch. I suppose Seagate has lots of the older connections still on hand—waste not, want not.

It’s also a bit odd that these special edition drives are only available in 2TB capacities. I’d posit a similar explanation about stock on hand, but then I might be labeled a conspiracy theorist.

There’s not a lot more to external hard drives beyond the ports and lights, but the unit measures 0.57-inches thick, by 3.15-inches wide, by 4.82-inches long and weighs roughly six ounces. Not burdensome in the least for a backpack, but a bit large for shirt pockets.

The drive is warrantied for a year and Seagate includes a free year of data recovery. I’ve never had a hard drive fail within that window that didn’t fail immediately, but hey, it’s at least a hedge against major defects.

Being a 2.5-inch hard drive, the Skywalker is hardly an X-Wing in terms of performance. Think of it as more of a land speeder—strictly limited in speed compared to the greatest technology (SSDs.)

That said, 119/120MBps reading and writing is on par with any single 2.5-inch external USB 3.0 5Gbps hard drive. It’s also easily fast enough for delivering movies, and most games—as sexy as SSD speeds are, they’re also extremely overkill for many tasks.

Note that the throughput of smaller HDDs has not increased as it has with larger 3.5-inch units, the fastest of which can reach 250MBps. Read seeks as calculated by AS SSD were very fast for a hard drive, at around .25 milliseconds; however, for some bizarre reason, write seeks were 255ms. That’s slower than anything we’ve ever seen—by a lot.

That stupendously slow write access time might be another instance of the phenomena that caused CrystalDiskMark 7 and 8 to misfire on the Skywalker HDD (which is really just a FireCuda HDD in a fancy wrapper). After 45 minutes into both those synthetic benchmarks, the first test still had not completed, so I went back to version 6 to get the results you see above. Seagate has not gotten back to me with comment or an explanation of these oddities as of the original publish date of this article.

CrystalDiskMark and AS SSD are of course designed for SSDs; and otherwise, the drive performed perfectly so we’re not too concerned. That said, these tests use direct access which might have implications for the new Microsoft Direct Storage technology.

Should you buy the Seagate Skywalker USB HDD?

As you can get a 5TB Seagate Basic HDD for only $10 over this drive’s MSRP (to say nothing of the price it’s currently listed at on Newegg); or get the 2TB Basic HDD for roughly $50 less, the special edition Luke Skywalker, Darth Vader, and Han Solo HDDs (not to mention the Beskar HDD) are far from being bargain storage.

They are, on the other hand, a lot of fun—especially factoring in the RGB lighting. Performance is on par (glitch excepted) with Seagate’s other external HDDs, so don’t worry about that. If they tickle your fancy, by all means buy one.