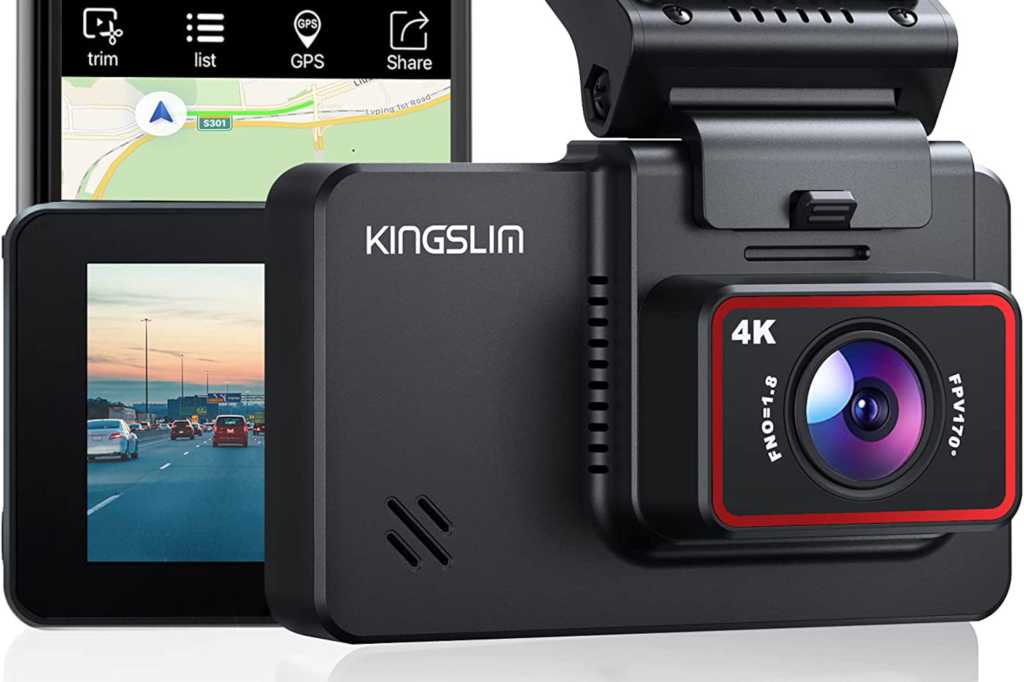 Image: Akaso
At a glance

The Kingslim D4 is unique in offering a front/rear dash-cam duo backup functionality, and its lush 3-inch touch display is almost unheard of at this price point. But there’s a reason for the low price: glitches and weak capture quality.

Kingslim (a brand of Akaso) sent us one of several dash cams it sells on Amazon, the $120 (on sale) dual-channel D4. It is a bit unusual in that the second camera may be used inside the cabin as a rear camera, or above the license plate as a backup camera.

Note: This review is part of our ongoing roundup of the best dash cams. Go there to learn more about competing products, what to look for in a dash cam, and buying recommendations.

The main camera body is slim and minimalist in terms of buttons. That’s what a touch-enabled colorful, 640×480, 3-inch display allows you to do. Unusually, the mini-USB power port (one of two) and TF card slots are hidden under a captive rubberized plug on the left side (as you look at the display). Situated directly above it is the power button—the only physical control available.

Power is supplied from an auxiliary (cigarette lighter) cable, which normally you’ll connect via the second mini-USB port in the included GPS sticky (semi-permanent adhesive) mount. At least if you want to power the GPS, which is in the mount. The main camera snaps onto the mount, which is adjustable vertically, but not horizontally. Be careful when you align it.

The app shown above (three screenshots combined) lets you offload videos from the camera, as well as tweak various settings. However, not all settings are accounted for—most notably GPS, which proved a tad cantankerous. Also, while I thought pressing the app’s record button would record directly to the phone, apparently it was still recorded to the SD card.

Other features include a parking mode and a 280mAh battery for almost 3 minutes of run time once the AC is lifted.

By choosing a dash-cam combo that includes a backup camera, you’re asking for a more complicated install. For the backup function to operate properly, the backup camera needs to be installed over the license plate using the supplied screws or sticky pads. Cable routing is more of an issue than with interior rear view cameras.

Normally, you can run the wire in through the housing for the license plate light, but it must then be routed all the way to the main camera, with the second red wire attached to the backup lights. Power (when you’re in reverse) through the red cable tells the main camera to go into backup mode. It’s not rocket science, but it takes time, patience, and discovering the best cable path.

If you want to install the backup camera inside as a simple rear-view camera, then you’ll need to use the supplied sticky pads to affix it to the rear window. You could also screw it to the rear deck but you’ll need to to detach the mount and rotate it 180 degrees so the video won’t be upside down.

All this is standard for a backup camera. Just be sure that’s what you want before purchasing the D4.

It’s not often that I see a front camera that’s better in low-light conditions, but the D4 is that. Night captures without my headlights on or oncoming traffic were the best of a rather mediocre lot. That makes it a decent camera for your car when it’s parked.

During the day, or at night with headlights involved—not so much. There was a surprising lack of detail (as you can see in the signs) from day captures, and the minute I switched my headlights on at night—an act that generally improves captures greatly—detail fled the image.

The above image is exceedingly poor for 4K UHD, proving that processing is every bit as important as hardware and resolution. The sensor is a Sony EXMOR IMX335, which is capable of delivering far better results than this.

You can see that the D4 is a having a difficult time handling bright areas but there was no white-level or exposure settings that I could find to ameliorate the issue.

The daytime rear capture with the camera on top of the license plate. Sorry about the human obstruction to the right. As you can see, the view suffers a bit of fisheye despite an only 120-degree field of view.

Rear night captures blurred to the point where they have an otherworldly look to them. Good luck reading license plate numbers. All the light areas you see are amplified far beyond what was actually viewable to the naked eye. Perhaps good for surveillance, but not fine detail.

The GPS kicked in, and showed a strong signal, but took quite a while to initialize. Alas, it also failed to embed in the video, as you can see in the screen cap below. Either that, or the app failed to read it. Note the g-sensor grid below the main image.

I was expecting far better capture results from the D4 given it’s 4K UHD/1080p resolution and high-end touch display. As I said earlier, you can’t always judge a product from its specs. The GPS not-embedding issue was also annoying and didn’t help the overall rating. It will likely be fixed in the near future, but as of now remains a problem.

Not to pile on, but there were numerous other small glitches that affected my overall opinion that the D4 is a product that could use some fine-tuning and TLC.

Should you buy the Kingslim D4?

Sadly, despite the comprehensive list of features and abilities, including the touch screen and enticingly low price, I can’t recommend the D4. Even if the GPS had embedded/displayed properly, the capture quality simply isn’t up to snuff. Spend a bit more and be happier in the long run.