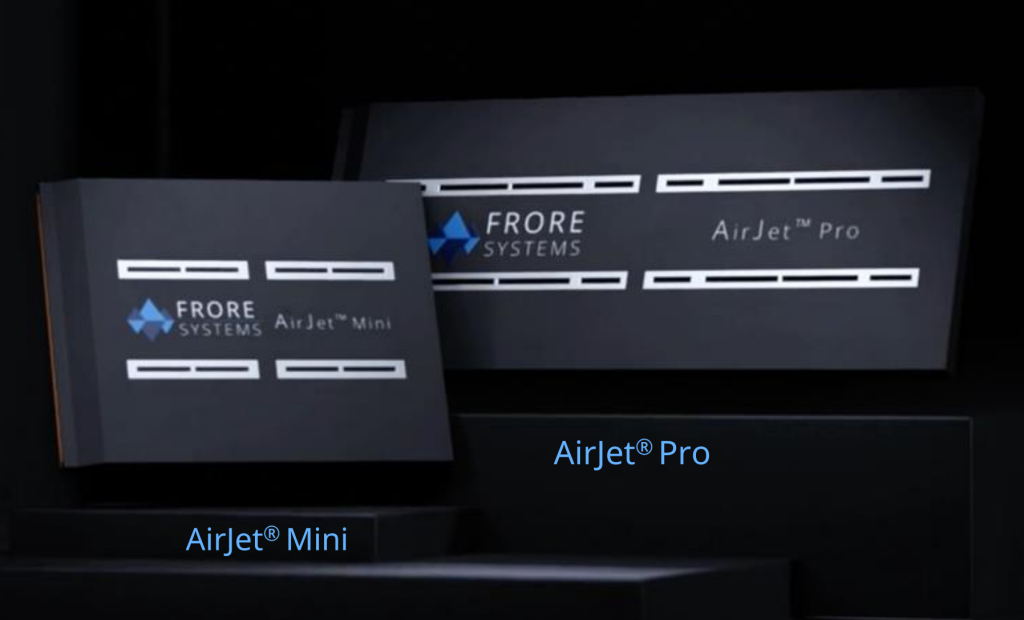 Fans keep chips cool. Most consumers know that, whether they’ve opened up their laptop or heard the whiny hiss of a fan. But a startup involved with Intel is using chips to keep microprocessors cool, massively boosting performance and changing laptop design forever.

Frore Systems is manufacturing two chips, the AirJet Mini and the AirJet Pro, that will be affixed to a laptop’s processor in place of a heat pipe or fan. Both chips actively, but nearly silently, cool the laptop’s CPU, supplying more air pressure but less acoustic noise than a conventional fan, according to company executives. But it’s the overall performance advantage — up to double! — that you’ll care about.

This is the argument behind the AirJet: “Very often, it’s the thermal solution capability that dictates how good the performance you’re getting out of a device,” said Dr. Seshu Madhavapeddy, Frore’s chief executive.

Virtually all processors include thermal sensors that “throttle” the chip to avoid overheating. At the same time, processors are designed to overheat; by putting the chip into an overclocked “turbo” mode, desktop and laptop chips alike will push past those thermal constraints to offer a brief period of increased performance. After that period expires, however (sometimes known as the “tau”) the processor drops back down to what we generally consider its rated speed, or PL1.

What Frore and the AirJet Mini and Airjet Pro are designed to do is to extend that “tau” period. In the case of an Arm-based PC notebook, Frore believes that the tau can be extended indefinitely. By pairing the processor with four AirJet Minis, a 1.8GHz Arm chip will run at its boosted speed of 3.5GHz “forever,” Madhavapeddy said. AirJet Pros, designed for X86 laptops, have a similar effect: a chip which could boost to 4.8GHz could instead drop down to a new PL1 of 2.1GHz, rather than the normal 1.4GHz you’d get using a pair of conventional fans.

Frore’s AirJet chips use a combination of fluidic, acoustic, and electrical resonance principles to suck cool air in from the top of the chip and push it out the sides at approximately the same temperature of the heat coming from the surface of the laptop processor itself. It’s then up to the laptop maker to vent that heat outside.

What it all boils down to is simple: by running a processor in its turbo mode, for longer, the laptop’s performance can increase dramatically. Or, as Frore itself puts it: “AirJet doubles processor performance.”

Desktops use a variety of techniques to cool chips and extend the tau time: radiators and coolers, large fans, even water cooling through a number of hoses. But a desktop case affords the physical space to make those solutions viable. Laptops and tablets are extremely space constrained, making these solutions far less practical. That’s why Frore’s AirJet is so interesting.

The Frore AirJet chips work by sucking air through the top of the chip inside of it, where the heat is exchanged and then vented out to the sides of the chip. To create the suction, Frore placed vibrating membranes inside the chip, which resonate at tens of microns of amplitude. According to Madhavapeddy, the membranes resonate at what he calls “structural resonance,” to create the maximum vibration using the least amount of power. Sensors in the chip dynamically adjust the resonance frequency as the temperature changes, he added. Frore claims that the heat transferred is near saturation, pulling the most heat possible from the processor itself. (It’s up to the laptop maker to vent the hot air to the outside world.)

“As [the membranes] vibrate, they pull air in from the top — they create the suction force which automatically pulls the air from the top into the chip,” Madhavapeddy said. “And then the air is pushed down through, kind of like a sieve at the bottom of the cavity. And it’s kind of like a showerhead, so the air comes through the top, and it’s pushed down through this sieve… And these [shower] jets are impinging on the copper heat spreader on the bottom. Heat transfer happens when these pulsating jets of air are hitting the copper heat spreader. They extract heat from the copper heat spreader with very high efficiency, and then the air exits.”

This all happens in a chip that’s only 2.8mm thick, Madhavapeddy added.

Madhavapeddy claimed that the AirJet chips deliver more then ten times the pressure of a typical laptop fan, while falling beneath the acoustic floor (21 to 24dBA) of a “silent” solution. Because of the high back pressure, he said, the intake holes can be covered with an IP68 waterproof/dustproof material, allowing a laptop maker to prevent dust and other particles from coating the inside of a laptop.

“We completely eliminate that problem because, in our case, you don’t need to have any vents at the bottom,” Madhavapeddy added.

Right now, the MiniJet solution is targeting mobile devices — laptops, tablets, and VR headsets. The next generation, designed to be thinner and lighter, will take aim at smartphones, Madhavapeddy said.

Though Frore manufactures its chips in a fab in Taiwan, the company uses a variety of techniques from various industries (from flat-panel manufacturing to aerospace) to affix the vibrating membrane to the anchor.

Madhavapeddy said that Intel is working with Frore to explore how the AirJet technology could improve its own chips. It’s unclear, however, how much this solution will add to the cost of a laptop or laptop processor. “We’re competitive relative to the value that we’re delivering,” Madhavapeddy said. “We are engaged with several OEMs and we expect you will see products in the market in 2023.”

How Intel is involved with Frore’s AirJet

According to Intel, the two companies are involved in an “engineering collaboration” designed to improve the performance of Intel’s Evo laptops, which are co-designed with the laptop makers themselves. Intel, Frore, and select PC makers are working together to co-implement the MiniJet technology and help Frore bring it to market.

“Intel’s mission with Intel Evo is to unite the open PC ecosystem to deliver the best possible laptop experiences that people want,” said Josh Newman, vice president and general manager of mobile platforms at Intel, in a statement. “Engineering thin, light, stylish laptop designs that offer great performance while remaining cool and quiet are foundational to that mission. Frore Systems’ AirJet technology offers a new and novel approach to help achieve these design goals in new ways and Intel is excited about the engineering collaboration with Frore Systems to help ready their technology for future Intel Evo laptops.”

An Intel spokeswoman said via email that there is no financial arrangement beyond a development agreement. In the past year, Intel has helped Frore implement prototype chips into real notebooks, helped set engineering targets like fan noise and skin temperature, redesigned some of the surrounding motherboard architecture, invited Frore engineers to Intel’s Bangalore lab for debugging and tuning, and gave “practical guidance” to help Frore work with more hardware makers via improved layouts and prototyping.

At this point, it’s not clear how much cost the AirJet will add to a laptop, or in what numbers AirJets can be manufactured. Will AMD sign on to use the technology? Will an AirJet competitor emerge? All these questions will eventually be answered. But the fact remains that Frore, and its AirJet technology, are one of the most interesting additions to laptops and PCs in years.

Clarification: One quote from Madhavapeddy was mis-transcribed. Two words have since been corrected: “sieve” in place of “sea,” and “jets” instead of “vents.”