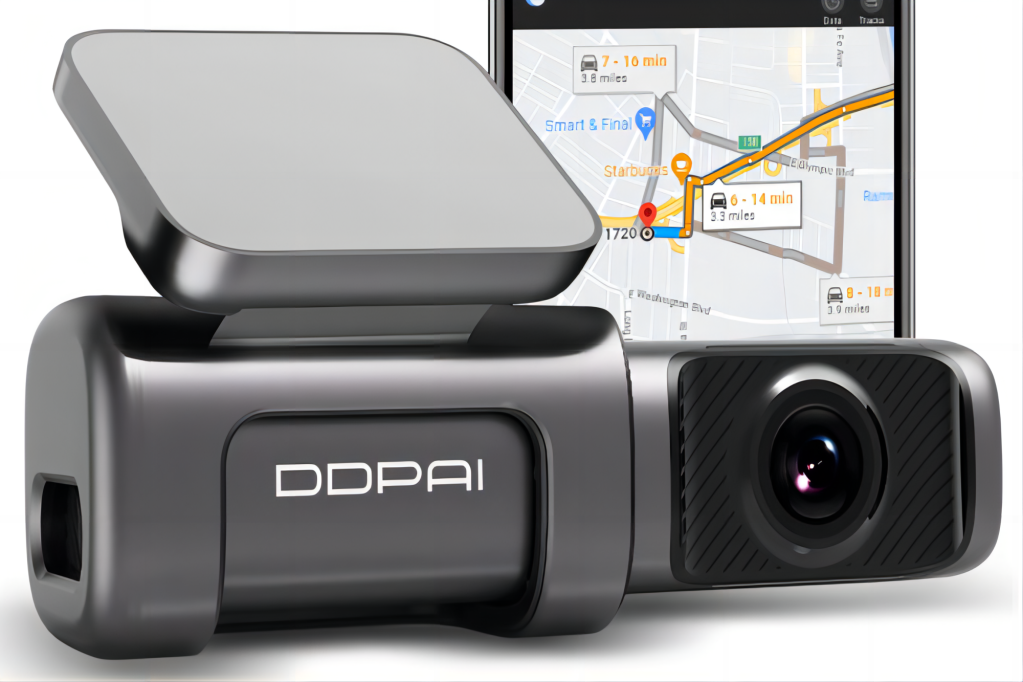 We like the elegance of the DDPai Mini5 and its good day/night captures. It’s phone centric/dependent, so if that’s your thing, you’ll like it. Note that the memory is hard-wired internally (64GB), but should still last you around 15,000 hours according to DDPai.

The $160 ($110 on sale via a coupon on Amazon at the time of this writing) DDPai Mini5, is one of the more elegant front dash cams I’ve experienced. It’s of the display-less (and largely buttonless) variety, but with the phone connectivity, most users will barely miss it or the buttons. It also opts for internal memory and computer connectivity over TF cards.

This review is part of our ongoing roundup of the best dash cams. Go there to learn about competing products, what to look for in a dash cam, and buying recommendations.

The Mini5 is a flattened cylinder approximately 4.15-inches long, 1.45-inches deep, and a hair less than an inch thick. The 140 degree field-of-view, 4K UHD camera is by far the most prominent feature on the main body. The only other notable physical features are an emergency save button on the left and a Type-C port on the right, plus an activity light on the back (green means active).

The mount is a self-adhesive (semi-permanent) cage that the camera itself slides into. You attach the Type-A-to-Type-C USB power cable (an aux adapter is included) after the camera is in place and it helps keep the camera from slipping out. Not that that is a likely scenario—the fit is very snug. The Mini5 and mount both have a substantial feel. Many dash cams feel cheap; this one doesn’t.

As mentioned, the Mini5 features integrated eMMC memory—64GB of it, to be exact. That’s a fair amount; however, the math might be considered a tad concerning. With the video captures taking approximately 234MB per minute at 3840×2160 (222MB for a full-res file, and 12MB for a smaller file used for display, etc.) you’ll write the full capacity of the card in less than five hours.

Good optics and processing can make up for a lot of the missing detail from 4K UHD, but try the three resolutions and see which you like best. Normally, I step up to 4K UHD only when the scenery warrants it. That said, I’m unlikely to ever approach 15,000 hours of dash cam use so I might just set it to max and forget it.

The Mini5’s Spartan design is because all settings are tweaked using the DDPai app. The app features an installation guide and alignment grid on the home page’s live view. You connect via Wi-Fi (faster 5GHz when possible), so there’s only your phone service internet while using the app. Various parameters include g-sensor tweaking, how to handle GPS info, volume, audio capture, etc. All the normal goodies.

There’s of course a parking mode, but it requires that the camera have constant power. This means a hard-wire kit or OBDII power cable. Note that it is possible to run your battery down with such a setup, though most cameras will ditch the parking mode if an under-voltage state occurs.

The app also will display a map of your travels, but only after you download videos to your phone. The aforementioned smaller files are used for preview directly from the camera. On a rather random note, I will say that hearing “Hello Ding Ding Pai” every time the camera powers up makes me smile.

So does the two-year warranty, which is twice the length of most. Note that some cheaper dash cams are only warrantied for 90 days. I can’t vouch for DDPai’s customer service, but the company’s PR were dogged in their communications with me.

Though I found the Mini5’s daylight video a tad overexposed, the effect was minimal and can be dialed back in the settings. Some of the indistinct mottling you see below is my windshield and due to inclement conditions the night before. Most cameras filter this out. However, all in all, day captures are colorful and reveal plenty of detail. That integrated GPS allows you to pinpoint locations and track your travels.

Night video was generally quite good, though I did notice one instance of flare blowout that you can see in the second capture. This must’ve been a freak angle and even cars driving closely by didn’t cause this phenomenon.

Below is the artifact I told you about. As noted, this was the exception and generally flare is not an issue. Note that you can still see good detail in the surrounding areas. And yes, 0km/h means I was parked. There’s a setting to change this to MPH for the U.S. market. I didn’t notice it immediately as dash cams sold here are normally set to MPH.

I should note that the Mini5 ran very cool. The unit employs a super capacitor which allows the camera to run long enough to save any current video, but not to capture post-incident action should the car power fail.

Should you buy the DDPai Mini5?

Other than the integrated memory wearing out in the far future (like Apple’s planned obsolescence with SSDs), there’s nothing about the Mini5 not to like. It’s lush, exceptionally easy to set up and use, and the captures are very good. If you desire the premium experience provided by the DDPai Mini5, go for it.