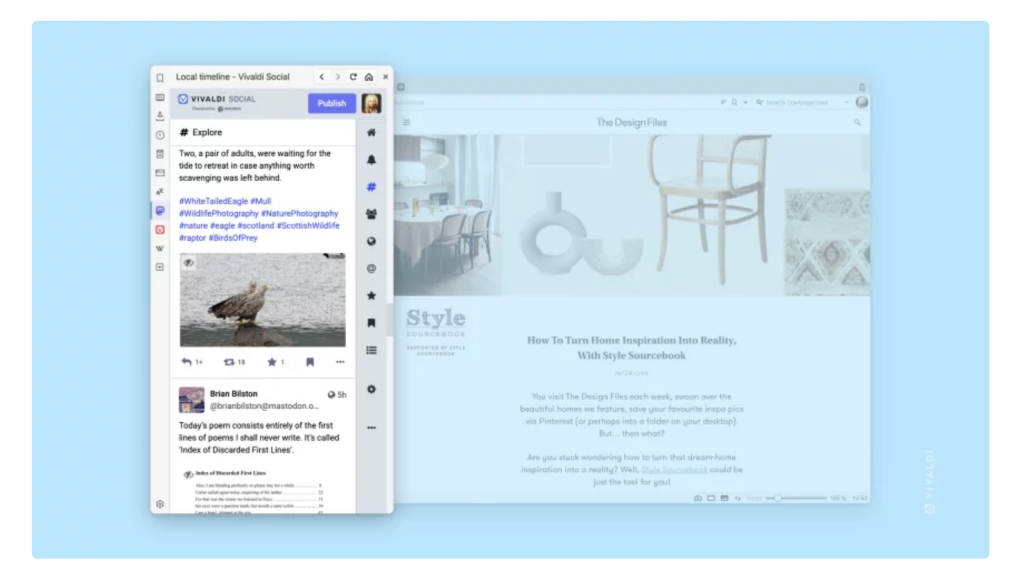 Many Twitter users have struggled to decide whether to remain on Elon Musk’s platform, or go elsewhere—and where to go, if they do. Vivaldi wants to make it simple: Not only has it launched a Mastodon instance, but it has integrated support directly into the latest version 5.6 of the Vivaldi browser, too.

As a niche browser whose market share pales in comparison to both Google Chrome and Microsoft Edge, Vivaldi has had to be innovative in terms of adding new features to prompt users to switch: Reader View, the side panel, and more. Now, Vivaldi has leverage the zeitgeist: dissatisfaction with the craziness surrounding Twitter, Elon Musk, and the potential for unwelcome voices on the platform.

Searching for an alternative, then, has been a chore, with choices between Mastodon, Cohost, Post News, Hive, and more. The name on top of most “alternatives to Twitter” lists—however imperfect those lists or respective apps may be—has been Mastodon, the federated social network. There are two ways of integrating Mastodon within Vivaldi.

First, Vivaldi has launched Vivaldi Social, a Mastodon instance that you’re automatically signed up for if you have a Vivaldi account. That’s not to say that if you use Vivaldi you’ve automatically joined Mastodon. If you have a Vivaldi account, you already have a place reserved for you as part of Vivaldi Social—but you have to opt in to actually use the account. If you do, you can display the Mastodon interface as one of the options in the Vivaldi side panel.

Mastodon instances, however, come with their own rules—the Mastodon instances can “talk” to one another through the ActivityPub network—and you might feel uncomfortable being part of the Vivaldi Social network. If you’d like, you can sign up for your own Mastodon instance, which will also show up in the side panel. In this case, you’ll simply see a “split screen” view of both instances, according to Vivaldi.

Vivaldi 5.6 also includes a revamped Settings menu and the inclusion of a new search engine, You.com, as an optional supported search engine, the company said.