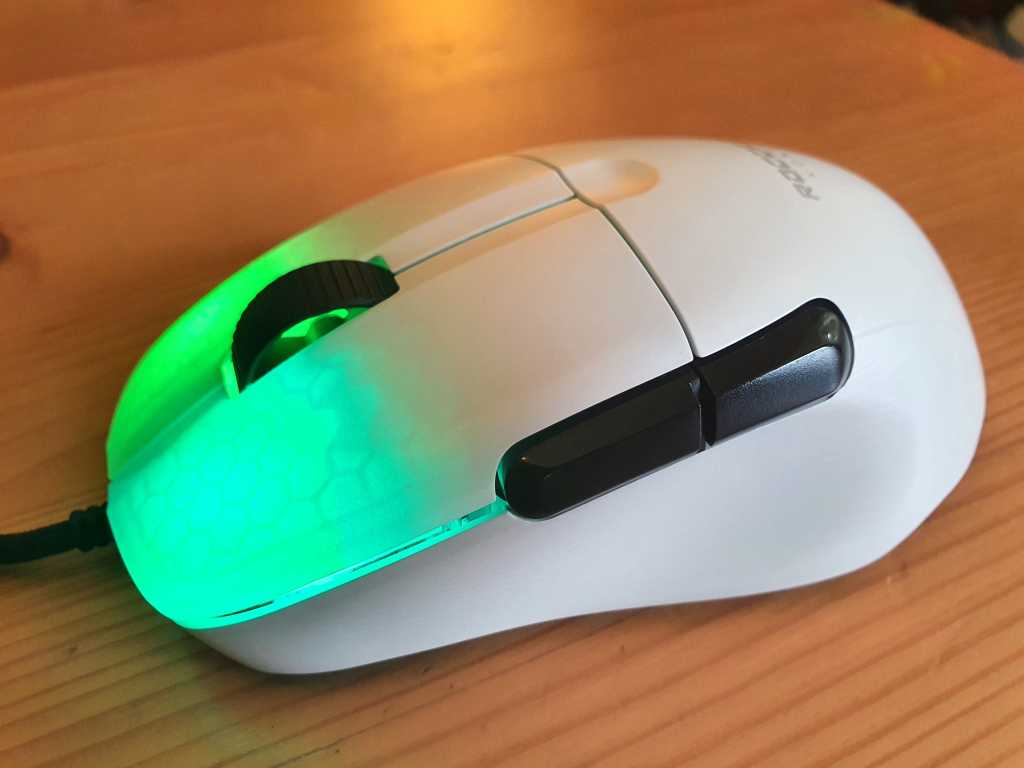 The Roccat Kone Pro is a formidable gaming mouse with a lightweight design that makes it quick off the mark on your mouse mat. It also has impressively fast buttons and looks very stylish thanks to two dazzling RGB lighting zones.

Accordingly, it has wave-shaped grooves on its flanks that provide plenty of grip, and up top, a gentle left-to-right slant poises your trigger finger at the highest point ready to fire. Add to those winning traits, a very precise 19,000 DPI optical sensor and extremely quick optical switches, and by virtue, then, the Kone Pro is an extremely effective gaming mouse for FPS gamers.

This review is part of our ongoing roundup of the best gaming mice. Go there to learn about competing products, what to look for in a gaming mouse, and buying recommendations.

Its main merits established, there’s a lot more to like about the Kone Pro’s design. In fact, you could say it’s the mouse’s best asset, providing the right amount of comfort without compromising on performance. Size-wise, the 4.94 x 1.57 x 2.83 inches are smack-on to fit large to medium hands, and the shape works perfectly with any of the three main grip types.

The modest eight-button selection is also ideal for quick action games where you have only a few commands to remember—so fans of the Call of Duty, Battlefield, or similar franchises, are well advised to take note. In addition to the two main clicks, you get two buttons on the left-hand side and a mouse wheel with forward, backward, and downward functionality. An extra button on the underside switches between your onboard profiles.

The main buttons are generously proportioned, such that I could easily get two whole fingers on the right one. To my delight, I found that using an extra digit here gave me millisecond-faster aiming that made a big impact on my gaming.

Roccat has done extremely well giving the Kone Pro a thin plastic coating. As well as enabling its 66-gram weight, this outer shell is largely responsible for its stunning looks. The Kone Pro has just two RBG zones at the front beneath the main clicks but the thin casing lets just enough light pass through it to create a mesmerizing glow effect.

This dazzling RGB bathes your fingers in colorful light, ensuring you always get a spectacle when you look down, no matter whether you’ve opted for the black or the white color option at the checkout.

Simple wired connectivity is another way Roccat has achieved such a lightweight design. By comparison the wireless version, the Kone Pro Air, weighs an extra nine grams. But the 1.8-meter USB-A to USB-C cable doesn’t feel cheap, being both very flexible and strong. It also comes with a useful cap to prevent dust and moisture getting inside.

Swarm is Roccat’s supporting software app where, among other things, you can assign functions to the eight programmable buttons, make changes to the RGB lighting, and build out its five onboard memory profiles. The text in Swarm can be a little small and difficult to read at times, but to its credit the app goes above and beyond in regard to what you can modify.

For the button assignment, for instance, you can expand the generic eight commands to 16 by making one of the Kone Pro’s buttons an Easy Shift [+] trigger. Doing this allowed me to play (and stand a chance in) RPG and MMO games where a bigger command bank is an asset, so making this change was definitely worth the hassle.

The options for assigning DPI are also very thorough. You can set values between 50 to 19,000 in increments of 50 units, or else make use of a calibration tool that sets you an approximate DPI based on your movements. Regrettably, however, the Kone Pro lacks a dedicated DPI button, so you can’t simply switch between DPI settings at will in games without setting up another button in Swarm to do so beforehand, or else changing profiles.

That said, if you’re the kind of gamer that likes to just set and forget, you may find yourself spending a lot more time in Swarm than you would otherwise want to, which can get a little tedious.

The Kone Pro sports the same 19,000 DPI Owl-Eye optical sensor as the Roccat Burst Pro Air—another of our recent PCWorld reviews. Consequently, it can track movement at 400 IPS (inches per second) and has an adjustable liftoff distance—a feature that pro gamers especially will find useful.

As this wasn’t my first rodeo with this sensor, I was less interested in how it performed (it’s a ripper) and more interested in how it could perform in a completely different design. To that end, I fired up Call of Duty: Black Ops to compare performance between the Kone Pro and the Burst Pro Air.

My playtesting proved the Kone Pro to be the quicker, more precise gaming mouse, which I attribute to the Kone Pro‘s more generous PTFE glide skates on its underside, including around the sensor itself, which allowed for a smoother motion on my neoprene mouse mat.

At just 66 grams, the Kone Pro also required much less effort to wield compared to the Pro Air, which is a full 15 grams heavier. This meant I could make much lighter and more precise movements and additionally play for longer than I could with the Burst Pro Air, without any uncomfortable tension in my wrist. Considering the Kone Pro currently ships for $35 cheaper, it seems overwhelmingly like the better value option.

The Kone Pro’s buttons, which are powered by Titan Optical switches, also deserve praise. They actuated instantly and never mis-clicked. In fact, at times they were so quick that I found I’d already relaxed for the countdown to respawn, only to find that I’d come up trumps in firefights. Roccat rates them for 100 million clicks, so they should also be quite durable.

The benefit of the sloping top also can’t be emphasized enough. It provided the perfect leverage for my trigger finger, thereby allowing me to get a slight speed advantage when firing. A bonus for me was that the buttons also felt tactile and surprisingly cool to the touch on hot days, which added to my comfort in a big way when the temperature in my gaming den was pushing 86 degrees.

Should you buy the Roccat Kone Pro?

With the Kone Pro you get an attractive, lightweight, and affordable RGB gaming mouse with a precise sensor and very quick optical switches. True, it may lack a dedicated DPI button, and wireless connectivity, but a superb design that orientates your fingers for the quickest possible response more than makes up for these shortcomings. Consequently, if precision and speed are on your gaming-mouse wish list, then the Roccat Kone Pro is an excellent choice.