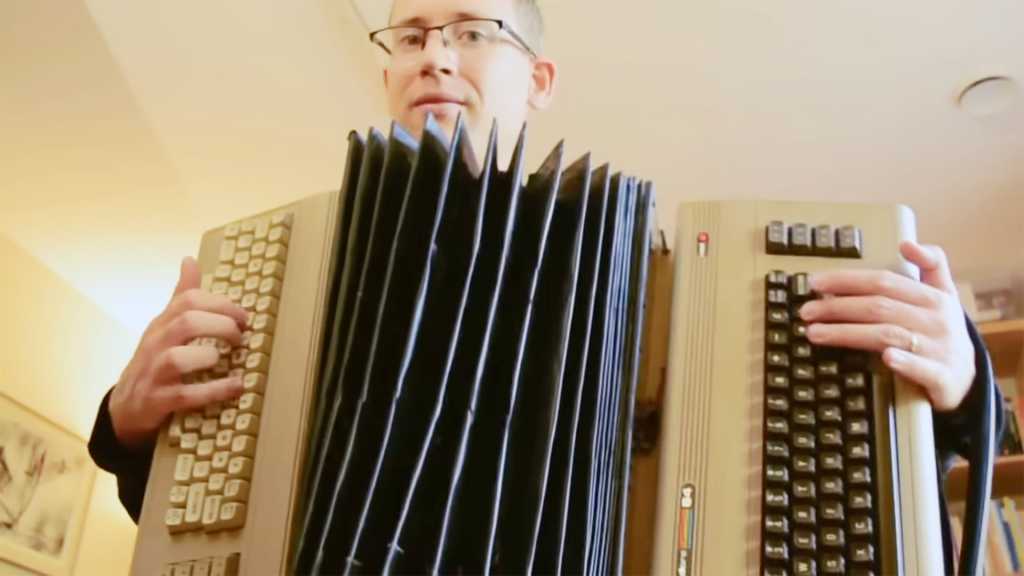 The accordion is possibly the most nerdy instrument on the planet, until someone figures out a way to operate a digeridoo with a Guitar Hero controller. But for now, the crown certainly goes to Swedish musician and electronics engineer Linus Åkesson. He’s been combining his passions for music and vintage electronics for years, but his latest project is surely his masterpiece. The “Commodordion” is a working accordion made from two Commodore 64 computers.

The instrument’s hardware is two authentic C64s from the 1980s, connected with a bellows (the foldy thing in the middle) made from dozens of floppy disks taped together. It’s fully functional as a standard accordion, with the right hand playing melody on the computer keyboard and the left hand playing chords through the Commodore 64’s sound processor, output via a standard audio cable. The result is an 8-bit chiptune symphony, first spotted by Ars Technica.

The bellows on a standard accordion emit the sound across steel reeds, and the speed at which the player compresses or expands the instrument controls the volume. Åkesson’s invention emulates this action digitally: a microphone measures the air being expelled by the bellows and adjusts the volume of the sound output to match. The whole contraption is powered by a custom-soldered internal battery (for both computers), running software written by Åkesson loaded onto each vintage PC.

But what’s the point of playing with two computers if you’re only going to replicate regular music? In addition to playing the Commodordion conventionally, Åkesson can program custom beats and loops on the left half of the machine, making it work something like a rhythm box or MIDI keyboard.

Not content to merely show off his musical ability, ingenuity, programming, and hardware modification skills, Åkesson cut together his demo as a love letter to Scott Joplin and the 1973 Oscar-winner The Sting. The whole video is worth a watch to see his work designing and assembling the machine, programming it, and of course, playing it. You can find more technical details on the build at Åkesson’s website.