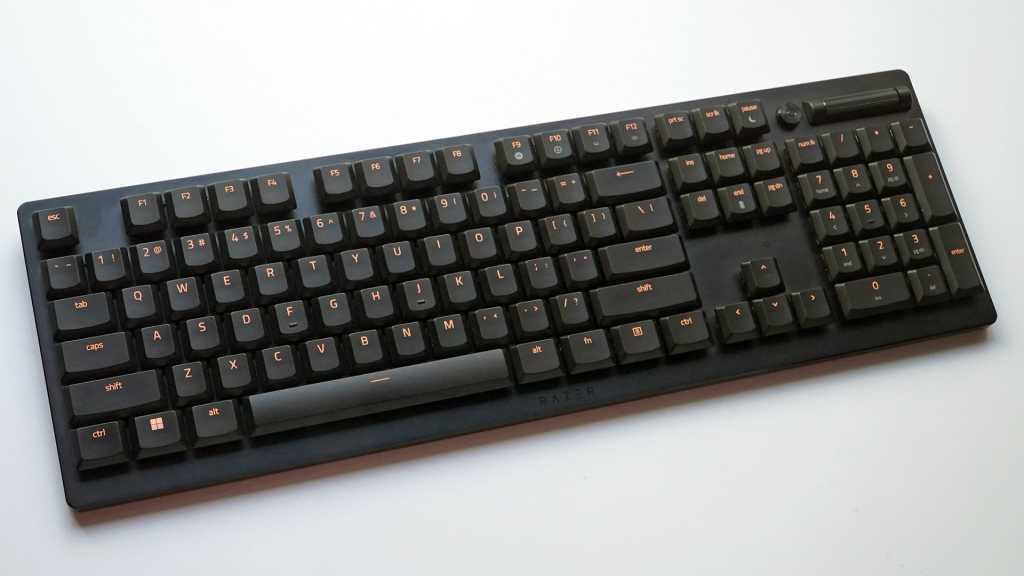 Image: Michael Crider/IDG
At a glance

From the sleek profile to the comfortable keys, the Deathstalker V2 has a lot to offer, but the price tag is just too darn high.

After a decade or more of gaming keyboards being synonymous with big, thicc (note the two Cs!) MX-style switches, it looks as if thin is in once again. Razer’s here to meet the trend with an update to its Deathstalker line. Previously a series of ultra–sleek, ultra-slim boards, the new Deathstalker Pro uses low-profile mechanical switches to land somewhere between the new and the old.

Razer has put just about every one of its premium features into this design, with the notable exception of its analog switches, which haven’t gotten the miniaturization treatment yet. Beyond that, it’s the general gaming goodness you’re familiar with, plus dual-channel wireless, a snazzy volume wheel, and a dedicated media button.

Is that enough for a $250 keyboard? Frankly, no. But if you feel like treating yourself (or a gamer gift recipient), it’ll be a nice change of pace from the chunky status quo.

The Deathstalker V2 Pro is the biggest and most expensive of a trio of new boards. It comes in the same full-size form factor, sans wireless powers, or in a more compact wireless and tenkeyless design. Beyond that you get the choice between clicky or linear switches — most gamers will prefer the latter. It comes in any color you want, so long as you want black (white coming eventually!), but Razer’s typical per-key RGB Chroma lighting is present, sans any embellishment on the side and bottom.

Razer’s low-profile switches are a little stiff compared to the larger MX-style keys with longer key travel, but it’s easy enough to get used to them. They’re much more comfortable than the super-skinny Ultra Cherry Low Profile seen on the slightly more expensive Corsair K100 Air and roughly comparable to the Kailh Choc keys that have been on the market for a while. If you’re used to any mechanical board (or a really good laptop keyboard), you’ll feel right at home.

Those low-profile keys make the keyboard notably more sleek than Razer’s conventional designs. With a height of just one inch at the thickest (about 1.75″ with the dual-stage feet fully extended), it’s easy to toss in a bag…so long as your bag can accommodate its full-size length of a tad over 17 inches. Go for the TKL design if you need something a bit more compact.

Deathstalker V2 Pro: Thin is In

The most obvious addition on the top of the board is the comfy, extra-wide volume scroll wheel on the far right. This has become something of a standard in premium designs, but it’s well-implemented here: a solid metal wheel with comfy kerning lets you scroll confidently. It’s a little tricky to get the downward push (a la a gamepad joystick) to set volume to mute by default — I often found myself scrolling a bit after pressing and thus canceling the mute action. The play/pause button to the left is fine, and easy to distinguish.

The aluminum top extends to the sides before transitioning to a weight-saving plastic bottom. On the top edge, you’ll find a power toggle that switches between Bluetooth and 2.4GHz wireless (with 1000Hz, 1ms “HyperSpeed” tech, literally too fast for me to measure) when not in the “off” position. There are also three dedicated device buttons, a handy change from tucking that feature in the function layer.

It’s a smart layout. While I prefer a little more key travel, I was able to transition to the Deathstalker on my usual games with no trouble. Again, it was far more comfortable than the Corsair K100 Air on the extreme end of the thinness meter. Battery life was about a week of regular use (including hours of typing for work every day) with the lights on medium. If you can live without them, Razer claims almost 200 hours of use, a figure I have no reason to doubt.

Razer’s Synapse driver system has become simpler and more straightforward over the years, a much-appreciated change. I also like how you don’t have to log in to make changes, even though Synapse makes it really clear that it wants you to. The quick links for reprogramming the scroll wheel are helpful — by default, you can set it to control standard volume, mic volume, standard mouse-style scrolling, page zoom, device brightness, or scroll through Windows apps.

Otherwise the software is its usual, serviceable self, with a huge amount of lighting and device-linking options. You also get the choice to set time-outs for lighting and the wireless power-saving mode, which takes a second to wake the keyboard up.

Unfortunately in order to get that programming to stick, you need to keep Synapse installed and running. I’ve seen similar limitations on the built-in profiles before (see also left and right scrolling on Razer mice). It’d be nice if Razer could find a way around this limitation, because at the moment it feels like an intentional omission to keep Synapse around.

Aside from just one software limitation and a slightly finicky mute button — which you can easily program around — it’s hard to find any low points for the Deathstalker. Except for the $250 price, of course. I realize that there are a lot of $200+ keyboards out there, but that doesn’t mean any of them are fairly priced, and the Deathstalker’s low-profile keys aren’t a feature that demands such a premium.

To justify this expense, the keyboard would need something with more oomph in its spec sheet. More dramatic lighting, incredible battery life, the ability to transform and roll out, heck, I’d even take a wrist rest. There’s a notable lack of one, despite some very comfy Razer wrist rests included in keyboards like the Huntsman and Blackwidow (the latter of which is cheaper than the Deathstalker).

Compared to similar offerings like the Logitech G915, the Deathstalker is pricey. Compared to budget options from Redragon and Keychron, it’s exorbitant. It’s a nice board if you want something sleeker than normal and you’re already invested in Razer’s ecosystem. But for regular gamers, it’s just too expensive to recommend.