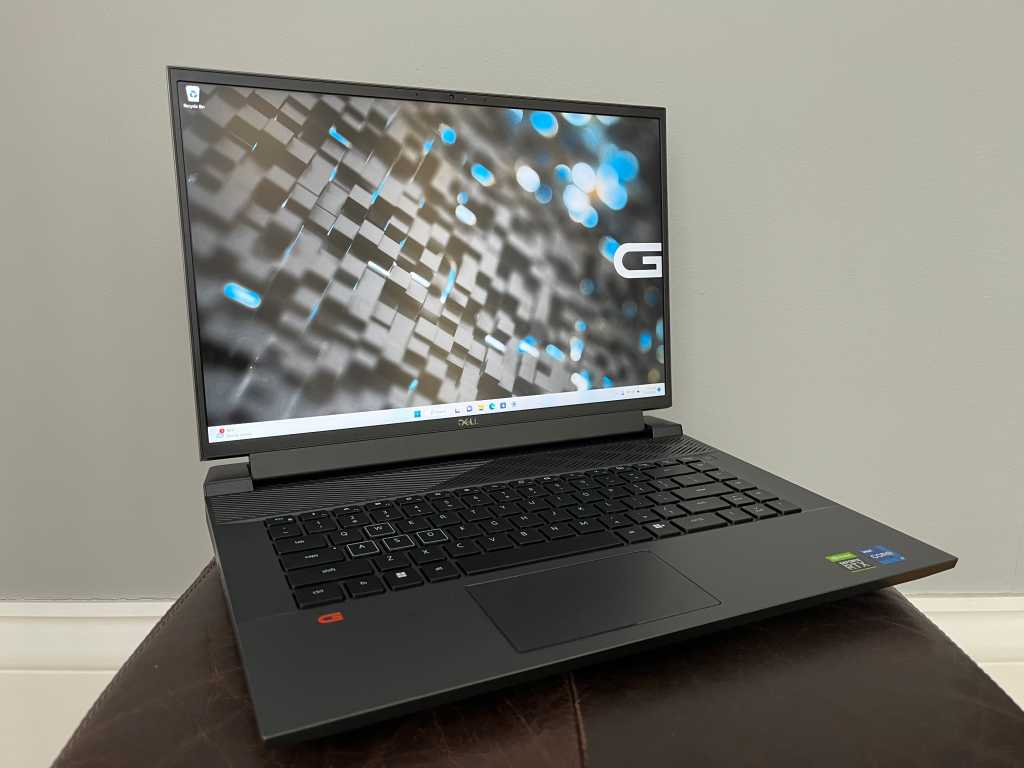 The 16-inch Dell G16 isn’t much to look at, but beneath its grab, gray exterior is one the fastest midrange gaming configurations we’ve tested.

The Dell G16 is a midrange gaming PC that prioritizes function over form. It’ll serve you well if you are looking for the biggest pixel-pushing bang for your gaming buck and are willing to put up with an uninspired design to get it. Beneath the grab, gray exterior is a powerful CPU-GPU duo —  the Core i7-12700H processor and RTX 3060 graphics — that puts this laptop at the head of the midrange gaming pack.

The 16-inch display offers a QHD resolution that’s one notch above the FHD panel usually on offer at this price and gives the Dell G16 added versatility. You likely won’t run games above 1080p with the RTX 3060, but the higher resolution provides more room to multitasking on the 16:10 display and a finer picture for detailed graphics work. On the whole, the Dell G16 looks like a budget gaming laptop that delivers strong midrange gaming performance for a price that is somewhere between budget and midrange. And when it’s on sale, its price nearly dips into budget territory where it offers great value.

Looking for more laptop options? Check out PCWorld’s roundup of the best laptops.

The Dell G16 is unlikely to turn heads. The chunky chassis features a mix of plastic and aluminum in a boring dark gray color that looks like a better fit for a corporate workhorse than a gaming rig. There is very little about the design that disguises the Dell G16 as a gaming laptop. Perhaps the crisscrossing vents on the diagonal above the keyboard are a hint, or the red “G” logos on the wrist rest and right edge. (It’s hard to tell if the “G” stands for “gaming” or just “gray.”) The G16’s design is about as straightforward as it gets.

Most of the chassis is made from plastic, including the keyboard deck, bottom panel and bezels framing the display. The lid is made from aluminum and provides rigid protection for the display. Despite being plastic, the keyboard deck feels sturdy with little to no flex. The tradeoff for this sturdiness is heftiness. The Dell G16 tips the scales at 5.7 pounds, which is substantially heavier than other 16-inch models we’ve reviewed. By comparison, the HP Envy 16 weighs 5 pounds, the Dell Inspiron 16 2-in-1 weighs 4.7 pounds, and the Lenovo ThinkPad Z16 weighs only 4.3 pounds. The Dell G16 is also portly at 1.1 inches thick. There’s nothing about the design that feels sleek or modern other than the display’s aspect ratio.

Gaming laptops of yore were either 15.6-inch models or 17.3-inch models with a wide 16:9 aspect ratio. The Dell G16 is a member of a new generation of laptop based on a 16-inch display with a taller 16:10 aspect ratio. With more space from top to bottom, the display feels much roomier than a 15.6-inch 16:9 display and roughly the same as a larger 17.3-inch 16:9 display. The taller aspect ratio isn’t useful for games, but it provides more room for multitasking during general Windows use and means you’ll need to scroll less through long documents and web pages.

Likewise, the QHD resolution isn’t all that useful for games, especially with a midrange RTX 3060, since it’s doubtful you’ll crank the resolution past 1080p. But this finer resolution provides a sharper picture than a FHD panel — text and edges of images look crisper and allow the Dell G16 to double as a content creation machine in between gaming sessions. This versatility adds to the G16’s overall value, and it’s priced aggressively to begin with.

The display’s 165Hz refresh rate is pretty much the standard for a midrange laptop and results in smooth visuals. With the RTX 3060 unlikely to push frame rates past 165 fps with any frequency, it more than suffices. The display’s brightness is also ample; I measured a maximum of 460 nits, which is far better than the 250- or 300-nit panels found on most budget models and some midrange models.

The 720p webcam is a disappointment. Nearly every laptop we’ve seen this year with the exception of truly budget models features a 1080p camera that produces a superior image. The Dell G16’s 720p webcam produces poorly exposed images that lack detail in dark and light areas and are beset with noise.

Many gaming and entertainment-minded laptops find room for four speakers for better, fuller sound, but the G16 sticks with the standard pair of stereo speakers. They have enough oomph to fill a small room but the clarity declines as you push the volume toward its max. And even at 50 percent, the sound is not dynamic and lacks a bass response.

The only nod to gamers on the keyboard is the outlining and bold lettering on the WASD quartet of keys. Otherwise, it’s a standard keyboard. The keys are soft to the point of feeling a bit too mushy. I would have preferred a firmer feel with a snappier response. The keyboard lacks a number pad, and in its place is a column of volume-control keys. I’d argue those are more useful than squeezing in a numpad. There’s also a microphone-mute key in this column, but there’s no key to kill the webcam. And without a physical shutter, the Dell G16 provides no way to ensure your privacy when the camera isn’t in use. The lack of a numpad also means you get four full-size arrow keys, which is always appreciated.

The keyboard features RGB backlighting but at its most basic. It’s one-zone lighting that you can control via the Alienware Command Center app. You can set the lighting to be static or choose from a handful of animations. We don’t expect per-key RGB lighting on a midrange gaming laptop, but four-zone lighting certainly isn’t unprecedented on a $1,500 model.

The touchpad is woefully undersized. The keyboard is shifted down on the keyboard deck to accommodate the wide venting at the top, which leaves little room for the touchpad below the display. And like the keys themselves, the touchpad’s click response feels a bit mushy with too much travel required to perform a click. You’ll want to keep your headphones handy because of the average-at-best speakers, and you’ll also want to keep your mouse nearby because of the subpar touchpad.

The Dell G16 features a useful selection of ports, but I’d like to see a second Thunderbolt 4 port and would happily trade one of the three USB Type-A ports for it. The laptop features a barrel charger, so at least you can keep the Thunderbolt 4 port free while you are charging the system.

You’ll find ports on either side of the system:

And there are more ports on the back:

As you’ll soon see, the Dell G16 is a strong midrange performer, posting strong results on our application and multimedia tests as well as our graphics and gaming tests. We compared its performance to that of other RTX 3060-based gaming laptops as well as a Lenovo Legion 5 Pro with RTX 3070 graphic and a pair with RTX 3050 Ti graphics.

Despite its heavily vented, bulky chassis, the Dell G16 was one of the noisier gaming laptops we’ve tested. Its cooling fans kicked in not only during our 3D graphics and gaming tests, but they also revved up during our multimedia tests. And they get loud! They even ran constantly while we streamed YouTube videos.

First up is PCMark 10, which measures performance on everyday computing work including office productivity tasks, web browsing, and video chats. The Dell G16 finished first, beating out the other systems with the same Core i7-12700H CPU as well as the two with the Core i9-12900H chips.

Our HandBrake benchmark tests how a laptop is able to handle crushing CPU loads over a lengthy period—in this case, transcoding a 30GB MKV file to a format suitable for Android tablets using HandBrake, the free video encoding utility. The Dell G16 finished second to the Acer Predator Triton 300 SE, and this pair had a substantial advantage over the rest.

Next up is Cinebench, another CPU-intensive test but one that renders a complex 2D scene over a short period of time. The Dell G16 again finished second, this time to the Dell XPS 17 9720. The two Dells along with the MSI Katana GF76 were the clear winners on Cinebench.

Our first 3D graphics tests are two benchmarks from 3DMark — Time Spy and Port Royal. The Dell G16 did well on both tests, finishing first among the RTX 3060 systems and trailing only the RTX 3070-based Lenovo Legion 5 Pro.

To test a laptop’s battery life, we loop a 4K video using Windows 11’s Movies & TV app, with the laptop set to Airplane mode and earbuds plugged in. We set the screen brightness at a relatively bright 250 nits to 260 nits, which is a good brightness for watching a movie in an office with the lights on. The Dell G16’s 84 watt-hour battery lasted six hours on our battery rundown test, which is a bit below average. You won’t be able to stray too far from a wall outlet with the Dell G16.

The Dell G16 isn’t much to look at, with its mostly plastic design that’s both boring and bulky. The high-resolution, 16-inch display with a 16:10 aspect ratio lends the laptop utility beyond gaming and this added versatility improves the system’s value proposition. For gaming alone, however, it offers tremendous value as one of the most powerful RTX 3060-based laptops we’ve tested. Midrange buyers who want the best performance for their dollar and don’t need the flashiest design ought to consider the Dell G16.