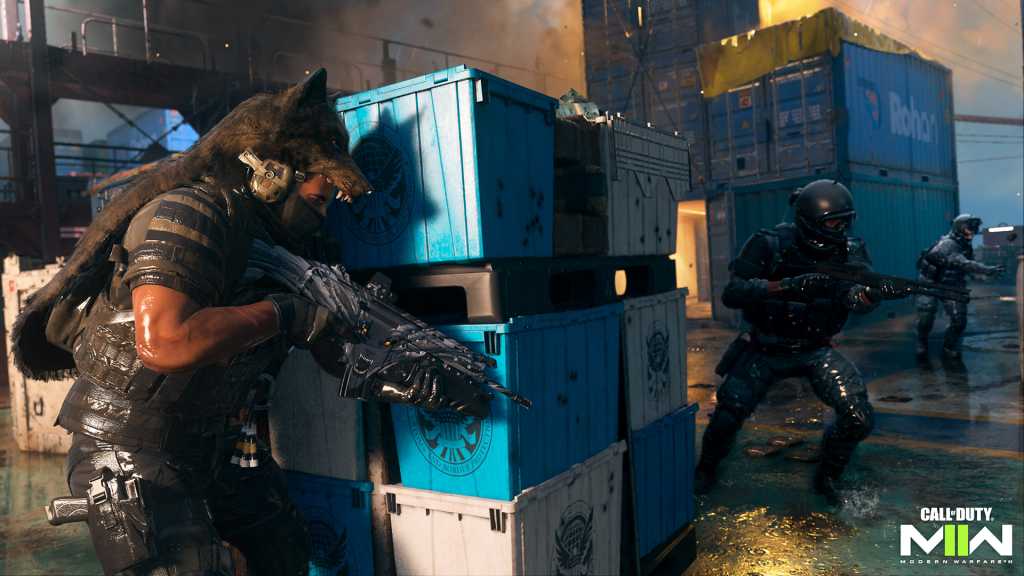 I spent the last full weekend before Christmas doing two things: Baking approximately a bajillion cookies with my kid and girlfriend, and relentlessly playing Call of Duty: Modern Warfare 2’s brand-new Shipment map with my squad. (Shoutout HOPO crew!) It couldn’t have come at a better time, because its sheer glorious insanity papers over my deepest grievances with the ultra-popular shooter.

COD vets will be intimately familiar with Shipment, a close-quarters map that has shipped in several iterations of the game. While the other, larger 6-vs.-6 maps in MW2 feature a mixture of close-, mid-, and long-range battles, the boxed-in Shipment map forces constant in-your-face action. You often respawn already in enemy sights. Heck, you can even respawn in the midst of a hail of gunfire or explosions, getting mowed down before you even have a chance to get your gun up.

But here’s the thing: Those terrible respawns work on Shipment. I needed the breath of fresh air after struggling with COD:MW2’s atrocious respawn system on all the other maps.

Head over to the MW2 subreddit—or simply play the game for a few matches—and you’ll witness endless complaints about this version’s terrible respawn system. Activision Blizzard clearly switched to a respawn system that favors proximity to your teammates over safe entry. As a result, you’ll often wind up spawning to an enemy mowing down a teammate directly in front of you, then you immediately after. It’s especially bad if the game’s just-as-terrible matchmaking feature pairs you up against a squad of bunny-hopping esports wannabes decked-out in CDL skins who are able to lock your team down in your respawn area.

The respawns are straight infuriating on the larger maps—Activision deeply needs to consider reworking the mechanic, because it’s trash—but in Shipment, all you can do is laugh and hop back into it. Grinding the Shipment 24/7 playlist over the weekend helped take the sting out of the all-too-occasionally wonky spawns you encounter in larger maps. It’s brought joy to Call of Duty: Modern Warfare 2 at a time when I was starting to feel burnt out.

The specific way Activision introduced Shipment last week helped alleviate some of my other complaints, too.

Call of Duty: Modern Warfare 2’s matchmaking system feels overly punishing in its quest to keep all players around a 1:1 kill:death ratio. Woe unto you if you have a few good games, because you’ll be cast into hell with those sweaty CDL wannabes for several rounds and get absolutely stomped. It’s another massive complaint on MW2 forums—but Shipment is so utterly nuts that you don’t feel its effects whatsoever. When everyone is spawning in with enemies in sight, everyone dies all the time, regardless of skill level. It’s a hoot.

Launching Shipment on a double XP weekend also helped me with a part of the game I especially dislike—weapons attachments. I usually stick to shotguns and light machine guns in game. I don’t care about trying to level up every weapon in every category. But in MW2, some of the stat-boosting attachments for your guns only unlock if you level up entirely different types of weapons. It sucks. I don’t want to level up assault rifles just to get a snazzy laser for my one-hit-kill Lockwood shottie setup. I just want to hang with my homies and eviscerate folks with my shotgun. Rather than force myself to play with weapons I don’t like, I’ve simply sighed and accepted I won’t have the attachments I’d like to have.

Again, COD vets are used to grinding gun camos on Shipment—but it was spectacular for finally unlocking those missing attachments too. Shipment is so gloriously wild that any gun is fun on it. So I tuned my class to maximize experience gains via decoy grenades and scorestreaks over kill streaks, loaded up select weapons that offered the specific attachments I wanted (and previously thought I’d never get), and went absolutely ham. Since Thursday I’ve maxed out all my shotguns, all my LMGs, a couple sniper rifles, several starter assault rifles that unlocked additional LMGs at higher levels, and then those LMGs, hoovering up endless glorious attachments in the process.

Shipment is so small that decoy grenades give you XP when your teammates kill enemies basically anywhere on the map. With scorestreaks active and double XP, I was getting anywhere from 4 to 8 levels on my primary gun per match. I could take a fresh gun and max it out over lunch. Yes, please.

Of course, while Shipment’s chaotic existence papers over MW2’s most egregious flaws, it doesn’t actually fix any of them, and you’ll feel the pain during regular matchmaking. (Shipment also drives home how deeply broken Riot Shields are when you use the Overkill perk to keep one protecting your back.) There’s still a lot of work to be done. But all that said, playing Shipment 24/7 during double XP weekend was an absolute blast—the best time I’ve had in Call of Duty: Modern Warfare 2 since its opening weekend.

A special Christmas Shipment map opens on December 21 and lasts through January 4. Bring on the Christmas noobs—I’m feeling reinvigorated and my laser-like Lockwood 300 is hungry.