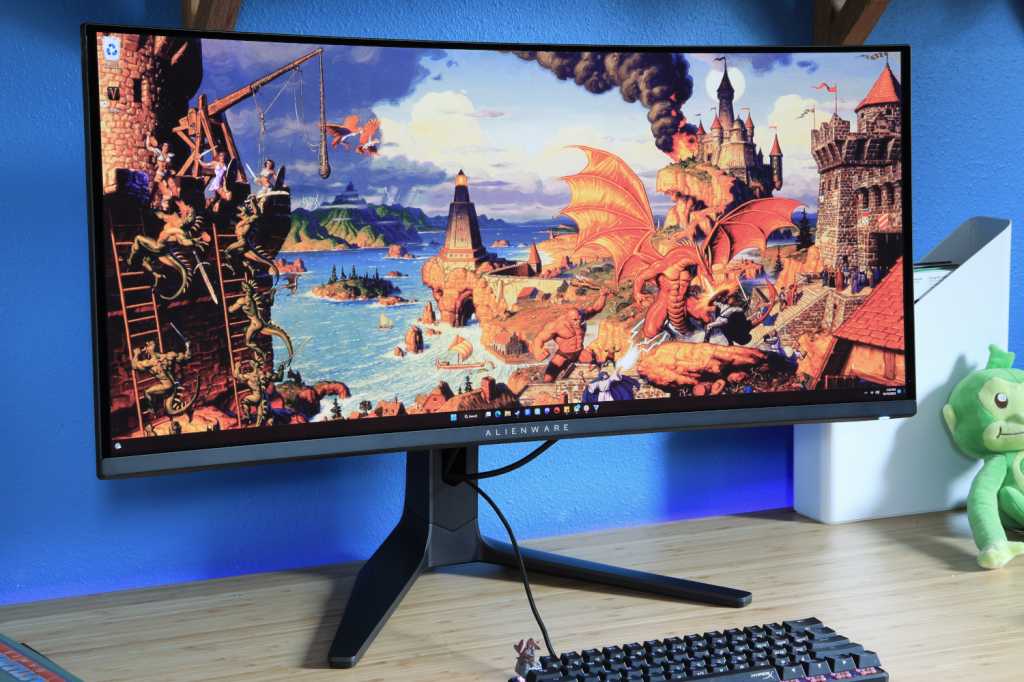 The Alienware AW3423DWF improves on its predecessor, yet slashes the price by $200 to just $1,099. In short: The best ultrawide gaming monitor money can buy is even better than before.

Alienware’s AW3423DW, the world’s first ultrawide OLED gaming monitor, demolished its competition when it arrived in early 2022 at an MSRP of just $1,299. Though still expensive, it undercut competing OLED and Mini-LED monitors by hundreds of dollars. Yet Alienware apparently was satisfied with that, and has launched an even less expensive follow-up: the AW3423DWF. It has most of the features of its predecessors but lowers the price to $1,099.

Note: This review is part of our ongoing roundup of the best monitors. Go there to learn about competing products, what to look for in a monitor, and buying recommendations.

The Alienware AW3423DWF is extremely similar to its predecessor, the AW3423DW, which is still sold today. So, what’s the difference? It all comes down to adaptive sync.

Alienware hasn’t changed, updated, or improved the design of the AW3423DWF over its predecessor aside from one noticeable exception: This model is only available in black, while the older model is only available in white. The black colorway looks less premium than white, mostly because it lacks the two-tone motif of the white model, which uses both white and black panels to contrast elements of the design.

It’s merely a difference of style: The new monitor seems just as well-built and sturdy as the prior model, which is good news. This is a hefty beast for its size, with thick plastic panels and a large stand. It’s among the most robust and attractive monitors available today.

The stand adjusts for height, tilt, and swivel, and pivots a few degrees in either direction. It’s also heavy enough to keep the monitor planted and dampen movement should you accidentally bump your desk. However, it retains a problem found with its predecessor: The stand is too large and deep, so the display sits a bit closer than expected. Alternatively, the monitor has a standard 100x100mm VESA mount for attaching a third-party monitor stand or arm.

You’ll find two DisplayPort 1.4 connections and one HDMI 2.0 on the AW3423DWF’s rear. This is an improvement over the earlier, more expensive AW3423DW. Why? HDMI 2.0 can only handle a refresh rate of 100Hz at the monitor’s native resolution. Swapping an HDMI to DisplayPort opens the option to add a second PC input at the full 165Hz refresh rate.

The monitor has a total of four USB-A ports, two of which are on the monitor’s front lip for easy access. They’re driven by a USB-B upstream port. USB-C remains absent from the monitor. That’s a forgivable problem for a gaming monitor, but at least one USB-C input would be preferred.

Alienware’s menu system relies on a joystick crouching behind the center of the bottom bezel. It’s easy to access and responds quickly to input. The menus are well labeled and sorted, too, making them easy to navigate.

The monitor offers a healthy range of image-quality adjustments including sRGB and DCI-P3 modes, several color temperature and gamma adjustments, and RGB color adjustments for hue, gain, and saturation. There are a few annoyances: for example, the color temperature modes don’t seem accessible with other calibration options. Still, these options should help creators adjust the monitor to their needs, which is good news if you want to use the monitor for professional photo editing, video editing, or graphics design.

The previous Alienware AW3423DW’s image quality was excellent, landing it at the top of our list of the best gaming monitors. The AW3423DWF lives up to the standard it set. It has the same QD-OLED panel and delivered identical performance in testing.

The Alienware AW3423DWF’s SDR brightness comes in at 250 nits, a smidge higher than the 246 nits of the prior model. This is a healthy level of SDR brightness for an OLED monitor. It’s higher than typical of 42-inch and 48-inch widescreen displays, like the Acer Predator CG48, and ties the Corsair Xeneon Flex 45WQHD240. That’s an important point, as the Corsair monitor uses the LG panel that will be found in a variety of 27-inch 1440p OLED monitors through 2023.

However, 250 nits isn’t bright when compared to the Asus ProArt PA348CGV, our favorite ultrawide monitor without OLED or Mini-LED technology. The Alienware also has a glossy display coat that amplifies reflections. A bright light source, like a sunlit window or 60-watt equivalent LED bulb, can make viewing uncomfortable. OLED remains best for dark rooms with good light control.

The contrast ratio knocks it out of the park with an effectively infinite ratio. The exact contrast ratio an OLED panel boasts can vary (Alienware claims 1,000,000:1), but this number is not a useful guide. In practice, all of the OLED monitors in the graph above achieve a visually perfect black level in a dark room.

The Asus ProArt PA348CGV, which has an edge-lit LED backlight with only a few dimming zones, achieved a much lower maximum contrast ratio of 1120:1. That’s pretty good for a monitor in its price bracket, but the difference between it and the Alienware AW3423DWF is obvious. The Asus ProArt looks hazy and foggy in dark scenes, which saps drama from dimly lit movies, like The Batman, and darker games, like Diablo II: Resurrected or Resident Evil Village.

Color gamut is a perk, as the Alienware AW3423DWF achieves over 100 percent of sRGB, 99 percent of DCI-P3, and 95 percent of AdobeRGB. Higher is better in this test, and the Alienware hits the highest marks among similarly priced monitors. These results are remarkable given its competition: All of the monitors in the graph above are top-notch performers.

In everyday use, gaming, and movies, this leads to an oversaturated and vibrant image that looks superb in most situations and stands out in bright, colorful content like Overwatch 2 or Pixar’s Rio. The wide gamut is also suitable for virtually all content creation: Those who want better performance will need a high-end professional monitor like the $3,500 Asus ProArt PA32DC OLED.

Color accuracy is excellent, as well. It technically scores as less color accurate than the prior AW3423DW, but differences of this amount are not generally noticeable. In fact, all of the monitors on the graph above are accurate enough that they could be used for a wide variety of professional workflows, and all look realistic in daily use and entertainment.

The Alienware AW3423DWF did well in gamma and color temperature testing. It presented the preferred gamma curve of 2.2, which means content looks about as bright as expected, and hit a color temperature of 6200K, which is slightly warm but not too far off the target of 6500K. The result is a pleasant, inviting image. As mentioned, the monitor offers several gamma preset modes and color temperature modes, so some calibration is possible for those who prefer different settings. 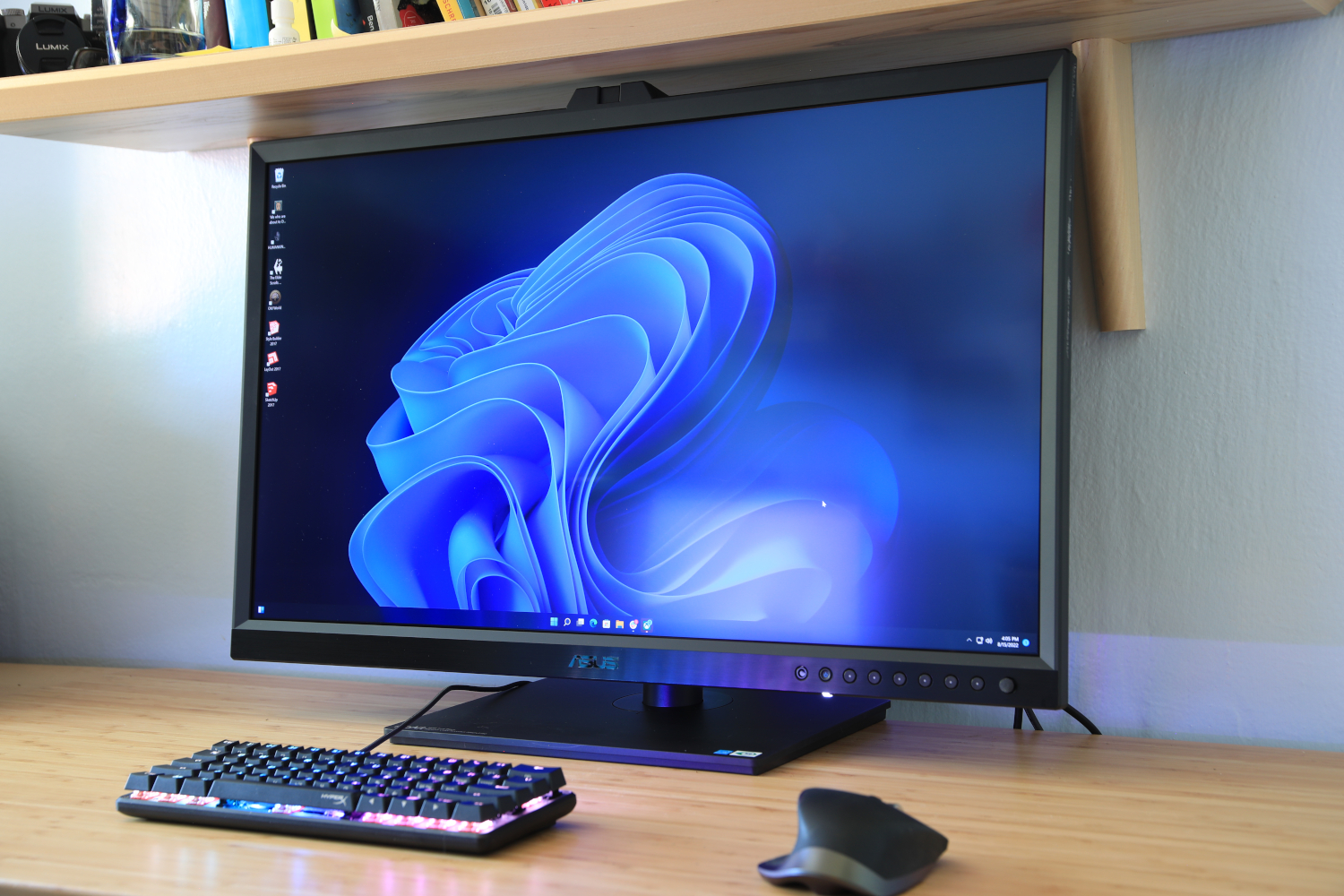 While the AW3423DWF has excellent image quality overall, it suffers a problem found in its predecessor: mediocre sharpness. The monitor’s resolution of 3440×1440 works out to about 110 pixels per inch. That’s nearly the same as a 27-inch 1440p widescreen but way below a 27-inch 4K monitor, which packs roughly 163 pixels per inch.

The QD-OLED panel also has an uncommon triangular RGB subpixel layout. Windows does not expect this layout and, as a result, there’s some fringing and pixelation around small fonts and interface elements. It’s not a dealbreaker, but it can make fonts less attractive and more difficult to read. The problem is much less obvious in games, which tend to have larger fonts. That said, the Alienware AW3423DWF looks brilliant—in fact, I subjectively like it more than I did when I reviewed its predecessor, the AW3423DW. I’ve had the chance to test a lot of competitors to Alienware’s OLED in the past year and found that while most are excellent, none of them beat the Alienware’s QD-OLED panel overall (except for the Asus ProArt PA32DC, but it’s in another league entirely). On balance, the AW3423DW and AW3423DWF have the best SDR image of any OLED monitor available for $2,000 or less.

The Alienware AW3423DWF also delivers an HDR experience that, while not perfect, is much better than its predecessor.

First, the bad news: This is an OLED display and, like most OLED panels found in monitors to date, it can’t display extreme levels of brightness. I measured a maximum full-screen HDR brightness of 306 nits, and a maximum brightness of 453 nits when only 10 percent of the display was lit. LED and Mini-LED displays often achieve and sustain 500 to 600 nits full-screen. This puts the AW3423DWF at a disadvantage when displaying extremely bright scenes, like a snowy mountaintop. It never looks as pure and brilliant as an LED-lit rival.

However, OLED’s contrast should not be forgotten. The monitor’s ability to achieve a perfect black level makes the brightness it can deliver appear remarkable in dark scenes. The neon signs of Cyberpunk 2077 seem to leap out of the display, while the starry skies of Interstellar are presented with tack-sharp accuracy. The Alienware AW3423DWF is perfect for dark, moody, high-contrast content.

The AW3423DWF also drastically improves on the brightness stability of its predecessor. My testing of the older AW3423DW revealed noticeable swings in the monitor’s brightness when transitioning between bright and dark scenes, or when moving bright windows across a dark background. It was a major distraction in day-to-day use. Alienware seems to have conquered these issues with firmware updates (and a quick browse through Dell’s support forums indicates users have noticed this, as well).

I also noticed the AW3423DWF has several HDR image presets that I don’t recall seeing on the prior model, including a custom color mode with six-axis customization. This is an exceptionally rare and much appreciated feature for a mainstream HDR monitor. Most HDR monitors lock image customization when HDR mode is turned on.

I’m still not entirely satisfied with the HDR performance of the Alienware AW3423DWF, but most of its problems are shared with other price-competitive OLED monitors. Mini-LED monitors are often better for HDR, especially if HDR brightness is a priority for you. Still, the Alienware AW3423DWF is a good performer overall and absolutely demolishes older monitors with edge-lit LED backlights, and it fixes the prior model’s flaws.

The Alienware AW3423DWF has a maximum refresh rate of 165Hz. This is a minor downgrade from the AW3423DW’s maximum refresh rate of 175Hz, but the difference is insignificant. Motion performance is excellent in general, with great motion clarity that makes small details in fast-moving objects visible. The OLED panel’s fast pixel response times preserve decent clarity even at lower refresh rates, so clarity is better than average even when the refresh rate is restricted to 60Hz.

Alienware is at a disadvantage compared to new 240Hz OLED monitors based on LG’s latest panel, however. Examples include the Corsair Xeneon Flex and the LG Ultragear 27GR95QE-B. These monitors provide better clarity in fine details. For example, character names in MOBA and MMORPG games are mostly readable when panning the camera on a 240Hz monitor, but not at 165Hz.

Even so, the AW3423DWF’s overall performance is great and should please a huge majority of gamers. It’s also a good choice for graphically demanding titles that can’t sustain a frame rate near 165Hz, nevermind 240Hz.

Should you buy the Alienware AW3423DWF?

The Alienware AW3423DWF is a fantastic ultrawide monitor that successfully defends its throne against recent OLED and Mini-LED alternatives. It delivers the same excellent image quality as its predecessor, fixes several of its flaws, and sweetens the deal with a $200 price drop. Make no mistake: This is the ultrawide gaming monitor to buy.