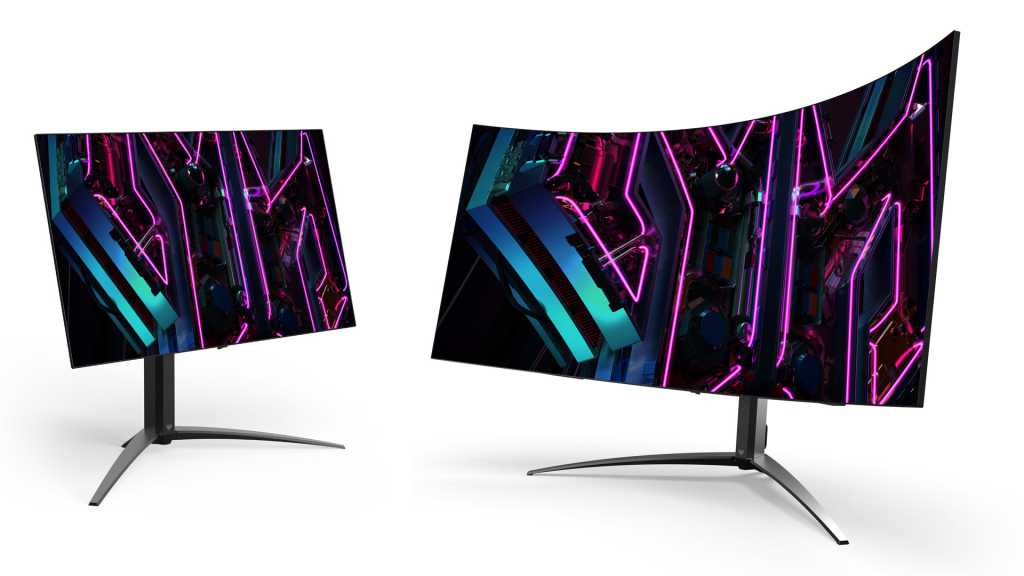 It’s taken a long time, but OLED gaming monitors are finally hitting their stride at the start of 2023. Take Acer’s long-running Predator series, for example. Later this year two new models, the X27U and X45, will bring OLED’s vibrant colors and high refresh rate to two of the most popular 1440p resolution ranges. The monitors are (shocker) 27 inches and a 45-inch ultrawide, respectively. This announcement comes right before CES.

Of the two, the X45 is certainly the more dramatic. It uses a 45-inch, 3440×1440 resolution panel — a fairly standard gaming res at a super-sized format. But even more eye-catching is the 800R curve, which is about as rounded as you can get before the thing is trying to tickle your ears. (Incidentally, that kind of super-round curve vertex probably isn’t for everyone; Dell and Asus are offering similar monitors in less extreme curved formats.)

The OLED panel isn’t quite up to graphic design standards with a 98.5 percent DCI-Pr color range, but its 240Hz refresh rate and .01ms response time should be more than enough for even the most intense gaming sessions. Peak brightness is 1,000 nits, and the display is compatible with AMD’s FreeSync tech (but not Nvidia’s hardware-based G-Sync) and it includes an integrated USB-C KVM switch for quickly hopping from laptop to desktop.

The X27U is a less bombastic design, a flat 27-inch 2560×1440 panel that should fit into more spaces and budgets. But its technology and connections are almost identical. Both monitors have incredibly slim bezels and a more sleek, tripod-style design for their monitor stands. The go on sale in Q2 2023 (that’s sometime from April to June), though China will get them a little earlier. The Predator X27U will cost $1,099, while the X45 will break the bank at $1,699.