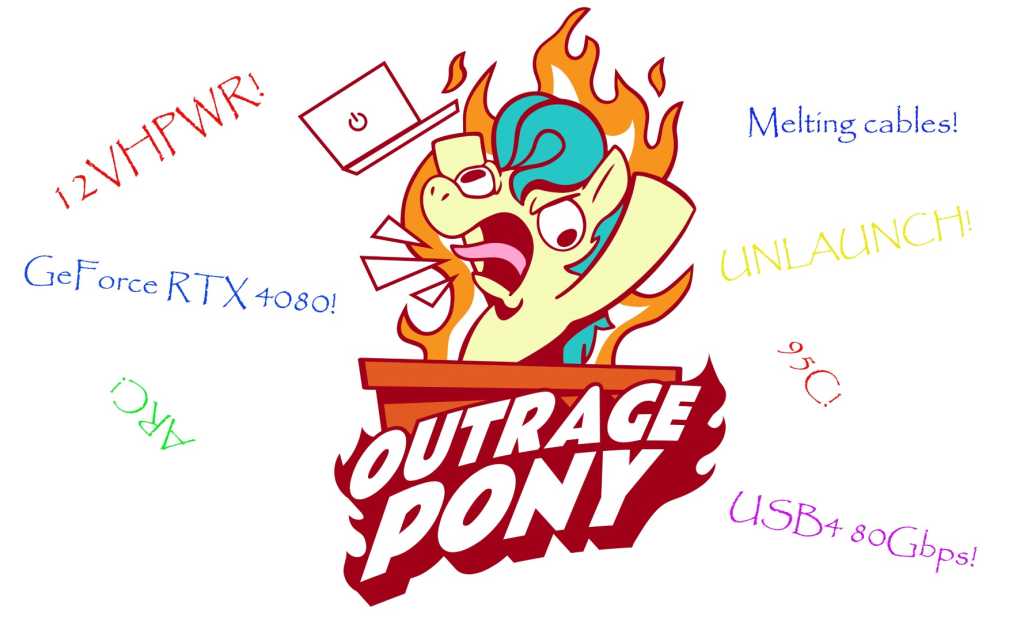 With the year winding down, I have a suggestion for a Nerd New Year’s resolution for 2023: Stop freaking out.

This year was a particularly banner year for freaking out too.

It started with AMD’s Radeon 6500 XT January launch which was an underwhelming GPU that left off a hardware media engine and had a limited four lanes of PCIe support.

In normal times, it would have been a terrible GPU to even launch. In the time it was released, however, when you could sell used, six-year-old, three-generation old GPUs for 90 percent of their original price—the Radeon 6500 XT was the only option under $250. It was essentially a bottle of the much hated and meme-worthy Dasani water you crawl up to in a desert. But rather than appreciate Dasani for being water you find in a dessert,  you instead selfie yourself pouring it into the sand so you can post it to Mastadon instead.

Little did we know, the year of outrage was just beginning after Radeon 6500 XT was made to walk naked before crowds while people threw defective power supplies at it and shouted “shame!” at it (that’s a Game of Thrones reference people.)

From Intel’s delayed and sputtering launch of Arc to USB4 V2 naming schemes, to the “high 95c” of Ryzen 7000 and “high-power consumption” of Intel’s 13th gen, the Ryzen 7000 not  being cheap enough, the launch of the GeForce RTX 4080, the unlaunch of the GeForce RTX 4080—every month was just another 30 days for people to howl at the moon over a product not meeting exactly what they expected of it.

The highlight was the mysterious and scary reports of Nvidia’s GeForce RTX 4090’s 12VHWPR connector melting in cards. Rather than wait for facts though, people immediately jumped to conclusions demanding a full product recall and venting outrage at what a defective design it was.

In the end, after 100,000 to 125,000 GeForce RTX 4090s were reportedly shipped—roughly 50 cards were reported to have experienced a melting connector. And all indications are the connectors aren’t made of wax but instead, they likely weren’t fully seated causing the melting failures.

Was that due to consumers not used to a new power connector? A design that made it less audible when locking in place or possibly something the new connector designers should have anticipated happening? The answer is likely all three in the end but when it first broke, angry villagers immediately grabbed their torches and screwdrivers and headed for the castle to destroy the connector, adapter cable and the card.

In a sign of just how misplaced all the anger was, the Nvidia 12VHPWR freakout went from full panic mode to “oh never mind” seemingly overnight.

I had thought seemingly months of consumers spinning up in anger over everything I could think of had finally run its course but in the last month of the year, yet another controversy appeared to cap the year off: AMD’s Radeon 7900XT and XTX shipping totally broken pre-fetch shader support and A0 silicon.

The claim of broken pre-fetch support was based on a query of the card’s capabilities  which proved it was broken at launch. As far as silicon goes, A0 indicates it was the first version, hot off the fab, which the Internet said was yet more proof that AMD had shipped a product not ready for consumers.

When asked to confirm the report (which is what a responsible journalist does) AMD told Tom’s Hardware’s Paul Alcorn that there was no broken feature. AMD had, like many hardware makers, included an experimental feature for developers to access. More importantly, AMD told Alcorn the pre-fetch functionality in the new GPU is working exactly as intended.

But what about AMD’s A0 silicon that would indicate it shipped to consumers with no tweaks? The company said that’s just how it was and its Radeon 6000 series were actually also on A0 silicon and its Radeon 5000 were mostly on A0 as well.

In other words: An indication of A0 silicon isn’t an indicator of buggy hardware, but as, respected chip analyst Dr. Ian Cutress noted on Twitter that it’s actually an indicator of impressive work by AMD’s engineers—not something to use as a cudgel.

“Anyone shipping A0 silicon is a *!@#*&^ machine. It’s godlike,” Cuttress Tweeted. “The simulation and manufacturing prediction met the product design first time! To everyone saying ‘unfinished’, then you just shat on 5,000+ engineers that got a shiny electric rock to work at retail on day one.”

Anandtech’s editor Ryan Smith echoed the statement saying: “Being able to ship a 300mm2+ chip with A0 silicon is absolutely damned impressive”

The lesson here? You don’t have to jump immediately to 11 all the time.

And frankly, I’m worn out by the shrieking everyone does immediately.

Don’t get me wrong either, it’s not that an unconfirmed report of a problem in a new piece of hardware or software should be given a pass and the companies should be allowed to do what they will. In fact, consumers and the media need to call them on the carpet for it.

What I’m arguing for is every nerd, everywhere to slow your roll from 1 to 11. When there is a report of what looks like a serious issue—it should be covered and talked about to make sure it’s properly addressed with the facts hopefully surfacing to all.

If all this isn’t enough to sway you to not immediately mount your outrage pony at the next whiff if a problem, let me remind you of the story of the nerd who cried wolf. You know, the classic story where the nerd crying wolf and sending the Internet into a panic eventually got the Internet to simply ignore the nerd’s cries. And when the wolf finally had something worth screaming about—the Internet just ignored it because it was yet another false alarm.