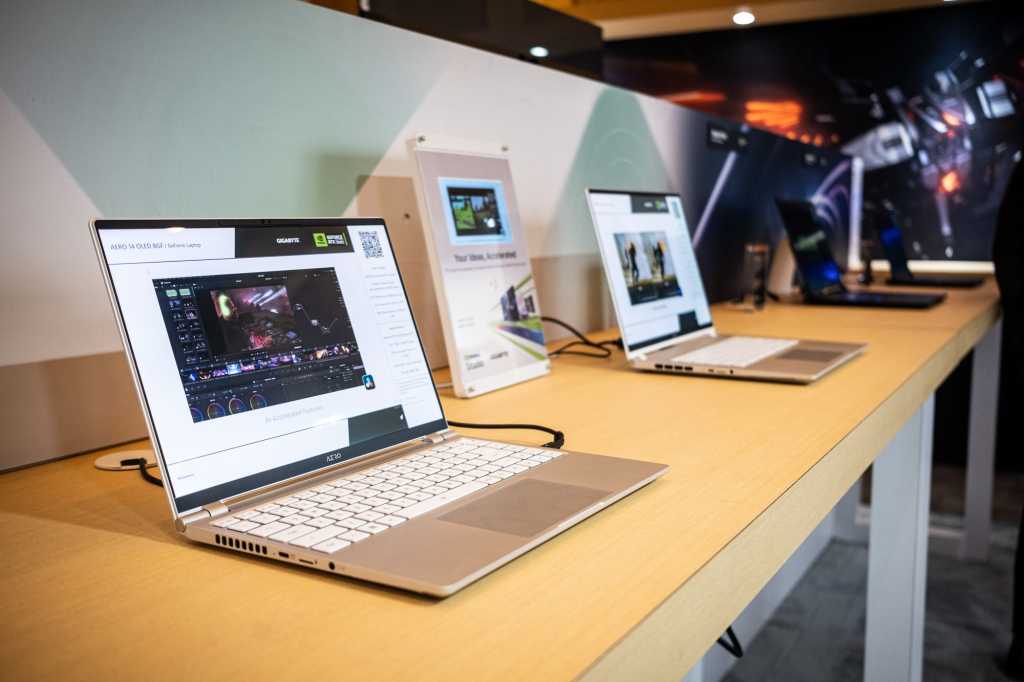 If you like rear-mounted laptop ports and prefer USB-C charging to a proprietary barrel charger, then Gigabyte may have what you’re looking for in 2023.

At CES 2023, we had a chance to check out Gigabyte’s upcoming laptop lineup, beginning with the Aero 14 OLED and extending through to the Aero 16 OLED, and Gigabyte’s two gaming laptops, the Aorus 17X and 15X.

Remember, the USB-C power delivery (PD) standard has increased to 240 watts, and that has opened up new avenues for laptop makers to improve their products. The Aero 14 OLED only requires a 130W charger, but that doesn’t have to necessarily provided by Gigabyte, either — any new charger that supports the power standard will do. (So far, Gigabyte and other laptop manufacturers seem committed to shipping those chargers alongside those laptops, unlike some smartphone manufacturers. Let’s hope that continues.) But that also includes a discrete Nvidia GeForce RTX 4000 GPU option as well as a 13th-gen Intel CPU, all with a “standard” USB-C charger.

Hey, as executive editor Gordon Mah Ung notes, “I would probably trade my normal laptop for something this classy.”

We’d be remiss if we didn’t point out some improvements Gigabyte has made as well. Sure, there are Thunderbolt 4 ports mounted along the side of the chassis, but there are also USB-C and HDMI ports mounted on the rear of the chassis. That can be a little awkward when it comes to actually inserting the cable, but far more convenient during the other 99.99999 percent of the time, when you’re actually using it. And yes, white keyboards are a plus!

We’re also continuing to see the trend of more and more OLED panels manifest themselves within the Aero lineup, though the new Aorus gaming laptops appear to have stuck with other display technologies instead to achieve the high refresh rates. But the now-standard RGB lighting is splashed all over Gigabyte’s new laptops, too.