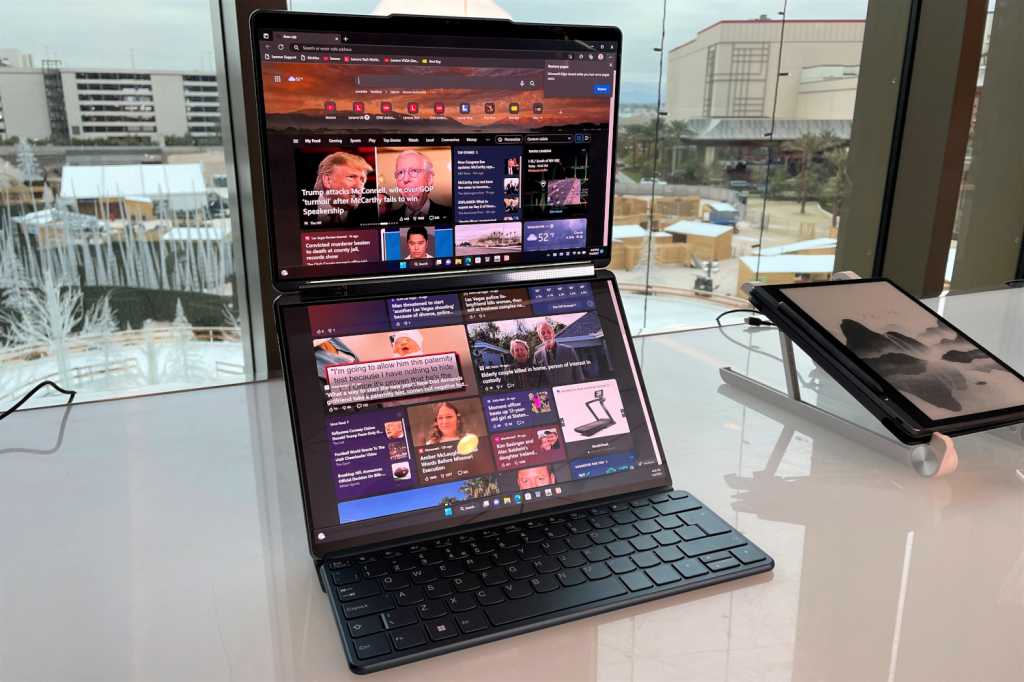 There’s nothing more exciting to me than a laptop with unique features or an out-of-the-box design. While a slew of brand spanking new laptops were announced at CES this year, there were some that really stood out from the rest. From RGB keyboards on Chromebooks to portable laptops so thin and lightweight they practically float away, I’m dying to try each and every one of them. Let’s get into then, shall we?

Looking for more laptop options? Check out our roundup of the best laptops available today.

Chromebooks are great for those who want a no-frills machine. Personally, I use one for writing and editing as well as web browsing and watching YouTube. However, as the years march on, Chromebooks are evolving and becoming more than just basic everyday machines.

Enter the Asus Chromebook Vibe CX43 Flip. It’s a cloud-based gaming Chromebook with an RGB keyboard. Initially, I was drawn to the all-white chassis and the orange WASD keys. It definitely looks like a gaming laptop, but with a more elevated style. The screen even swings around 360-degrees, which means you can use it like a tablet.

The top-tier configuration rocks an Intel Core i7-1255U CPU, Intel Iris Xe graphics, 16GB of RAM, and 512GB of PCIe NVMe SSD storage. I haven’t tested this one yet, but given the hardware, I suspect it’ll deliver peppy performance (though such a sizable SSD might not be needed in a notebook focused on cloud gaming). The 14-inch 1200p display has an aspect ratio of 16:10 and is touch-enabled. The taller 16:10 aspect ratio is perfect for scrolling through documents and such. Plus, Asus even includes a pen in the package.

No word on pricing yet, but the Vibe CX43 will be available to buy in the first quarter of 2023. To sweeten the pot even further, the manufacturer is also bundling a SteelSeries Rival 3 gaming mouse with it.

HP’s Elite Dragonfly line of laptops are designed with business professionals mind. They’re luxurious, lightweight, and expensive. This year at CES the manufacturer unveiled consumer-friendly versions of their business-oriented laptops. That’s where the HP Dragonfly Pro Chromebook comes in.

The Dragonfly Pro Chromebook has two standout features: a ridiculously bright display and an RGB keyboard. The RGB keyboard is unique because it’s a non-gaming laptop. If you like a bit of flair, then this is good news for you. HP also claims the 14-inch 1600p touchscreen display has a maximum brightness level of 1,200 nits, which is wild. If that number holds true, then this display should produce an incredibly vibrant picture. Inside the chassis, you’ll find an Intel Core i5-1235U CPU, 16GB of RAM, and 256GB of SSD storage. That’s enough power for day-to-day tasks like checking e-mail, watching Netflix, and so on.

I couldn’t believe what I was seeing when I saw the LG Gram UltraSlim from the side. It’s practically paper thin. The width is a mind-blowing 0.43-inches and the weight is a jaw-dropping 2.2 pounds. This thing is so lightweight, it may float away if you’re not careful. It’s also packing some seriously powerful internals.

The UltraSlim features an Intel Core 13th-gen Raptor Lake chip, Intel Iris Xe graphics, up to 16GB of RAM, and up to 1TB of SSD storage. The luscious OLED display measures a roomy 15.6-inches and has a resolution of 1920×1080. That means the picture should be both crisp and vivid.

I love it when laptop manufacturers push the boundaries of design and that’s exactly what LG is doing here.

The idea of an e-ink display on a laptop is positively thrilling to me, as I regularly suffer from eye strain. E-ink displays are commonly found on e-readers and are easier on the eyes. That’s why I definitely want to try out the Lenovo ThinkBook Plus Twist. This unique machine has two displays: one 13.3-inch 1800p OLED touchscreen and one 12-inch e-ink panel. You can switch between the two by spinning the screen, which sits on a 180-degree rotating hinge. The e-ink display is front-lit and is in full color. The hardware is fairly impressive, too.

The ThinkBook Plus Twist features 13th-gen Intel processors, up to 16GB of DDR5 RAM, and 1TB of 4th-gen SSD storage. Based on the specs alone, I expect performance to be zippy, especially during general use tasks. We’ll know more when we run a couple of benchmarks on this machine. Personally, I’m curious to see whether the e-ink display saves on battery life or not. My personal Kindle has an e-ink display and it lasts quite a while on a single charge.

The Lenovo YogaBook 9i is as compelling as it is confusing. When the manufacturer first revealed pictures of the laptop, I found myself staring and trying to make sense of it. It’s one of the few dual-screen laptops that can stand upright on its own. The two 13-inch OLED displays are connected via a hinge, which allows you to use it in several different 2-in-1 configurations. There’s even a detachable keyboard as well.

This thing is a bizarre sight, that’s for sure. It might be a good option for those who need a dual-display workstation, but I suspect this laptop is designed for a more niche crowd. Regardless, it’s very interesting and memorable. I’d love to see how practical or cumbersome it really is in everyday use.

These are the laptops I’m most excited to get my hands on, but they’re just the tip of the iceberg. For an even deeper look at the nifty notebooks coming down the pipe, be sure to check out our roundup of the 10 best laptops of CES 2023.