Like many longtime Flickr users, I was overjoyed at the prospect of Yahoo lavishing its fading photo service with some love after a prolonged period of not-so-benign neglect. The first step in Flickr's reinvention occurred in January with the release of Flickr 2.0 for iOS, and now Yahoo has let loose a wholesale overhaul of Flickr’s Web-based photo storage and sharing service—along with the release of an Android analog to its well-received iOS mobile app.

Yahoo has imparted a striking, bold look to the updated Flickr site, emphasizing social networking while showcasing large, high-resolution images and offering subscribers a whopping terabyte of free storage space. It’s a far cry from the utilitarian but tired interface of the past, which featured tiny thumbnails, vanilla text and links, and severely limited uploading options.

Whether you admire or despise the Flickr update depends in large part on who you are and what you expect from the photo showcase. As a photo enthusiast and Flickr subscriber since 2007, I’ve had my share of complaints about the service, and like many users, I've looked forward to this long-awaited upgrade. Here’s my first take.

The new Flickr home page for the Web in many ways echoes the front cover of the mobile iOS app, emphasizing social networking features. Two-thirds of the horizontal interface is consumed by enormous images from your contacts and also from unknown people whom Flickr thinks you will like. Meanwhile, links to Groups, Explore, the Flickr blog, and other potential contacts Flickr suggests are listed on the remaining right-hand rail of the page. With the raft of new photo-centric communities springing up, it makes sense for Flickr to toss its lens into that arena.

Flickr has the right idea in emphasizing large photos. While some critics think the presentation is too brassy and in your face, I don’t agree. Wall-to-wall images on a photo site? Sounds good to me.

The old Flickr, while tastefully conservative, suffered from too much white space and small type, and offered limited opportunities for rearranging the layout. The new design has somewhat rectified this: Images are larger, but the opportunity to change the layout is still limited.

The new home page only lets you see your contacts' new images without letting you decide what you would rather see first. Call me egocentric, but I would rather have the site open to my own photosets than solely images from my contacts—it disorients me to go to Flickr and see nothing but images I don't recognize. To remedy this problem, you can click on the You link, which reveals your own photostream and a pulldown menu leading to sets, maps, favorites, galleries, recent activity, and stats. In other words: Much of the stuff you used to see first. But there really should be a way to choose this as the default opener.

The essence of the new presentation is the You section. The photostream loads all of your images in large blocks, endlessly as you scroll down. Click on any individual image and it opens in a lightbox view with arrow navigation, resembling the black-bordered mobile app interface, and letting you favorite it, add a comment or view it full screen. A button lets you view a glorious full-screen slideshow.

I was especially pleased with the new Sets page, which showcases each of your sets in large, easy-to-read modules. Strangely, though, the same old-fashioned white space with blue links appears at the bottom. The Edit module looks like a page torn exactly from the previous version of the site, except with the cover photo at the top.

Some pages in the You module seem like hybrids of the old and the new design, which gives the new site an unsettling half-finished look and feel. It’s like someone painted part of the house while leaving the other half for later. These pages sport the new cover photo at the top and images in a large, pleasing grid, but the bottom of the pages resort to the same white background and links that they always had. Some users lament the new concentration of information away from EXIF and metadata toward a more social orientation and not immediately seeing information and comments they used to see at a glance.

Unfortunately, there appear to be fewer ways to alter the view of your photo sets or to view sets with the photostream, and that's a disappointment. Hopefully, as Yahoo engineeers revisit the interface, they'll enhance presentation flexibility.

If you already have a Pro account, read the FAQ carefully to figure out where your current Pro account leaves you. First, Flickr says that subscriptions are unchanged. But it also lets you switch to a free account before August 20 to become eligible for a pro-rated refund. But if you were already willing to fork over $25 for a yearly Pro subscription, you’ll now get more for your money.

Whereas the Pro account offered unlimited storage at 50MB per photo, the free account now allots 200MB per photo. The previous pro account included unlimited video uploads of up to 90 seconds at 500MB per video, whereas the new free account is more video friendly with 1080p HD video totaling 1GB and playback up to three minutes. While the new account lets you upload and download in full resolution, the older subscription limits image size download for other users. The Pro account is ad free with access stats and referrals. The new Flickr account has ads (unless you buy the $50 per year version of the service) and does not offer stats. 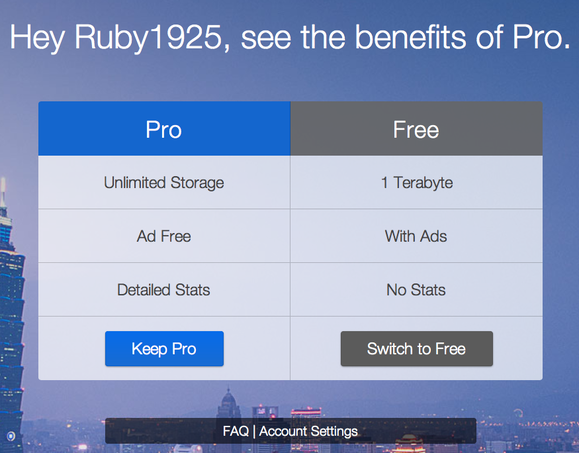 Flickr isn't selling Pro accounts anymore, but people who already have them may keep them indefinitely as long as they continue to pay the $25 annual fee. That means anyone who already has a Pro account, can keep it, along with unlimited storage, stats, and ad-free viewing. Significantly, Pro users photo and video limits will be upgraded to the current standards. Not too shabby.

Despite its improvements, some of Flickr's site operations are glitchy. For example, Flickr wants you to upgrade your user icon, but when you click to find a new image, it offers up a small fraction of your photoset to choose from. The only remaining way to get a fresh image for your signature ID is to upload a new image.

Flickr lets you choose a cover photo, in the same style as Facebook. However, I wish the image editing function of the cover photo more closely resembled the one in Google+, which allows images that are deeper than Facebook, without cropping.

While some popular front-facing pages sport the Flickr upgraded look, many of the back end pages have the same old look—the small thumbnails, the abundant white space. Similarly, uploading and creating sets still has the same confusing interface as it did before.

And, unfortunately, the new Flickr seems slower. All of those large images on consumer-grade Internet connections take their toll on speed.

What do you say?

Whether or not you like or approve of the new Flickr redesign, it’s hard to fault Yahoo for trying something new. It may be that the new Flickr is a bit more consumer- and more social network-oriented than its previous incarnation, which was initially geared more toward the professional crowd. While the redesign can be a bit jarring at first, I found myself getting used to it quickly, and appreciating its photo orientation and large imagery.

I suspect that this is Flickr's first foray into improving the site. I hope to see more polish and flexibility added in upcoming versions.