See More Hand-Picked Deals
Nvidia’s GPU Tech Conference is evolving to have an even stronger emphasis on high performance computing than the past couple of years. Yes, there are token nods towards the consumer side of the business--Cyberlink is at the show, demoing 3D Blu-ray--but that’s about it. PNY is here, but showing its Tesla and Quadro based professional solutions.

Even the papers leaning towards more practical uses tend to seem academic. Take, for example, “GPU Accelerated Marker-less Motion Capture.” This is a Stanford University project that addresses how to accurately capture real-life motion of humans and animals without having to attach pesky, reflective markers. This is useful in animation and movie making, but could also prove useful in surveillance applications, but it sure sounded dry.

Wandering around the San Jose Convention Center show floor, the exhibits tended towards high performance computing applications and hardware as well. The MicroWay WhisperQuiet Tesla Personal Supercomputer was pretty much the average system on the floor: 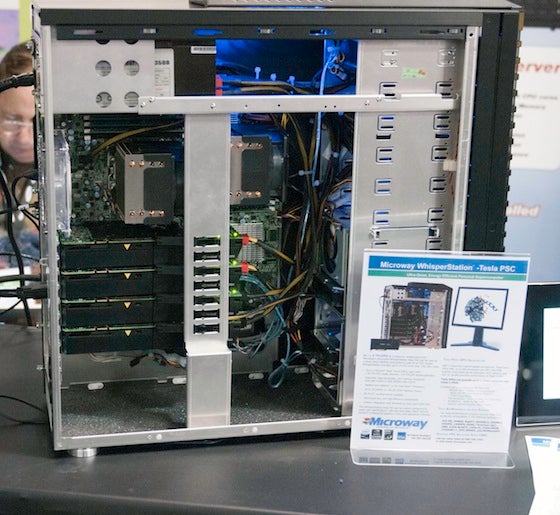 Even gaming applications like competitive online racing seemed to emphasize a more professional bent. This is not your father’s NASCAR Racing game: 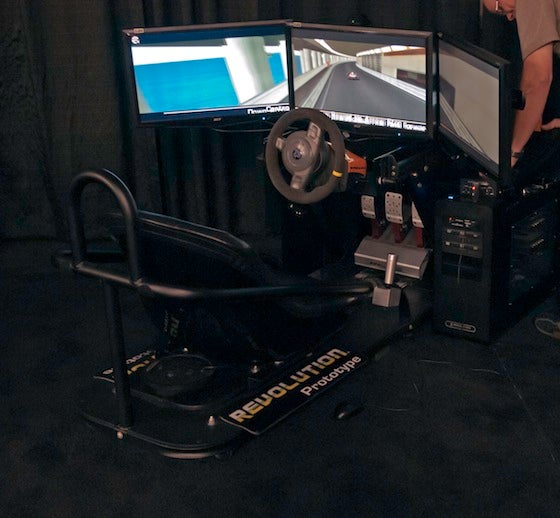 I notice that in the keynote, the atmosphere was more muted. There was cool stereoscopic 3D stuff, most of the time was taken up with relatively esoteric discussions of ray-traced renderers, details about physical simulation using ANSYS and several other interviews in a similar vein. Gone were the punchy jibes at competitors from Jen-Hsen Huang that have punctuated the news coming from past GPU tech conferences.

Maybe that’s how it should be. As Nvidia responds to competitive pressures, it’s natural to move into areas not served by competitors. AMD’s graphics group certainly has some presence in professional graphics through its FireGL line of graphics cards, but its penetration into the compute segment served by Nvidia’s Tesla products is miniscule.

Intel’s Sandy Bridge CPU line, slated to ship early next year, will put pressure on Nvidia’s entry level GPU products. Consumer level applications, like video transcoding, will be very well served by Sandy Bridge. At least one observer commented that Sandy Bridge’s video encoding is much faster than anything by Nvidia and possibly better quality. If Nvidia can’t compete with entry level, it’s natural to move higher up in the product food chain.

And although the tone this year seems more sober and serious, it’s also a more mature tone. Announcing a road map that goes out for three more years implies a fairly rigorous product planning process – although once again, that roadmap focused on GPU compute – no roadmap of the mobile Tegra processor line was evident.

As Nvidia, AMD and Intel jockey for position in the various market segments for visual and high performance computing, it’s increasingly clear that Nvidia is also dependent to a great degree on Intel. Intel logos were quite visible at a number of booths in the GTC trade show, and Huang suggested that the CPU and GPU would not only co-exist, but co-operate in the high performance compute space going forward.

Perhaps the final irony at this year’s GPU Tech Conference was the tiny booth occupied by SGI. The former workstation giant, at which many of Nvidia’s leading architects and engineer cut their teeth years ago, is now an outlet for Tesla-based compute servers. SGI’s presence is perhaps a sobering reminder of how even high flying tech giants of the past may one day be just a small exhibitor depending on some upstart’s product line.