No two Apple products share a closer parallel history than the original iPhone and the original Macintosh computer. Each device was revolutionary for its time. The Macintosh, later known as the Macintosh 128K, was the first mainstream computer to include a graphical user interface similar to the ones we use today. The original Mac OS used movable application windows and included functions such as drag and drop. The 128K also popularized the use of a mouse and was notable for its compact dimensions. The iPhone was the first minicomputer to masquerade as a cellular telephone. It also had an intuitive, exclusively touch-based interface with limited physical buttons and no stylus--a common device for touch-based phones prior to the iPhone.

Both products were also guided by principles of easy-to-use software and cool design aesthetics, and by a willingness to sacrifice functionality (such as multitasking) to boost overall performance.

So how does Apple's original landmark product, the Mac, compare to the current version of the iPhone? Let's take a look.

Today, Apple sees its mobile future in the company-designed 1GHz A4 system-on-a-chip (SoC) first introduced with the iPad. The A4 combines into one chip a low-powered central processing unit and a graphics processing unit that can render 720p video. Previously, both the CPU and the GPU were separate hardware pieces.

Apple has been steadily placing the A4 chip in all of its iOS-based devices including the iPhone 4, the iPad, the fourth-generation iPod Touch, and the newly announced Apple TV. 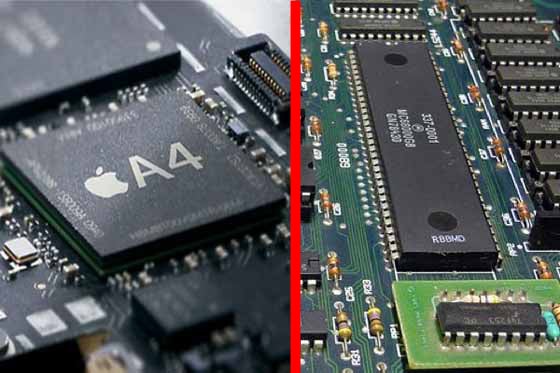 Zoom out from the processors and you can take a look at the logic board for each device. The iPhone 4's logic board houses 512MB of RAM and either 16GB or 32GB of Flash storage (depending on the model), as well as the iPhone 4's three-axis gyroscope and GPS chip, according to online DIY guide iFixit.

The 128K's much larger logic board contains just 128KB of RAM, 64KB of read-only memory (ROM), and no internal storage. The Macintosh logic board measures 8.75 inches by 8.75 inches, according to Herb Johnson, a New Jersey-based classic computer reseller. To put that size into perspective, you could fit about 7.37 iPhone 4 units onto the surface area of the Macintosh 128K logic board.

In lieu of a hard drive, the 128K relied on 3.5-inch floppy disks that had a maximum memory of 400KB. A single disk had enough space to house the operating system (216KB), one application (MacPaint occupies 68KB), and some user-generated files.

"The 128K Macintosh without a hard drive was really torturous to use," Vern Raburn, a former Microsoft executive, told PCWorld in an interview in 2004. "The good news was, at least the floppies were sturdy, because you put them in and out a lot." 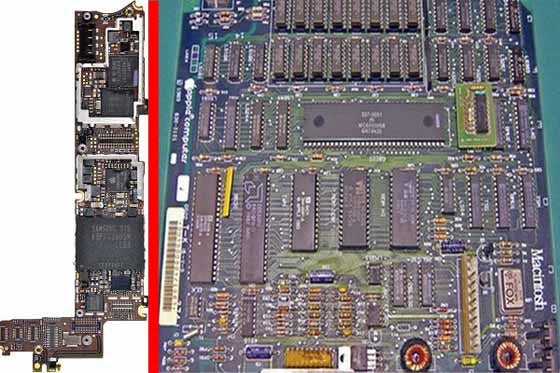 NEXT PAGE: Screen to screen, Inside views, OS matchup