The iPhone 4 features a 3.5-inch-diagonal screen with 960-by-640-pixel resolution at 326 pixels per inch. The original Macintosh had a monochrome 9-inch-diagonal display with a 512-by-384-pixel-resolution bitmapped display. The iPhone 4's screen is a liquid crystal display (LCD), while the 128K had a cathode-ray tube (CRT) fluorescent screen. 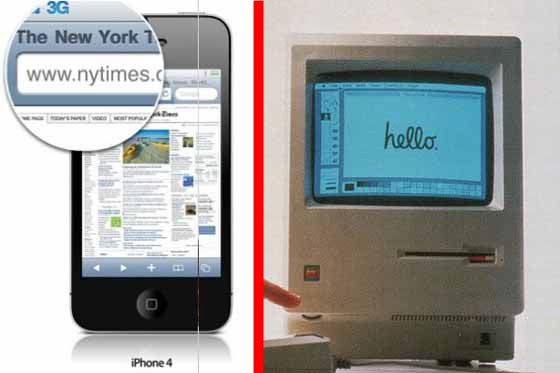 The iPhone 4 is a marvel of compact design, with almost no internal real estate wasted. In this photo, you can see the logic board just to the left of the iPhone 4's 3.7V 1420 mAh lithium-polymer battery--a battery 19 percent larger than the one previous devices used.

Inside, the 128K had a lot of extra space set aside to make accommodate the CRT monitor. 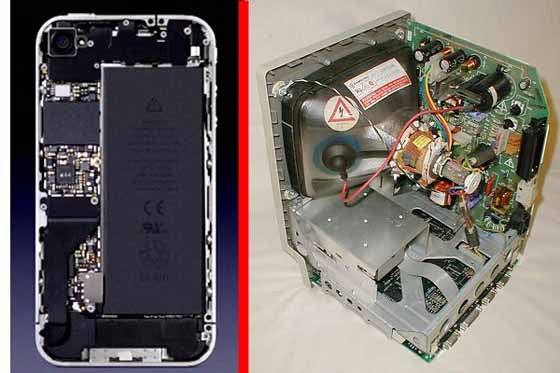 Both the iPhone operating system and the 128K OS launched without multitasking. When the 128K came out you could do only one thing at a time on the machine. If you wanted to switch applications you had to insert a 3.5-inch floppy to load the new program. Apple sacrificed a lot of components typical in other computers, including RAM and storage space, to create a machine that was compact and affordable (by Apple standards).

You don't have to switch out disks on the iPhone, but until recently you could run only one application at a time on it. There were exceptions to that rule--for example, you could run the iPod and browse the Web simultaneously--but until iOS 4 launched in 2010, Apple didn't permit you to run more than one third-party app at a time. Despite Apple's recent changes, many observers have criticized the company for not supporting true multitasking on the iPhone.