Google takes a decidedly more puritanical view towards "naughty" voice searches than it does toward comparable typed searches.

By default, Google blocks voice search results that it deems offensive. Presumably, its motive has less to do with keeping you from cussin' than with shielding users from questionable content in the event that Google's software misunderstands their spoken request for "pictures of shih tzus," "chicken plucking contest," or "How can I get to Bangkok?" What could possibly go wrong, you ask? Just think of Google voice search as a spoken-word equivalent of autocorrect.

Anyway, if you vocally google the s-word, the search bar will populate with "s***" and will return a nonsense search for the letter "s," though you can usually find what you're searching for if you provide enough additional context.

Users can disable the software's voice search censorship in mobile search settings (though as far as I can tell, disabling it in the desktop Chrome browser is impossible), and of course there are no restrictions on inputting naughty words from a real or virtual keyboard for a standard Google search.

But in today's anything-goes, South Park culture, what words still qualify as dirty? Google has never issued an official public no-no voice recognition list, so we decided to try to create one.

In the end we were able to identify 21 words that Google voice search refuses to acknowledge. However, the company's standards for which words receives the asterisk treatment are wildly inconsistent. And some words that aren't censored are more inflammatory than some of the ones that are.

Note: The content below alludes to all manner of cuss words, sexual acts, and ethnic slurs. These terms are not part of my everyday vocabulary (in fact, I felt downright filthy after this exercise). Out of respect for our audience's sensibilities, we've tried to avoid naming or showing the actual terms, even the comparatively mild ones (but you probably won't have any trouble figuring them out). Feel free to add your own finds and opinions in the comments, but please exercise similar discretion.

The four-letter p-word for "urine" and "urinate" was one of the featured terms in George Carlin's infamous "seven dirty words" routine from 1972, but I was surprised to find this relatively mild term still being censored 42 years later.

Nevertheless, you can successfully search for some forms of the word that specifically refer to being angry or annoyed. Pissy, for example, appears asterisk-free, and the search will even provide a robo-spoken definition, along with a written dictionary description that labels the term "vulgar slang."

Here's a surprise: The three-letter a-word meaning "buttocks" gets a pass (maybe because it also means "donkey"?), but the b-word referring to the same body part gets blocked. Perhaps Google doesn't want to surprise users with results for butt when they want results for but, so it blocks butt altogether. It's a theory, anyway.

The seven-letter a-word that begins with the aforementioned three-letter a-word and has the meaning "anus" or "mean person" is censored, however.

Conversely, the b-word that refers to the same orifice is also blocked, even though it easily passes basic cable muster.

The plural four-letter t-word referring to female breasts (or to the Paridae, a taxonomic family of small birds that includes the various species of North American chickadees) gets covered up. But the longer version of the same word (which ends in ies and is never used to refer to small songbirds) gets through just fine.

Oddly, Google tolerates plenty of common (and crude) anatomical terms, including the four-letter d-word for male genitalia (short for "Richard") and the five-letter b-word (rhymes with "loner" and can also mean "blunder") for the same body part in its erect state.

The four-letter t-word referring to female genitalia (rhymes with "swat"), which most people consider vulgar, goes uncensored by Google: The search app's robo-voice automatically reads the word aloud, along with its definition (simply "a woman's genitals").

However, the terms for sexual acts that have the same ending but begin with hand or rim apparently didn't raise any red flags for Google.

The three-letter c-word referring to "orgasm" or "ejaculate" is out, though the similarly used four-letter j-word (the one that's a single letter off from "jazz") gets through without hindrance.

Google search declines to recognize the six-letter n-word. It also blocks the more casual five-letter version of the word that ends in an "a" (and often appears in song lyrics). 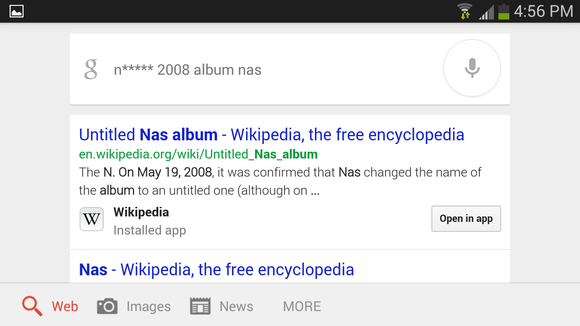 The seven-letter w-word aimed at Hispanics also gets censored. The common four-letter s-word slur is probably also forbidden, but I couldn't get my phone to recognize it at all.

The four-letter k-word slur for Jews is not blocked. Maybe that term has fallen out of favor among anti-Semites. As a Web-enabled person of Jewish descent, I'm subjected to occasional doses of anonymous venom, but that word has never come up.

How commonly used a slur is seems to be a key factor in Google's censoring decisions. In the post-9/11 United States, we've seen a rise in hateful language aimed at people thought to be of Middle Eastern descent. Perhaps in response to that trend, Google search refuses to countenance the seven-letter r-word and the nine-letter t-word that begin with rag and towel and are used as ethnic slurs.

One unintended side effect of this policy is to prevent users from directly voice-searching the excellent coming-of-age film Towelhead starring Aaron Eckhart, or the novel it was based on. A search for "t******** movie" will not return the film on the first page of results, the algorithm recognizes it as the nonsense search "t movie."

The six-letter f-word used a slur for a gay men is censored, and I assume that the shortened, three-letter version of that word is blocked too, though I couldn't get my phone to recognize it. Likewise, the ten-letter c-word (whose last six letters rhyme with "trucker"), used as a homophobic slur, is blocked.

The four-letter d-word referring to gay women doesn't get censored—perhaps because the term (in British English, anyway, it's commonly spelled with a "y") also has nonhateful meanings ("ditch" and "levee"). Or perhaps the word has been appropriated by the lesbian community as a prideful way to refer to themselves.

Many other common slurs seem not to have prompted Google to ban them, but we see no reason to mention them all here; just use your imagination.

Though we reached out to Google to ask how it decides which content to block in voice search, we have yet to receive a response.

People have tried to define and quarantine naughty content since time immemorial, and such efforts (and the debates they spawn) often prove to be messy and contentious. As it turns out, Google—a multinational corporation with near-unlimited resources—is just as confused as everyone else.

This story, "These are the filthy words Google voice search doesn't want to hear" was originally published by TechHive.

Evan lives in Brooklyn, NY and enjoys writing about what future may hold and taking long romantic walks on the beach.