Upgrading an aging PC is a bit of a crapshoot. Sure, a faster processor or GPU, more memory, or a solid state drive can significantly speed up a system. But figuring out which upgrade will yield the biggest performance increase depends on your particular use case and other bottlenecks in the rig.

If you don’t play any games, a more powerful graphics card may do you little good. And if you primarily run Microsoft Word, jumping from a dual-core processor to a 6-core beast may not yield any perceptible benefits. The same types of caveats apply to virtually all component upgrades. But if you need some additional horsepower and you have a few dollars in your pocket we can help you determine which system improvements offer the best boost for your buck.

Putting it to the test

We took a mainstream PC and upgraded its components one by one. After installing each upgrade, we tested the PC's performance, then returned it to its original configuration before upgrading the next component. Finally, we installed all the upgrades together, and tested it one more time. Our goal was to clearly illustrate the kind of performance benefits that would come by individually upgrading the processor, graphics card, memory, and storage.

We began this project with an Intel Core i3-4330 (Haswell)-based system with 8GB of system memory and a 640GB mainstream Western Digital 7200RPM hard drive. Visuals were handled by the Core i3’s integrated Intel HD 4600 graphics, and the system ran Windows 7 Ultimate x64. It’s not a dud of a PC by any means, but neither the CPU nor the integrated graphics was very powerful, the 8GB of memory was composed of a single DIMM, and the hard drive had many miles on it.

Most of the benchmark tests we used—Cinebench R15, SiSoft SANDRA 2014, and CrystalDiskMark—isolated the performance of individual components, though we threw PCMark 7 into the mix to show overall system performance as well.

The Core i3-4330 has all of the makings of a mainstream CPU: dual cores, low heat, and a $140 price point. It’s exactly the class of processor you’re likely to find in an affordable white-box or pre-built system at retail.

The upgrade we chose is Intel’s current top-of-the-line Haswell-based processor, the $339 Core i7-4770K. It has the same Intel HD 4600 series integrated graphics as the Core i3-4330, but it has double the cores (with HyperThreading support!), more cache, and higher clock speeds. Simply put, if you’ve got an LGA1150 motherboard, the Core i7-4770K is currently the fastest processor you can put in its socket. (Many users also upgrade their motherboards when upgrading their processors, but for the purposes of this article, we wanted to keep the rest of the system intact during testing, which is why we stuck to a single platform.)

In our tests, upgrading the system’s processor resulted in huge gains in the Cinebench CPU benchmark and boosted overall system performance by more than 17 percent.

Installing the faster CPU also increased transfer speeds on the hard drive, most likely because the drive was also being used as the operating system volume, and background tasks that would interrupt the drive benchmark were minimized with the faster processor.

The baseline system's memory was running at DDR3-1600 speeds—the maximum officially-supported frequency for desktop Haswell processors—but with only one DIMM module installed, it was running in a single-channel configuration, which limits available bandwidth.

We upgraded the system with a second 8GB DIMM (at a cost of about $80), resulting in dual-channel memory configuration and double the amount of memory bandwidth. Additional memory bandwidth helps keep the processor and integrated GPU fed with data, which can increase system performance in many situations.

This upgrade resulted in 17-plus percent performance boost in PCMark 7, and the system's graphics performance—as shown by Cinebench's OpenGL test—also increased significantly. 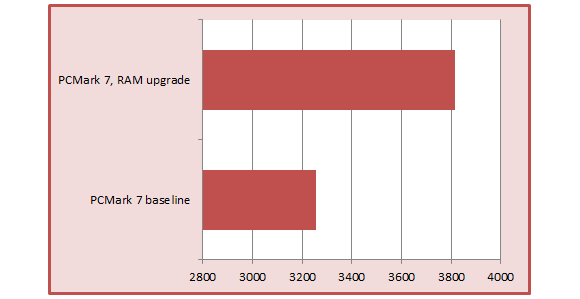 As SiSoft SANDRA shows, memory bandwidth essentially doubled with the second DIMM installed, which helps graphics performance quite a bit.