Dell and HP: No More Excuses

Combined, Dell and HP ship nearly half of all PCs sold in the U.S. According to tech industry research firm IDC, HP had just over 24 percent of the American PC market and Dell owned 23 percent in the third quarter of 2010. (Apple and Acer placed a distant third and fourth, each holding 10-plus percent.)

Year after year, readers proclaim HP one of the biggest losers in our Reliability and Service Survey. In 2004, for instance, HP and its Compaq brand were rated last in desktops, and next to last in notebooks and digital cameras. (HP did well that year in printers, however.) The company improved in 2005, earning average grades overall, but then fizzled again in 2007, 2008, and 2009.

Dell's scorecard has varied over the years, but recent trends are troubling. Its second-to-last laptop ranking in 2009 (only HP did worse) shows a marked decline from 2004 and 2005.

Interestingly, the perennial grumblings of Dell and HP customers haven't adversely impacted either company's bottom line. The assumption may be that because Dell and HP sell PCs at low margins in a tough market, they must minimize spending on support operations; yet HP's and Dell's revenue numbers from sales of PCs remain enviable.

Although Dell lost $4 million on its consumer business in the first half of 2010, the company made a total profit of $886 million during that time (that’s 16 percent more than it made in the same period last year). Dell’s lines for small and medium-size businesses accounted for much of its total profits: $636 million, a 34 percent increase from the first half of 2009.

Over at HP, the company’s Personal Systems Group--which includes desktop and notebook PCs, workstations, and handheld devices--saw a year-over-year earnings increase of 18 percent to $1.46 billion for the nine-month period ending July 31, 2010, according to an HP filing with the Securities and Exchange Commission. The company’s Imaging and Printing Group, which sells HP’s home printers, had a 1.66 percent earnings boost to $3.19 billion in the same period.

Meanwhile, several of Dell and HP's smaller competitors have maintained high survey scores year after year, despite competing in the same cutthroat markets as the Big Two. Asus and Toshiba, which duke it out with Dell and HP in the ultracompetitive Windows laptop market, earned high marks from our readers this year.

That raises the question: If Dell and HP have a profitable business model--one that has enabled them to control half of the U.S. PC market--are they sufficiently motivated to improve their support operations?

They should be. PC and peripheral manufacturers sell in a crowded market, and a customer with an unpleasant support experience is soon a former customer.

HP officials we spoke with expressed surprise at its poor showing in PCWorld's Reliability and Service Survey. The company has shown improvement recently in similar surveys, they say, including one from the American Customer Satisfaction Index, a University of Michigan business school study based on customer evaluations of the quality of goods and services bought in the United States.

"We're not happy until all of our customers are happy," says HP customer service executive Cliff Wagner. "There's clearly a lot of work that we're continuing to do, and a lot of investments that we're doing." 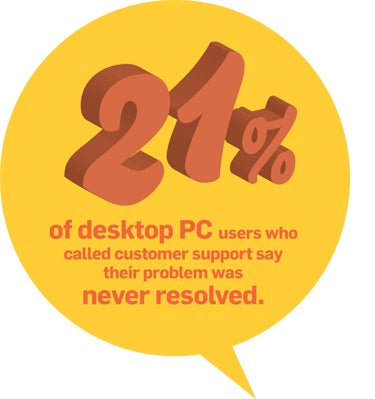 "We have not lost our focus on making sure that we're building customers for life," adds Jodi Schilling, vice president of HP customer support in North America. "We're continuing to make investments, not only in the support experience but also in product development."

If there's a glimmer of hope for HP, it's that users who bought machines within the last 12 months were much happier with the company's support of home desktops and notebooks. (Our one-year chart includes only survey respondents who have bought a PC or printer in the last 12 months.)

It's possible that HP's service and support operation devotes more resources to newer customers, resulting in higher satisfaction levels for this group.

Dell's 12-month results show little change, with home desktops and laptops that aren't particularly reliable, but with printers that are. Dell business laptops did get higher reliability grades on the one-year chart, but not enough to boost Dell's standing vis-à-vis the competition.

This year we separated Dell and HP business and home users in the laptop, desktop, and printer categories, in order to compare the satisfaction levels of the vendors' corporate and consumer customers. For a discussion of the results, see "2010 Reliability and Service: Laptops and Desktops."

It Takes Only One Frustrating Incident

IDC's O'Donnell points out that the home market is a challenge to support. But home users aren't simpletons either, and their frustrations are often born from bad support experiences rather than from self-inflicted slip-ups.

Dan Keller, a medical journalist in Glenside, Pennsylvania, bought an HP Pavilion desktop about three years ago. The CD drive faceplate arrived broken, and HP has yet to replace it, despite his many go-rounds with customer support, he says.

"It wasn't a run-of-the-mill problem, and they said, ‘That part doesn't exist,'" Keller says with a laugh. "I said, ‘Well, you're putting them on computers, they have to exist.'"

Despite the unresolved faceplate issue, Keller's desktop runs fine. But the frustrating support incident, combined with the poor keyboard layout and other design quirks of an HP laptop he bought recently from Costco (he has since returned it), has soured him on the vendor. "At this point, with two goofy machines, I think I would shy away from HP again," he says.

Currently reading
The Tech Brands You Can Trust

Every year PCWorld polls its knowledgeable readers to see which companies are providing the best...

They just sit there. And yet desktops continue to lag behind laptops in their durability and...

2010 Reliability and Service Survey: Smartphone and...

Apple's iPhone and Verizon's wireless service are the favorites of respondents in this year's...

Panasonic, one of the last plasma TV holdouts, topped a tightly packed group of HDTV manufacturers,...

Canon, long at the top of the printer category, faces new challengers.

Among camera owners in our survey this year, Panasonic has overtaken Canon.