Computex: Where the Tech Action Is This Week

Computex 2011 officially kicked off in Taiwan Tuesday and runs until June 4, with device makers and suppliers showing off their latest wares to a gadget-hungry crowd.

Intel is using Computex to challenge ARM's dominance in the tablet market. Asus announced three new devices including a 3D tablet, a smartphone-tablet combo and a MeeGo-based netbook. Google announced it was moving Chrome OS operations to Taiwan, Nvidia showed off a quad-core tablet, and ARM made some pretty bold claims about the future of its chip architecture.

Here's a breakdown of the latest happenings at Computex 2001 from May 31-June4.

It's a smartphone, it's a tablet, it's a Padfone? Asus announced on Monday a new smartphone-tablet combo that features an Android handset with a tablet shell that turns the phone into a one-panel slate. Both devices will have a front-facing camera for video conferencing, and Asus says the Padfone features native resolution on both devices. The Padfone is still in development, and the company hasn't settled on device specs yet, not to mention pricing or availability. This has led some critics to declare that the Padfone, while an interesting concept, is still vaporware at this point.

The Ultraportable PC Is Now the Ultrabook?

Intel wants to rebrand the ultraportable PC as the Ultrabook, promising laptops that are less than 0.8-inches thick, have longer battery life and are priced under $1000. One of the first Ultrabooks to hit the market will be Asus' 11.6-inch, 2.4-pound UX21 later in 2011. The first round of Ultrabooks will be followed by laptops in early 2012 with Ivy Bridge-based processors, followed by third-generation Core processors in 2013.

If a dual-boot Windows 7-MeeGo netbook from Asus doesn't grab you, how about a dual-OS Windows 7-Android Froyo tablet? ViewSonic showed off the ViewPad 10Pro, powered by Intel's new Oak Trail Atom Z670 1.5 GHz processor. The device runs Windows 7 natively and runs a virtualized version of Android. The device features 32GB of onboard storage, 3G connectivity, and 1080p video playback. The 10Pro will go on sale in June in Taiwan and will be priced between $700 and $800. ViewSonic has not yet committed to launching the 10Pro in the United States, according to IDG News Service. Another ViewSonic special hitting Taiwan this summer is the 0.84-pound ViewPad 7x running Android 3.0 (Gingerbread), which is powered by an Nvidia Tegra 2 chip.

ARM Holdings President Tudor Brown (shown here) said Monday that several companies including Nvidia, Marvell, and Calxeda were working on ARM-based servers. But, according to IDG News Service, you shouldn't expect to see them hit the market in large numbers until 2015. The next version of ARM's Cortex architecture will support virtualization and 64-bit software--two essential stepping-stones on the way to an ARM-based server lineup.

Brown also set another big milestone for ARM in 2015. The company expects to see ARM-based processors in more than half of the mobile PC market within the next four years including tablets and mini-notebooks. ARM currently has about 10 percent market share for mobile PCs, but with Microsoft's recent announcement of ARM support in Windows 8 (expected in 2012), ARM's goal may not be out of reach.

Kal-El landed in a tablet at Computex, and no I'm not talking about Superman, but the quad-core Nvidia Tegra chip for tablet devices. Nvidia at Computex showed a prototype tablet with a quad-core processor and 12-core GPU. Nvidia wasn't talking specs, but claimed the device was rendering a simple game called MadFinger in real time at more than 30 frames per second, according to IDG News Service. The device could also run the game for up to six hours on a single charge. Nvidia said Kal-El powered tablets will go on sale by September followed by smartphones in late 2011. Check out Nvidia's YouTube channel for a Kal-El gaming demo.

At Computex, Intel unveiled two new technologies that will help you improve your computer's sleep performance. The first is called Smart Connect and allows your PC to update web apps such as Twitter, Facebook and email while the computer is in sleep mode. So, the next time you wake your computer up your latest e-mail and social networking updates will be ready for you. The chipmaker also unveiled Rapid Start Technology, which is supposed to get your computer up and running in faster when it is in hibernation mode. Both technologies will be built into new Sandy Bridge Core processors during the second half of 2011.

Not wanting to lose the tablet market to ARM-based processors, Intel is showing off a slew of "Oak Trail" Atom Z670-based tablets at Computex from manufacturers such as Fujitsu, Lenovo, MSI, and Toshiba. The tablets were running either Windows 7 or Android Honeycomb. Acer is rumored to be coming out with an Oak Trail Honeycomb tablet in July.

Intel has high hopes for its new "Oak Trail" Atom processor and that it can win the tablet market from ARM. Intel is the leading processor in PCs, thanks to its decades long partnership with Microsoft, but has struggled to compete against ARM in the mobile market.

LG announced its first all-in-one PC during Computex, which it calls the LG V300. The top configuration of this all-in-one PC includes a Core i7 processor, a 750GB hard drive, 8GB of RAM, a Blu-ray player, and a 23-inch multitouch 3D LED display, according to Engadget. LG did not announce a U.S. launch date.

MSI is showing new X-Slim laptops at Computex that are less than an inch thick, contain the latest Intel and AMD processors, and offer over eight hours of battery life. It is also showing new tablets running Windows or Android at the Taipei trade show.

The X460 laptop uses Intel's second-generation Core i7 chips, part of the Sandy Bridge range of chips that started shipping earlier this year. It weighs 4.9 pounds, and has a 14-inch screen. It also uses Intel's Wireless Display technology, through which high-definition images can be wirelessly transmitted to TVs with specific receivers. The X370 laptop uses AMD's dual-core E-350 processor.

SanDisk has two new solid-state drive lines for tablets, laptops and other mobile devices. The new U100 drives for laptops are available in sizes from 8GB to 256GB. The SSDs use a SATA III interface that allows them to transfer data about twice as fast as their SanDisk P4 predecessors. Asus is using the U100 drives in its UX series Intel Core-based Ultrabooks. SanDisk's new iSSDs are geared for tablets and available in sizes from 8GB to 128GB. The new i100 drive is the world's smallest SSD with 128GB capacity, according to the company.

If you don't think Google is serious about pushing laptops loaded with its web-centric Chrome OS, think again. The search giant announced during Computex that it was opening a software engineering center in Taipei to work closely with Asian laptop makers on computers running Chrome OS, according to IDG News Service. Taiwan is home to companies such as Foxconn, Quanta and Compal that make hardware components for major computer companies such as Apple, Dell and Hewlett-Packard. Taiwan is also home to Asus and Acer.

The best free software for your PC 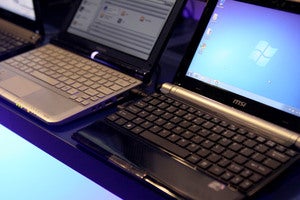