In case there was any doubt about that last one, Samsung sent out a teaser vid Monday with a thinly veiled reference to the fabled handset with curved, flowing text punctuated by the tagline, “The Future Unfolds.” Unless Samsung is engaging in some pretty epic trolling, that’s a pretty big clue.

Technically, the February 20 Unpacked event won’t be the first unveiling of Samsung’s folding-screen technology. At its developer’s conference in November, Samsung showed off something resembling a phone as part of its Infinity Flex display announcement. The blink-and-you-missed-it reveal didn’t show much—and what it did show was heavily obscured by a chunky case—but it was proof that Samsung was far enough along with folding OLED technology to create a working prototype. It touched off the folding phone hype and has led to this moment, the long-awaited folding phone reveal.

Since that glimpse of Samsung’s folding screen, little-known phone maker Royole has actually beat everyone to market with its FlexPai folding phone. Available on a limited basis, it showcases the issues with folding phones more than anything else. 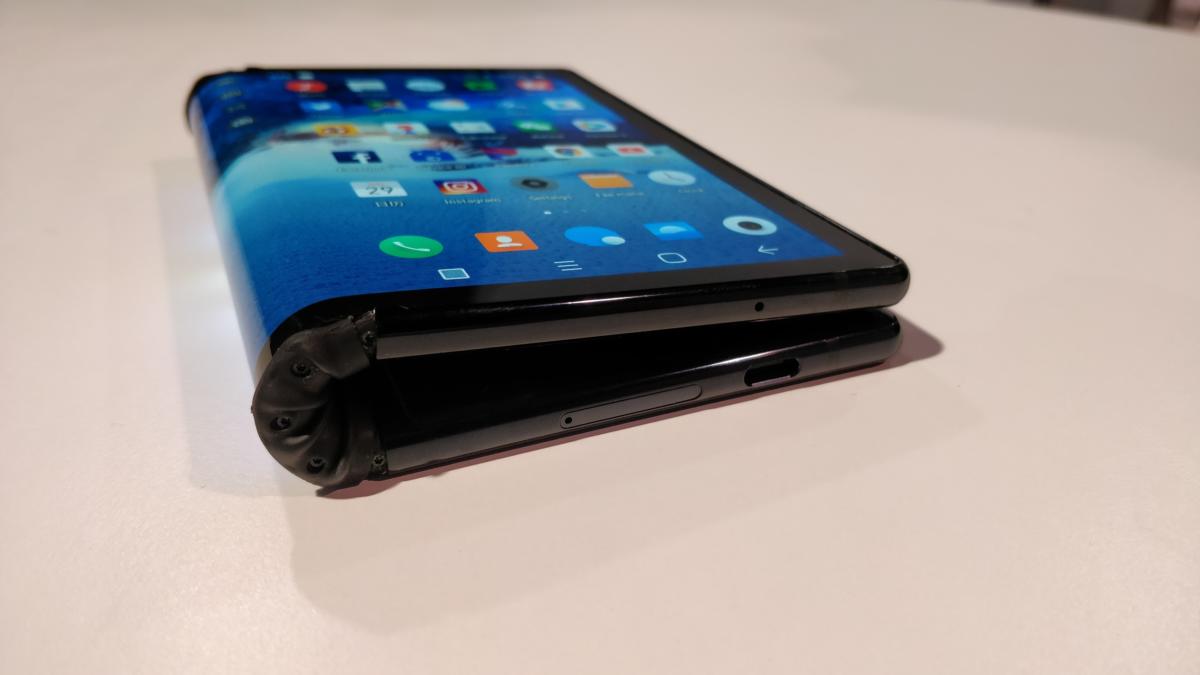 For one, the FlexPai doesn’t close tight like a laptop. The center hinge leaves a gap larger enough for a pen. And because it folds outwardly with the screen always showing, there’s a high likelihood for breakage, battery drain, and orientation confusion. Numerous videos on YouTube show the FlexPai getting confused when switching into tablet mode, or showing random flashes and stutters when bent. Whatever Samsung is working on will need to raise the bar considerably. And when the Galaxy F makes its debut, it will instantly become the gold standard for folding phones.

But the question remains: What will Samsung actually show us during Unpacked? Here are three possibilities:

A full working prototype of the final design

A fully working foldable phone is the Holy Grail, of course. If Samsung shows off the Galaxy F in all its glory, the audience will go wild. It’s been years since the Galaxy-loving crowd has had anything truly exciting to cheer about. A lengthy demo showcasing the design, features, and, of course, foldability, of its new phone would put Samsung back on the map and show why it’s still ahead of its competitors.
Odds: 10 to 1. I don’t expect Samsung is quite ready to show off its folding phone yet, so I suspect we’ll get more teases, some additional specs, and a vague shipping date of the second half of 2019.

A full demo of the new UI

More important than how the Galaxy F looks is how it works. We already got the smallest of glimpses of the new One UI during the original teaser vid, but to get people really amped up, we’re going to need a demo of it in action: smartphone mode, tablet mode, and, of course, a whole lot of folding. What happens when you’re working on the large screen and fold it to the smaller one? What if you get a phone call while on the tablet and want to put it to your ear? There are a ton of questions about the Galaxy F, and how it works is at the top of the list.
Odds: 4 to 1. It’s a pretty safe bet that Samsung will demo something about the folding phone, but I’m not convinced that it will be an original-iPhone-style demo of everything.

Remember that Samsung will already be unveiling three Galaxy S10 models during Unpacked, plus maybe new Galaxy Watches, so there might not be a whole lot of time left for a lengthy demo of a brand-new product as important as this one. Plus, the Galaxy F could very well still be going through design changes, with Samsung planning a dedicated folding phone event later in the year. So it’s possible, even likely, that Unpacked will bring a longer look at Samsung’s foldable display tech; maybe show off a few apps switching from the smaller to the larger screens; and provide a peek at a non-final phone design that will give an idea of the size and functionality of the shipping product—but leave lots of room for improvement.
Odds: Even. My money’s on Samsung keeping the Galaxy F close to the vest, but leaving us wanting more.

Michael Simon covers all things mobile for PCWorld and Macworld. You can usually find him with his nose buried in a screen. The best way to yell at him is on Twitter.