One of the complaints surrounding AMD’s efforts to ship mobile Ryzen chips for notebook PCs was a fundamental one: Where were the notebooks? On Monday, AMD answered. The company announced the second-gen Ryzen Pro mobile processor for commercial notebook PCs, which will appear first in notebooks from HP and Lenovo. 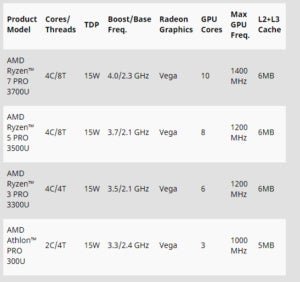 AMD claims the new processors will enable up to 10 hours of battery life, as measured by video playback, and will offer performance improvements over Intel’s Kaby-Lake R 8250U. Specifically, AMD said its Ryzen 5 3500U was 24 percent faster in Cinebench than the 8250U, and 227 percent faster in 3DMark’s Time Spy benchmark.

HP and Lenovo haven’t said what systems will ship with the new chips, only that they’ll be available this quarter. Other PC makers are expected to support the new chips later in 2019, AMD said.

At CES in Las Vegas in January, AMD chief executive Lisa Su was asked about the relative lack of AMD-powered notebooks. Su’s response suggested a lackluster initial showing: “I would say that the first-generation Ryzen notebooks were good, some of them were very good.”

Su continued with the promise of better things to come, saying one PC OEM planned to “triple” its designs. “It’s a journey,” as she described it: “We gained notebook share in the fourth quarter, and I think second-gen Ryzen is better than first, and third-generation Ryzen mobile will be better than second.”

What this means to you: For years, AMD has struggled to keep up with Intel in the mobile processor space, in part because performance lagged. Now, with more aggressive mobile Ryzen designs, AMD’s ready to try again. The endorsements of HP and Lenovo are significant, though it’s unclear how many different models will actually feature AMD’s new Ryzen Pro chips.